[V2] What are you currently playing?

I've been playing Spyro the Dragon the past week. First time I picked it up in over a decade so I thought I was long overdue.

Tales of Vesperia (PS4) - Loving replaying this! I can't remember much of it since playing it back on 360 so it's nice to remind myself of it all. I'm currently back in Halure after crossing those icy parts? I feel like I can't be too far from the end now. 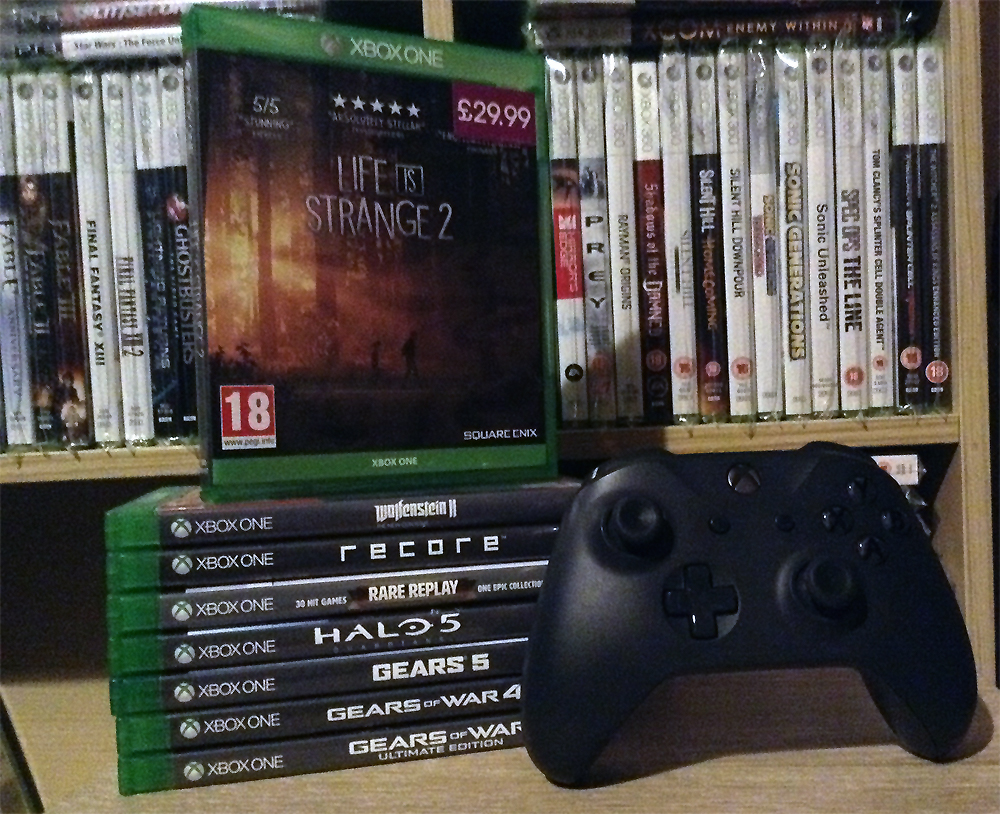 I got an Xbox One X this week, this is something I have been thinking over for a while and the prices have really dropped - I snagged one for £166 off eBay.

One of the big perks is that I can finally play Life Is Strange 2! I have a history with troubleshooting for this title! Firstly when then announced the complete Physical Edition, the PS4 version has the last Episode on code! This put me off sadly for a long time. Eventually when the game went cheap I purchased it on PS4, however this is when I had my PS5... This game in particular has a Demo which has save data that ties into the main game, well saldy a majority of PS4 Demos do not work on PS5! So, once again the experience of this game was hindered. Well now I have the Xbox One Version (Snagged that for £4.99 at GAME!) & interestingly enough the games last Episode is not on code! I do think it is a case that it has Episode 1 on disc and downloads the rest, but at this point I don't care! Now I can play the demo with the save data accessible in the main game!

How is the main game... GREAT!

Much like the 1st game it has had me hooked from the get go. What I love about LiS gameplay structure is that it allows you to explore at your own pace. Its very relaxing to control the character and navigate around the environments and hearing their little insights into the objects around. Then it has the more action based sequences, which are very intense not from their high explosions but brilliant scenario writing. Playing LiS2 has reminded me precisely why I loved the original game (My favourite game of the PS4 gen) I love character driven stories and interactive narratives and LiS games blend them two core components into a wonderful experience.

Thought I'd revisit an old favourite - Final Fantasy Tactics Advance. I know it's not everybody's cup of tea, but it was one of the first Final Fantasy games I ever played as a kid and still brings me great joy whenever I play through it again.

ArEmEe said:
Thought I'd revisit an old favourite - Final Fantasy Tactics Advance. I know it's not everybody's cup of tea, but it was one of the first Final Fantasy games I ever played as a kid and still brings me great joy whenever I play through it again.
Click to expand...

I played Advance before I played the original Tactics. I don't understand the hate for it, personally. I know the plot is more simplistic than Tactics, but if you treat it as its own thing, it isn't bad. It is an interesting example of an Isekai (a rarity in the Final Fantasy franchise), and I love how people have analysed the role of Marche over the years (noticing that, whilst the protagonist, he essentially fits the role attributed to villains in most games in his attempt to destroy crystals in order to destroy the world and bring back his own world).

It is also the game which introduced many of the races which would become Ivalicean staples going forward. The original Tactics only had humans, and Final Fantasy XII was yet to exist. When Final Fantasy XII finally released, I found gained extra pleasure in recognising some of the races (whereas some people were encountering them for the first time) as well as some of the familiar terminology (jagds, judges, etc).

I downloaded this when it was free ages ago but never touched it until last week. I played through it once and got a relatively good (but not perfect) ending, so I'll probably leave it at that for a long while.

I have mixed feelings about it, but on the whole I do think that this is perhaps Quantic Dream's most polished product to date. I remember Heavy Rain made my PS3 sound as if it was about to explode every time I played it, and the animations looks goofy. Detroit, however, is a huge step up from both that and Beyond: Two Souls.

It examines some staple science fiction tropes concerning artificial life, philosophical questions about what defines life, sentience, etc. It contains a nice variety of locations and characters (some of which I really liked, especially the relationship between the detectives was a highlight for me).

The more precise parallels between the robot slave revolution and struggles for racial equality were, however, too blatant to feel organic, it seemed. Not just that it was Detroit of all places, but the game makes connections with the Underground Railroad network for escaped slaves into Canada. Also androids are only allowed on the back of the bus, and so on. I'm sure this was designed to make us think and reflect on racial tensions in (all too recent) history, and humanity's awful reputation for fearing and hating anyone who doesn't belong to 'their own group', but I can understand some of the criticisms the game received that it might have appropriated it all a bit too much in a way which was a bit on-the-nose.

Attempting to get some Animal Crossing in with the major update. Did the Happy Home Paradise DLC and find myself designing a house before I inevitably pass out for the night.

Also working on getting in the FFVII:R Integrade with Yuffie finished. I think I'm near the end but it's a slow process for me. Really enjoying playing as her, actually. Her movements are very fluid and satisfying to use when landing hits. I feel like I'm at the end though, but we'll see.

Diablo 3 Eternal Collection - I am currently playing this game on my Nintendo Switch. It is one of the games that I was always interested on playing for so long and I finally managed to get it. It had a 50% discount this month and I quickly purchase it without hesitating. I've been playing it for countless hours and I still enjoying it as if it was the first day. Right now, I am farming for a armor set for my demon hunter build, which will take some time to do so.

Monster Hunter Rise - This is another game that I've been playing as well since it was released. I am just waiting for the expansion to come out to spend lots of hours on it.

FFXIV Endwalker and Guardians of the Galaxy.

Endwalker is a very great expansion for sure. I'll type up some notes at some point when I've actually finished it, but it has surpassed my expectations for sure. Plenty of things I did not see coming. And loads of mythological and historical allusions to keep me occupied for years to come...


Guardians of the Galaxy is a big surprise too. Unlike the Avengers game (which I never played) the characters don't look like cheaper knock-offs of the MCU characters. Or if they do, it doesn't seem to matter so much. In terms of mannerisms they are very much like their MCU counterparts, and I don't think that is a bad thing at all. But their character designs are close to their comic book counterparts. It works. The banter is great. The story is surprisingly compelling. The environments are breathtaking. The music rocks. The gameplay itself is actually pretty fun and varied. I have yet to complete it but this has also exceeded any expectations I had for it.