Did someone ask for more CHAOS? New story and character details for Stranger of Paradise Final Fantasy Origins 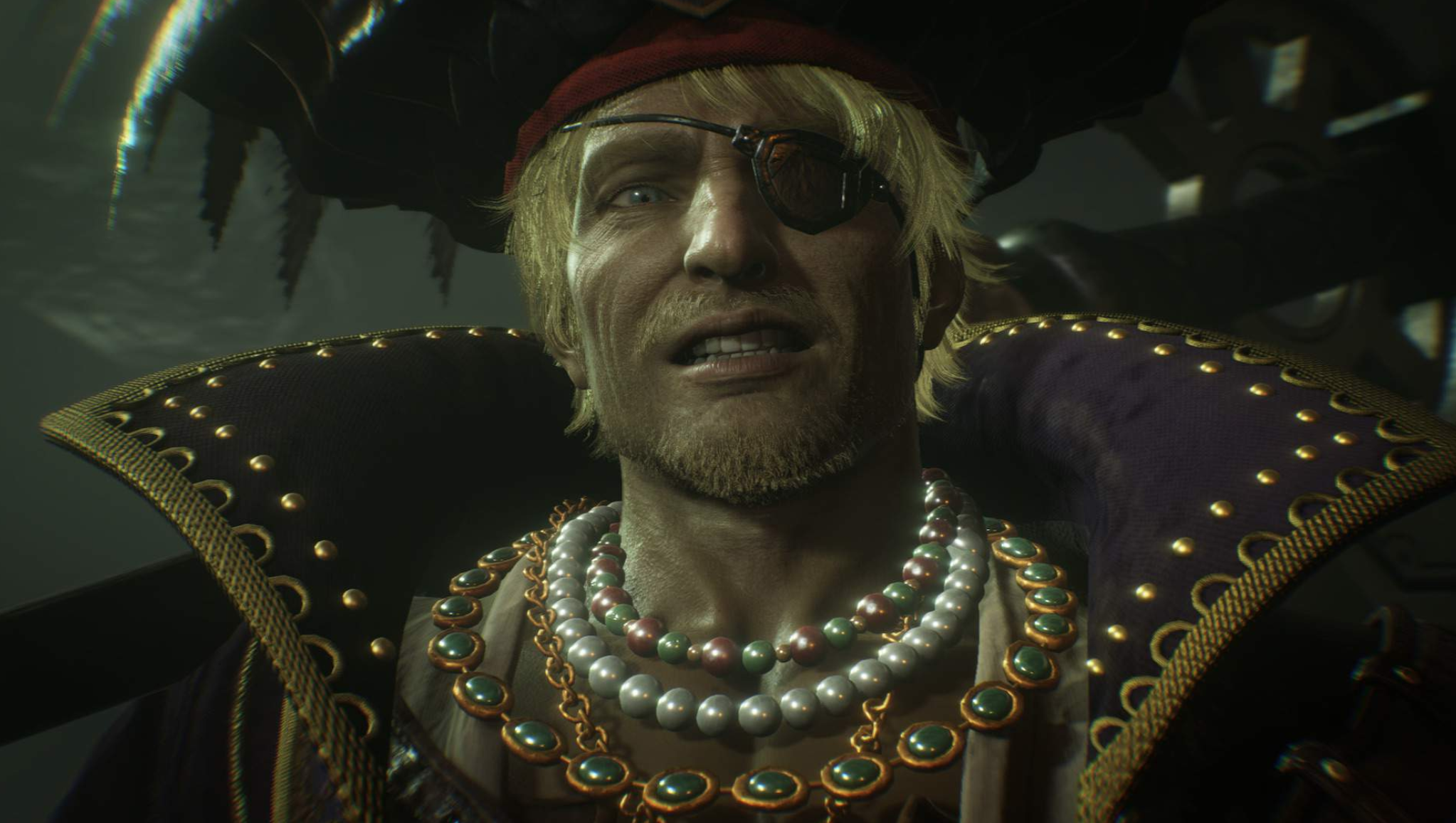 You've seen the memes. You've bashed your head against some fairly tough enemies in both demos. You've seen Jack cut off a party member's speech to march out of a castle while listening to Limp Bizkit through his Apple Earpods. But what, you no doubt must be asking right now, is the story of Stranger of Paradise Final Fantasy Origin all about? Who are the inhabitants of this bleak world whom we fight for?


For those of you who have played the very original Final Fantasy, you will likely recognise similar character names and plot beats. Four supposed Warriors of Light mysteriously show up in a world in dire need of heroes to restore light to four depleted crystals of the elements. Instead of four mute and nondescript avatars, you have Jack, Jed, Ash and newcomer Neon. 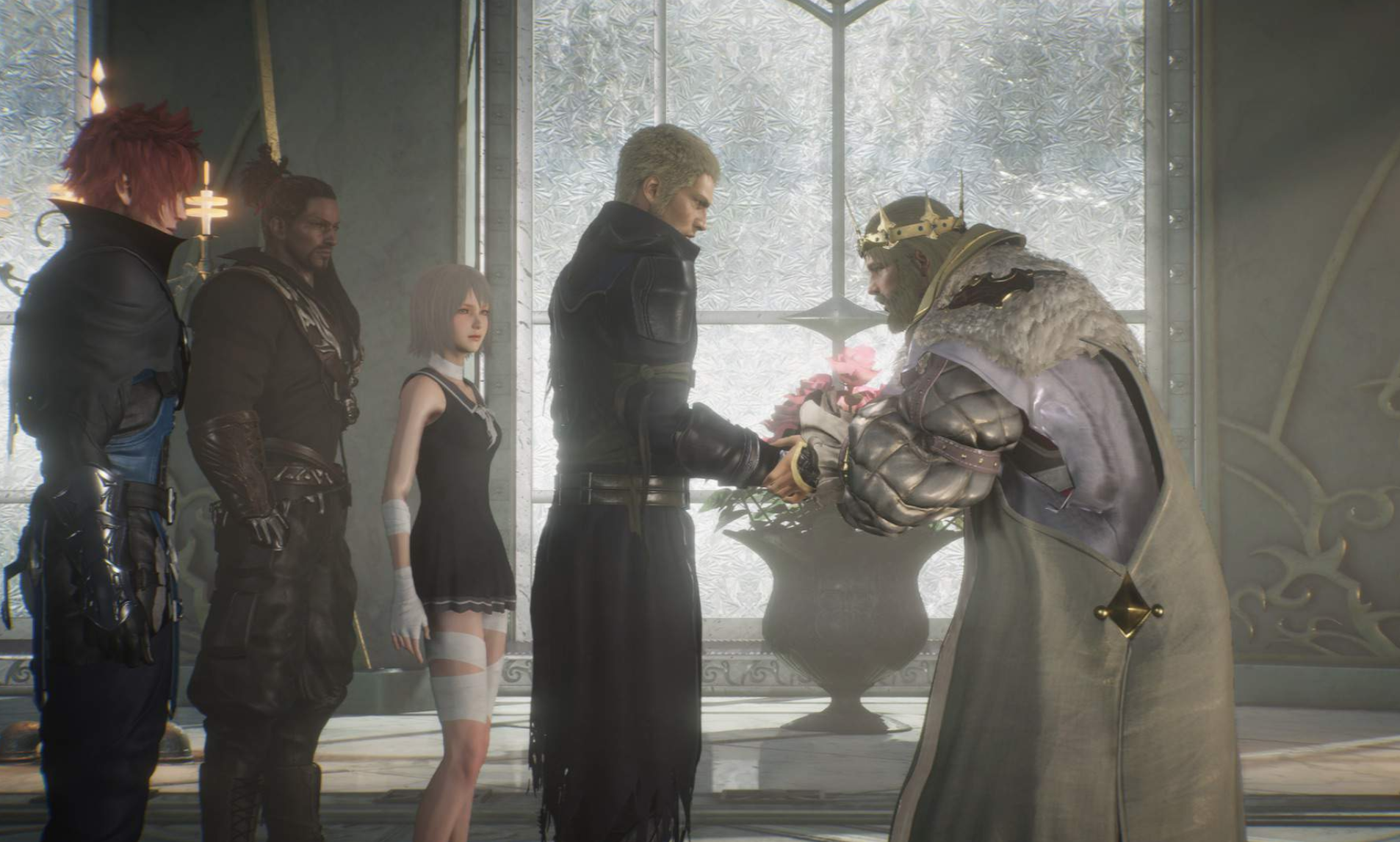 "Thank you, kind heroes. However, you will still need to purchase your own weapons and sundries. Do I look like a charity to you?"​
The King of Cornelia recounts to you the Prophecy of Lukahn. It brings tidings of four Warriors of Light who will vanquish the darkness, restore the light to the fading crystals and bring balance back to a slowly decaying and fetid land. The king believes Jack and company are these four warriors and entrusts them with such an auspicious mission.

But will it be so easy? Will restoring the light to the crystals truly rejuvenate the land and keep the darkness at bay? Or is more afoot than it seems? 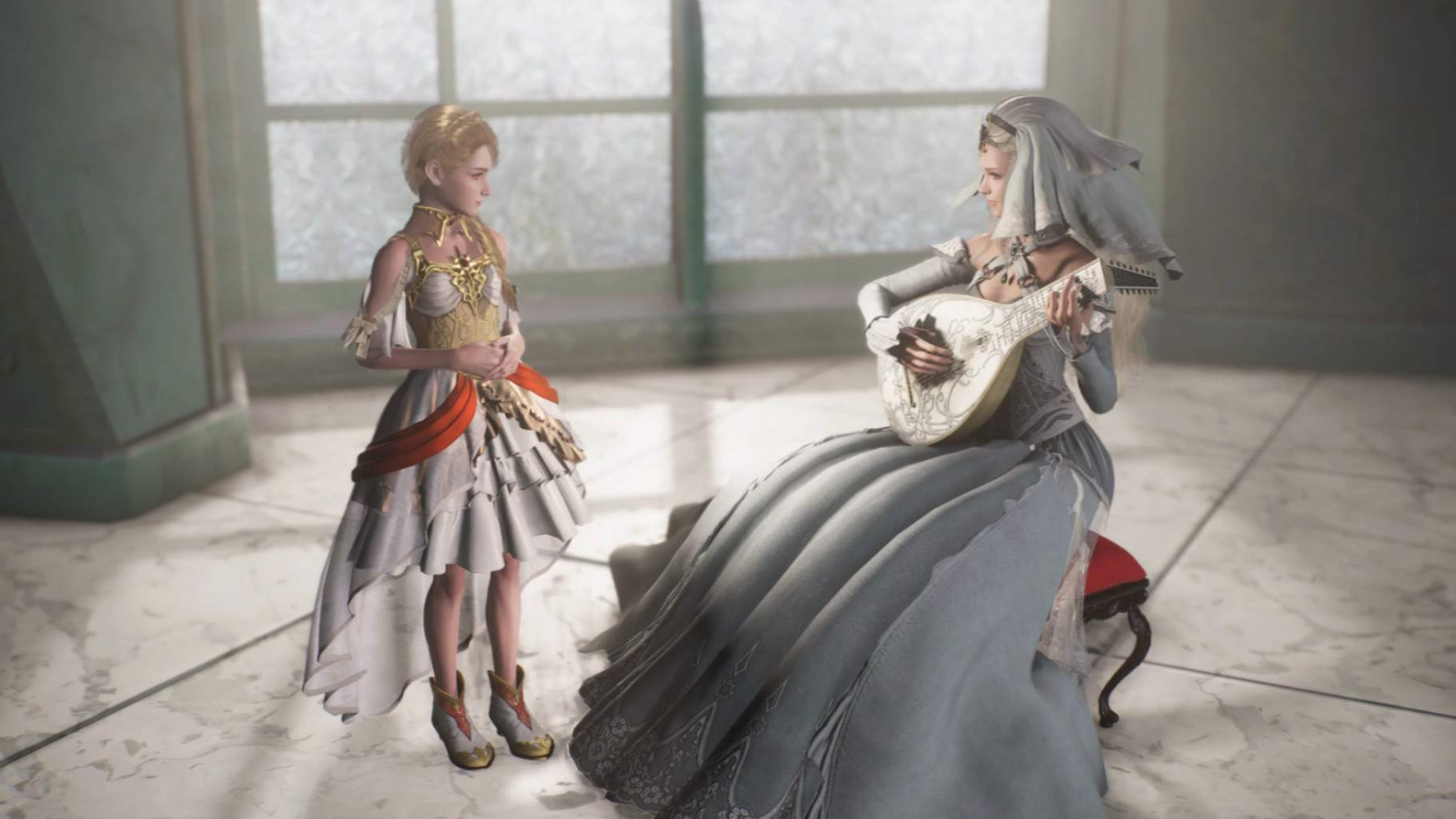 It's very nice of the king to have this big room with a piano stool but no piano anywhere in sight.​
Meanwhile, Princess Sarah plays the lute, while she observes these four strangers entering the castle to be granted audience with the king. Sarah's little sister, Mia, listens on enthralled. Let's hope Sarah doesn't have to bestow her one and only lute to the four adventurers at any point in the game. How will Mia find entertainment once that happens?

Having dealt with the false Garland at the Chaos Shrine and met the king of Cornelia, Jack, Jed, Ash and Neon set off to presumably find a boat. I guess Cornelia's vessels are all busy or something and there's no spare moored anywhere. The gang crosses a northern bridge from Cornelia and proceed to journey to the town of Pravoka. 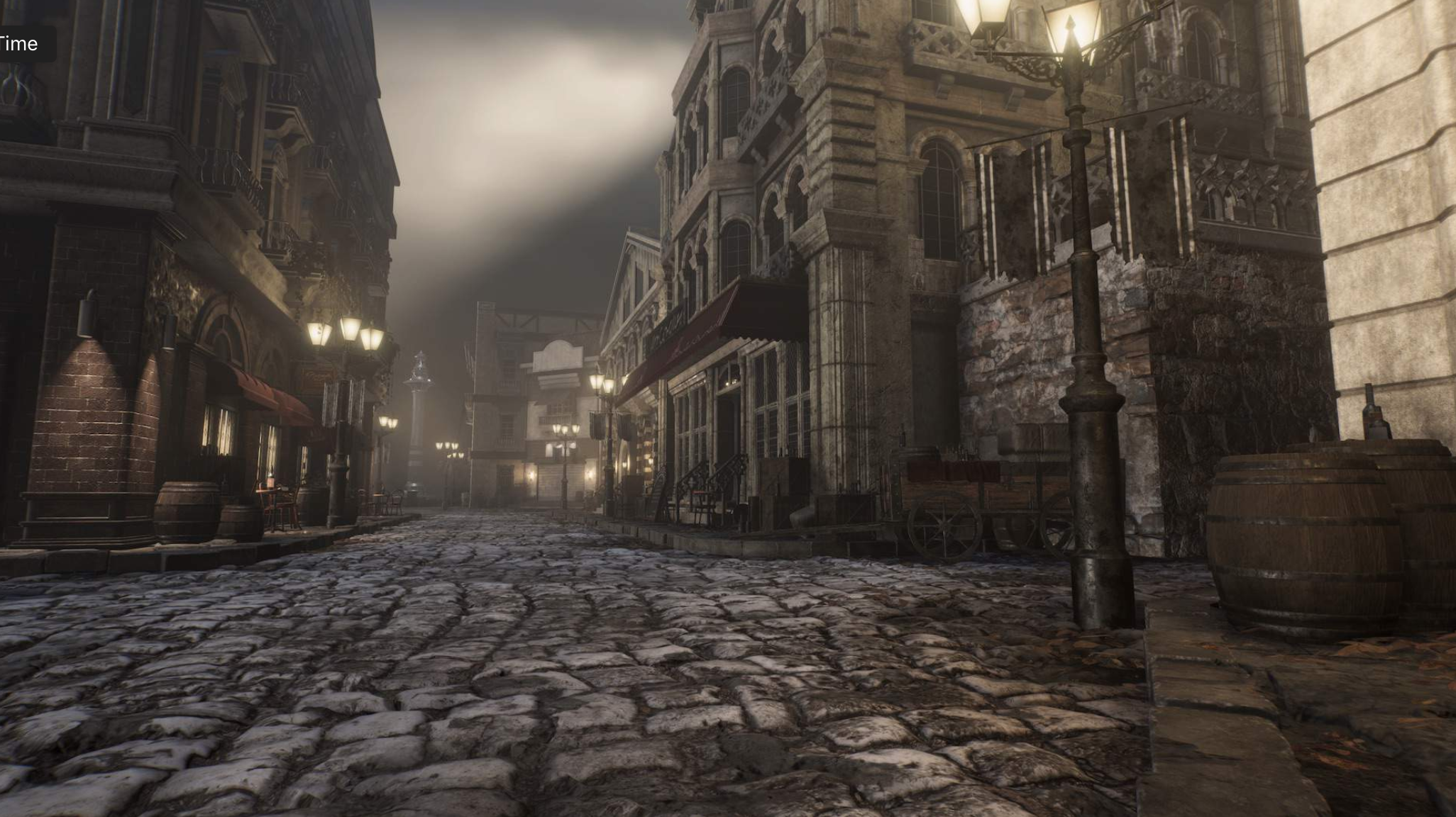 The inhabitants of Pravoka seem congenial. They too are looking for crystals with aid from the king of Cornelia. That's good and all, but Jack and company seek a seaworthy vessel. What is it with port cities not having boats readily available for our heroes?

So they venture off to do the next most logical thing. Journey through eerie, dank and dark caves and make their way to Sastasha Pravoka Seagrot. What luck! There appears to be a lovely furnished pirate ship docked there, ripe for Jack to umm...hijack. 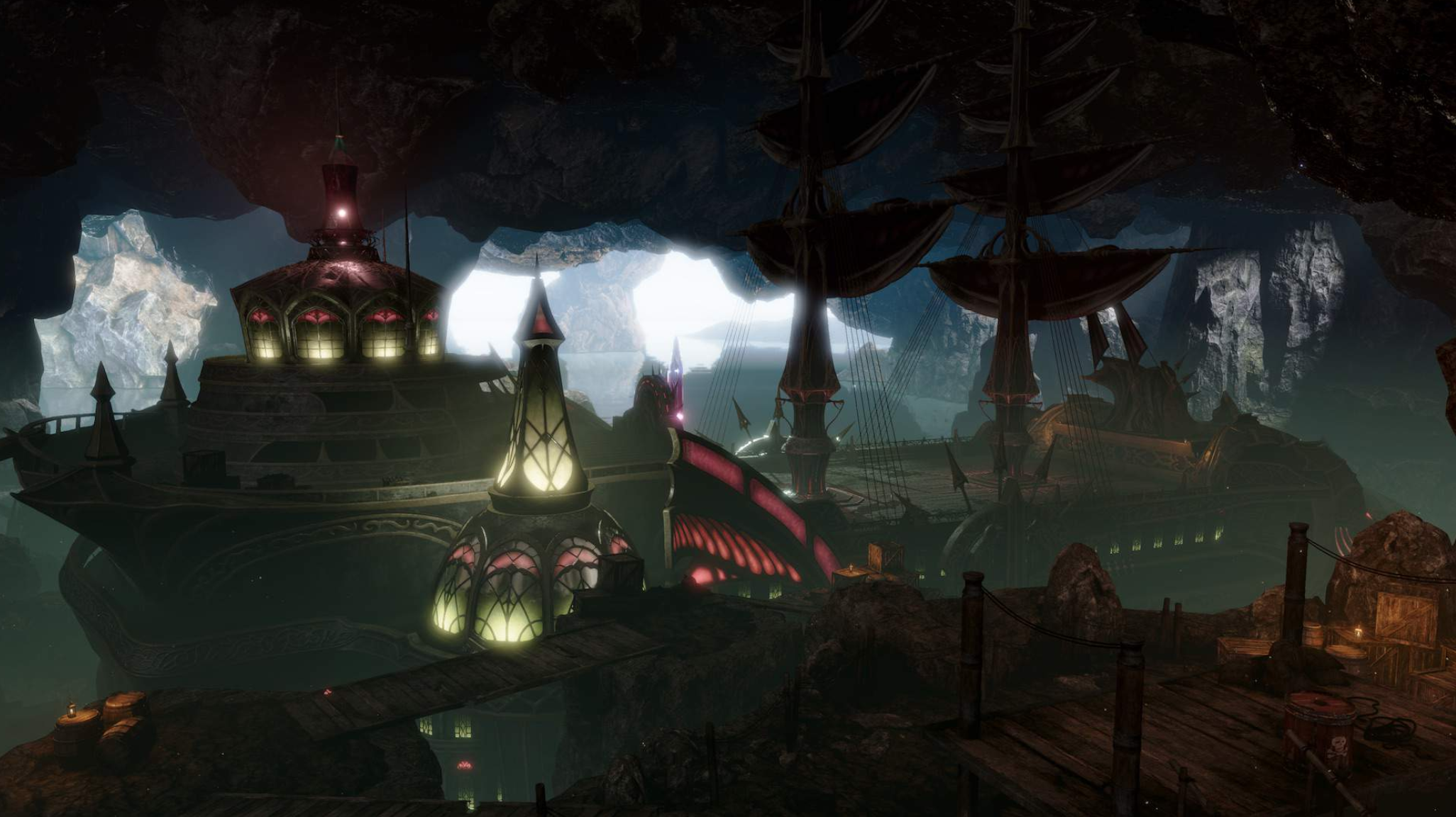 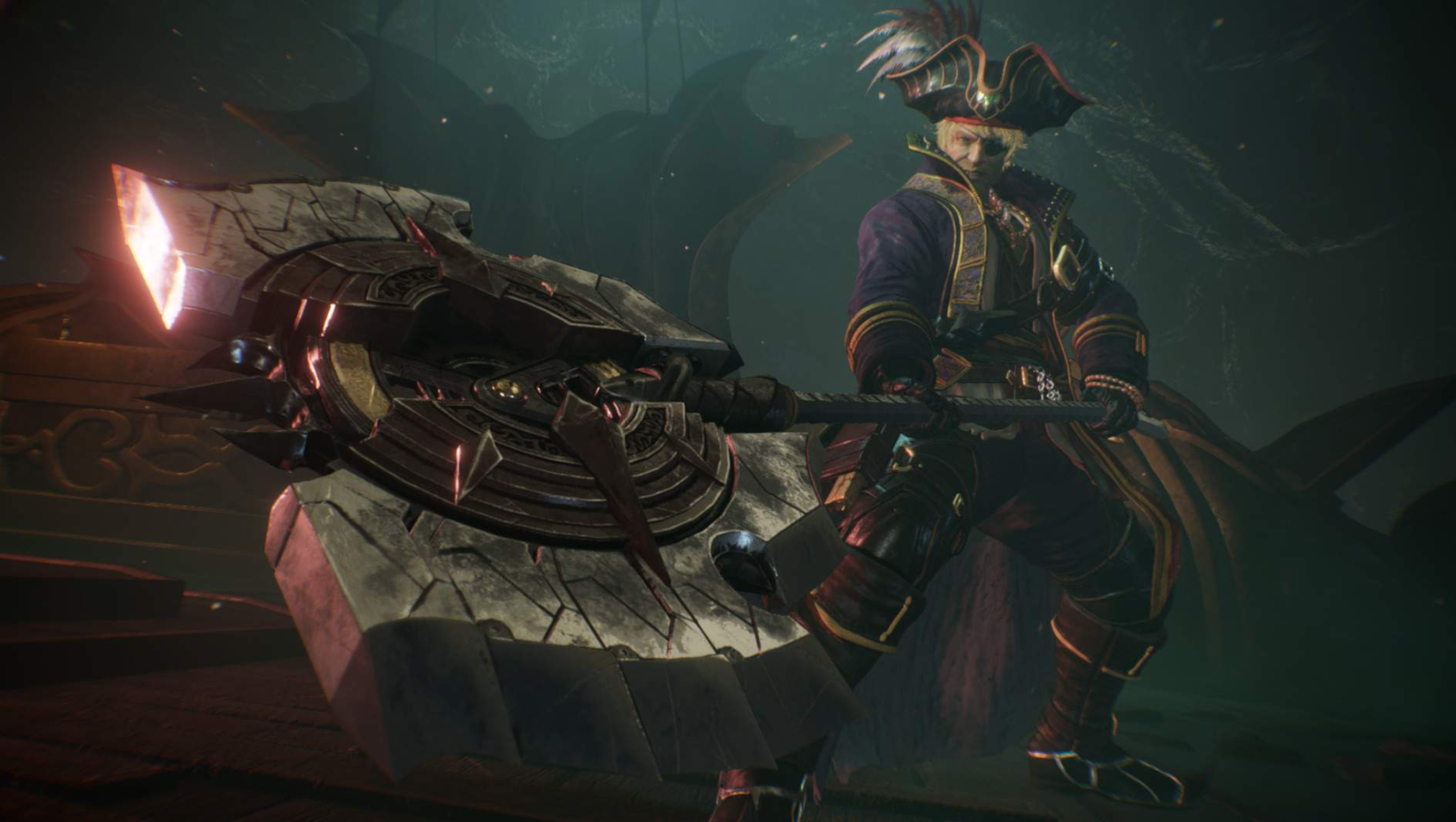 DUDE, JUST USE A BLUNDERBUSS LIKE ALL THE OTHER PIRATES!​
But heavens forfend! The ship's stalwart captain, Bikke, is not about to let you sail off with his baby. He brings out an axe that's almost as large as the hull of an actual ship and challenges you to mortal combat. 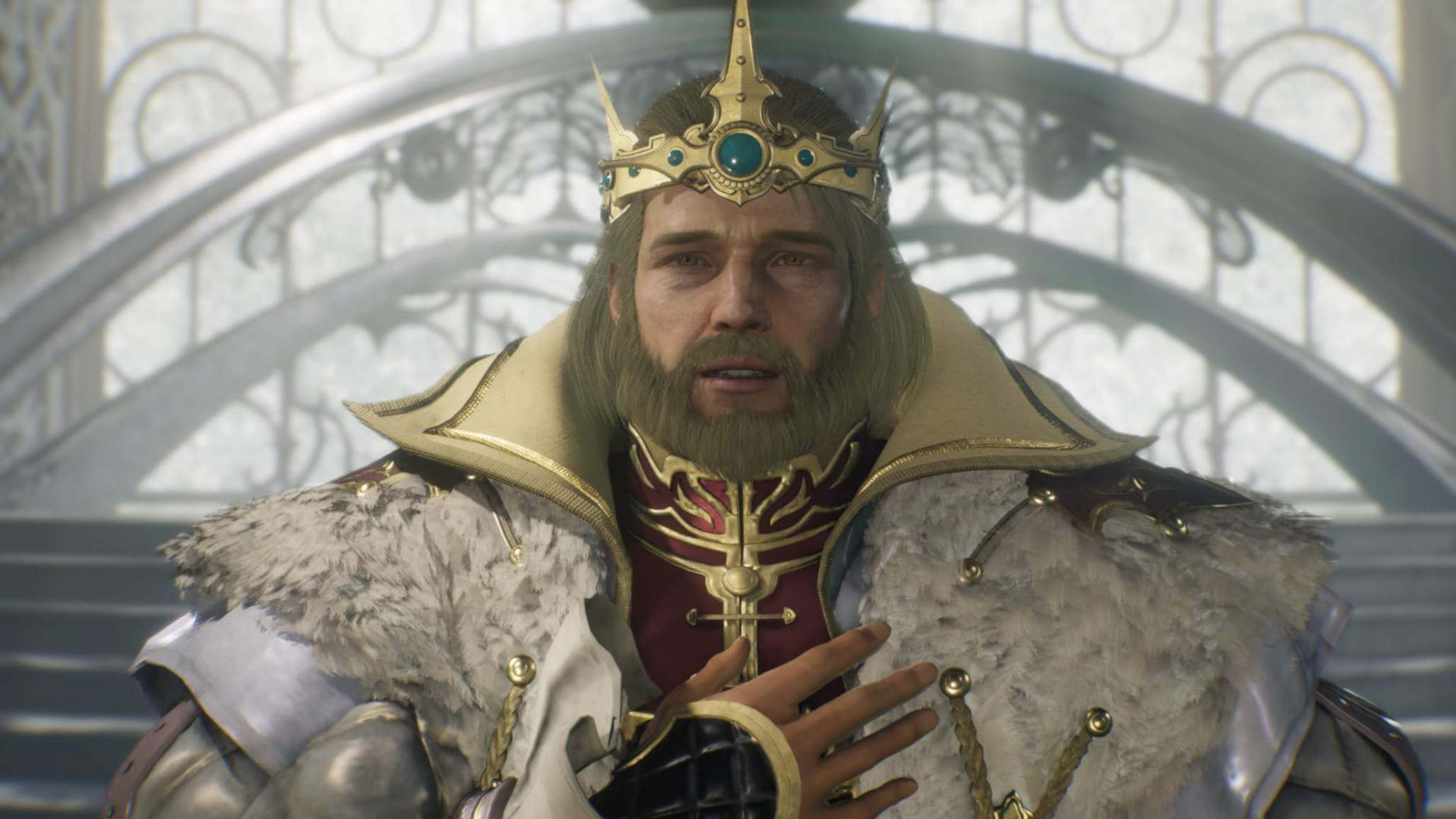 "Hello, I sure am looking forward to a full and long reign!"​
He has a crown and very kingly vestments. I believe this man might be a king or something. The unnamed king of Cornelia here is a bit fed up of all the darkness shrouding the land and ruining the real estate value of crown lands, so entrusts Jack and his company to deal with it. He is the one who tells the group of Lukahn's prophecy and is inspired by Jack's one track-minded desire to slay Chaos. 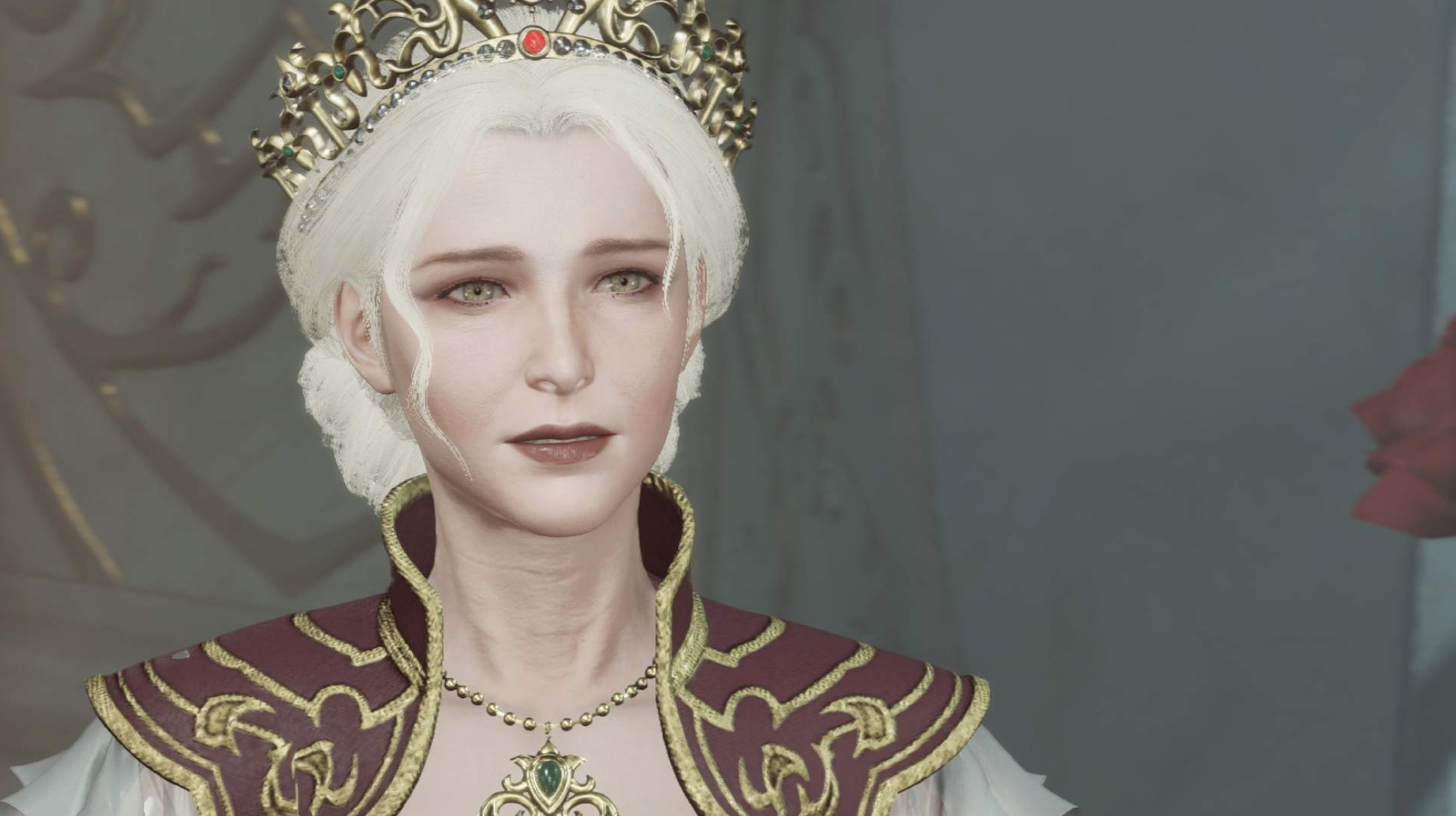 "If I have an actual name unlike my king husband, does that mean I am a more important character?"​
No, no, no. This is not a member of the Targaryen family. This is Queen Jayne, mother to Sarah & Mia and umm...there is not much to say about her. She is calm and grounded, and always puts her girls and the people of her nation first. Which sounds like she is also up there on the "how likely is it that this character will be snuffed out before the credits roll?" chart. 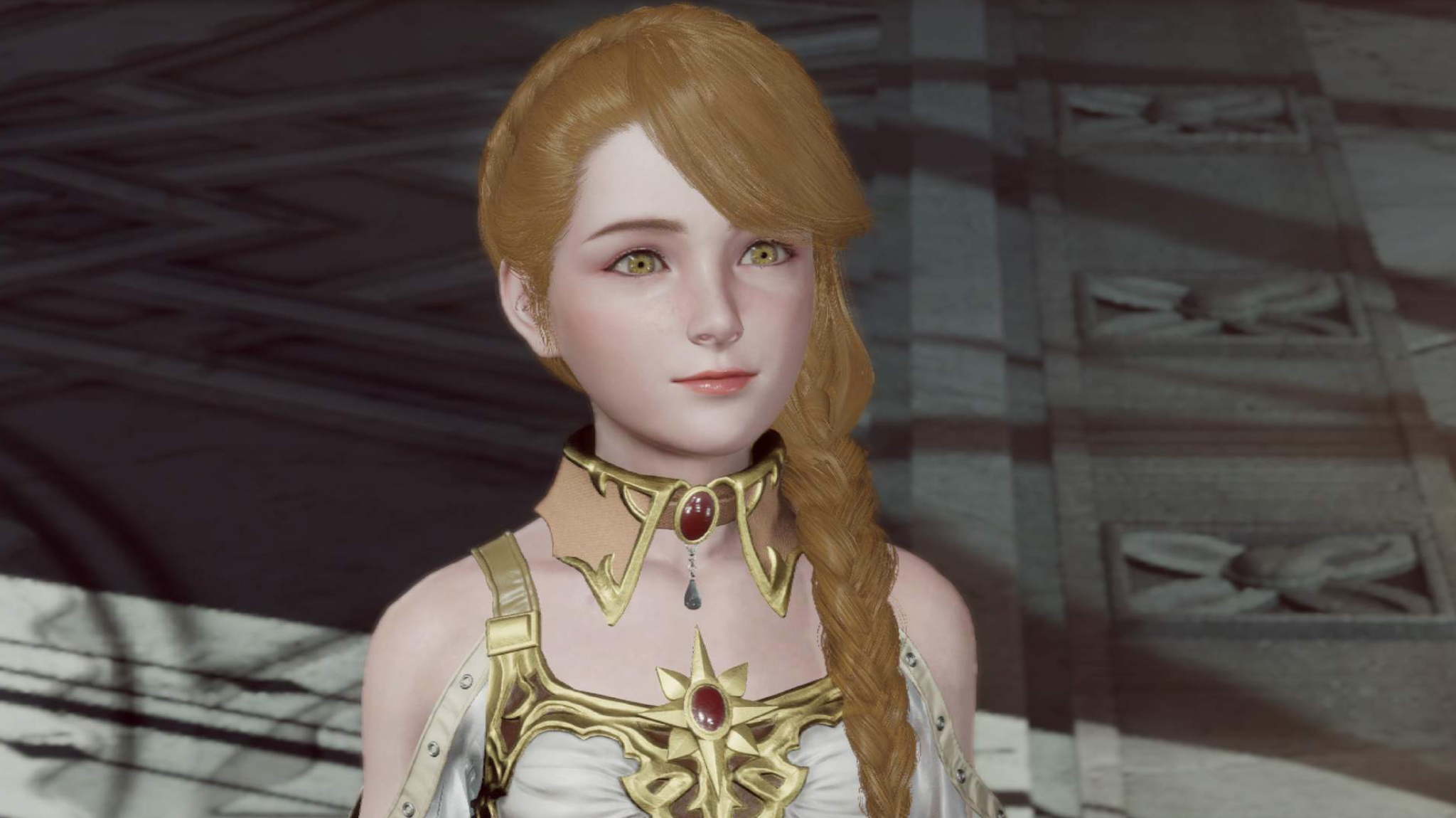 "If I look doe-eyed enough, do you think Chaos will spare my life?"​
Besides loving the sound of her sister playing the lute, Mia is...also a very conscientious person with a strong love for the people of Cornelia, I guess? At times, she's also even been known to confront ministers. You think running a government is bad enough, you now have to argue with a little girl as well. 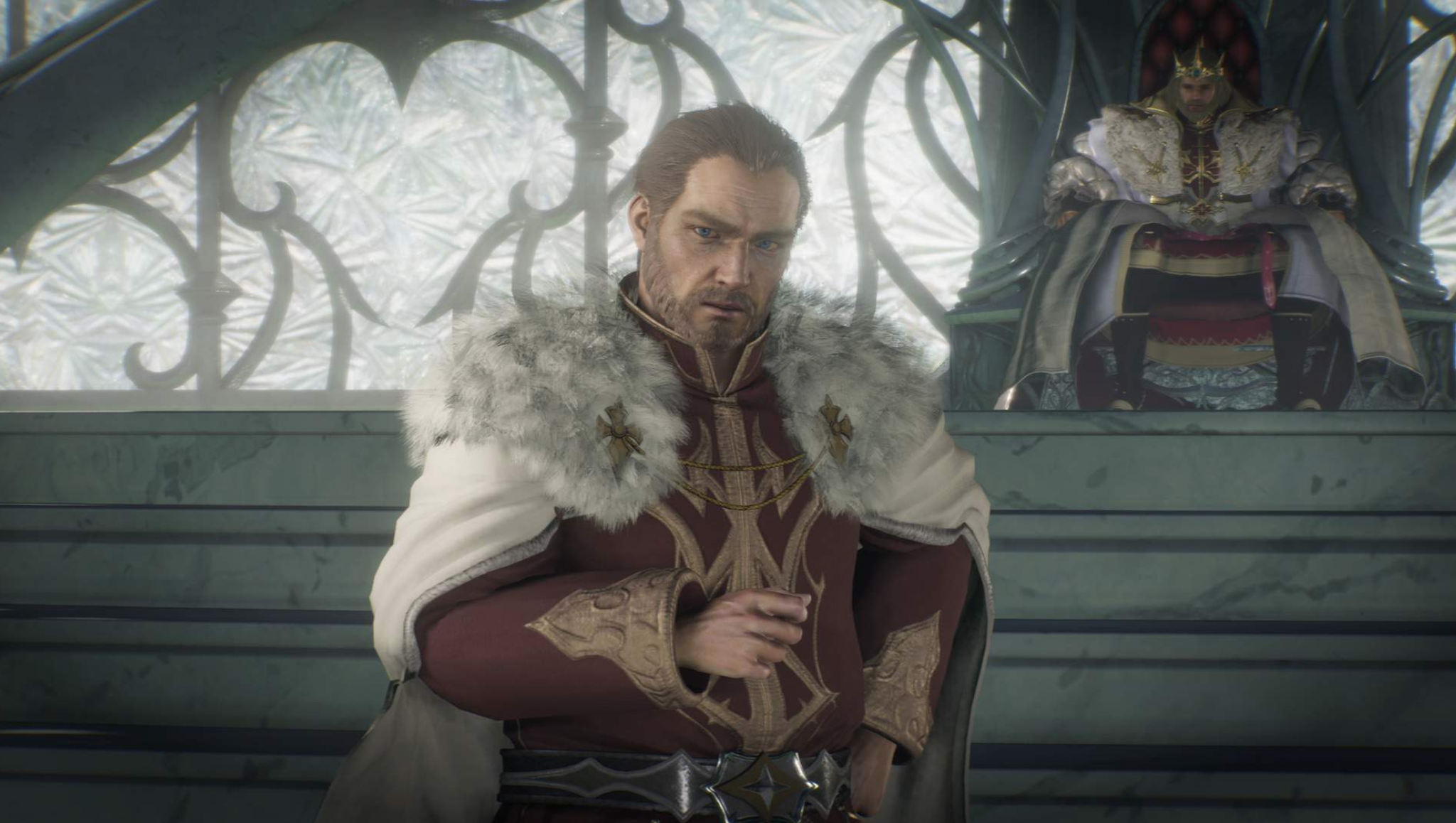 Lagone. More like La-goner, right? Right?....​
Look at him. You can tell he is a very serious and experienced man. And for some reason this man is relegated to the task of chronicling the journeys of Jack and his comrades for posterity, because who needs having a capable public servant to help run your government? Lagone is a shrewd man who tirelessly seeks out individuals able to carry out the prophecies of Lukahn. For whatever reason, he feels Jack and his team are qualified for the job. Joke's on him.

Captain...Owen Wilson? Wow...​
Captain Bikke loves the pirating life, but he is also the ruler of the town of Pravoka in place of a typical governor. Not the usual life choice for a pirate, you may say. That is because Bikke here, with his conspicuously decent dental health and lack of scurvy, can no longer carry on the pirate business. With the oceans blanketed in darkness, the ships that he would usually shoot at and pillage from aren't very incentivised to sail out to open waters anymore. So now he's stuck with a moored ship and bureaucracy. Lovely.

If you're interested to see how the tale goes from here, Stranger of Paradise Final Fantasy Origin is out on 18 March 2022 for PS4, PS5, Xbox Series X|S, Xbox One and PC via Epic Games Store.

Once inside, the creature purportedly forces slumbering victims into drinking vials of a mysterious substance known only tentatively as 'Fantasia'. Once ingested, it takes only 3 hours for the effects to fully take hold. The unsuspecting victim will wake to find themselves a Lalafell...
Excellent write-up, as usual!

And you are quite right that he looks a bit like Owen Wilson.
Pravoka also looks like a stunning locale. Definitely getting some piracy and smuggling vibes from that place.

I'm so happy that this game isn't just going to be running about in a dungeon trying to kiss Chaos.

I'm over the moon that this game will also feature Jack being a top-tier troll and playing Limp Bizkit in front of everybody just because he finds people's life histories boring.

I can't wait to see what Chad Jack will do to Bikke. Get him drunk and then steal his hat? Kick him into the jaws of the Kraken? Put ground pepper powder in his eyepatch?


Princess Sarah playing the lute could be pretty cool if they get her to actually sing songs, etc. Better still, Jack could nick it and play a medievalist reimagining of Papa Roach's Last Resort.