Is Valia Pira another FFIX allusion to previous games?

Hello, it's me again

I was floating around the FF Wiki page again looking up some crest information when I came across the page for the Valia Pira boss. In case you need a refresher, you fight Valia Pira during your time in the Desert Palace (AKA Kuja's Lair) where your character uses various bloodstones to deactivate it's various magical properties before engaging in it's boss battle.


I had a quick glance over of it and felt like this boss seemed a little familiar in some ways.

Now, FFIX is no doubt full of allusions to the previous games - just look over at the Tantarian thread for an example (and a shameless plug

) But I did a quick search and found no significant information in regards to it's overall appearance (aside from the triangle at the very bottom, which is Kuja's Emblem.) I couldn't really find any information on the Allusions page for this Boss, and I felt like it would have been too obvious for someone not to have noticed by now, so maaaaybe I'm reading too much into things...

But the top of this thing looks familiar right?


​
So initially when looking at the crown I thought how the middle two prongs looked very similar to a set of horns I've seen on a helm for one of the previous FF Characters. So naturally I went searching for a few characters that I *thought* matched this... and, well, I forgot exactly how many characters had horns on various armor and whatnot.

I kept going in circles, but I kept coming across Firion (FFII) but mostly in his 2nd & 3rd Dissidia outfits. 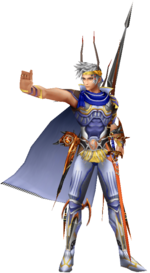 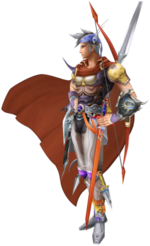 And... FFIX came out before Dissidia. But, Firion's costumes are influenced from Yoshitaka Amano's art, which apparently he was also one of several designers for FFIX. 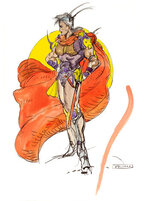 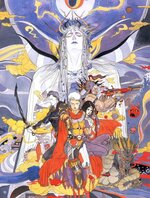 I also wanted to point out that the bottom portion of the purpley feathers looks sooomewhat like the face of Armano's other drawing for Emperor Mateus (also FFII) but that may also be a stretch of a stretch. 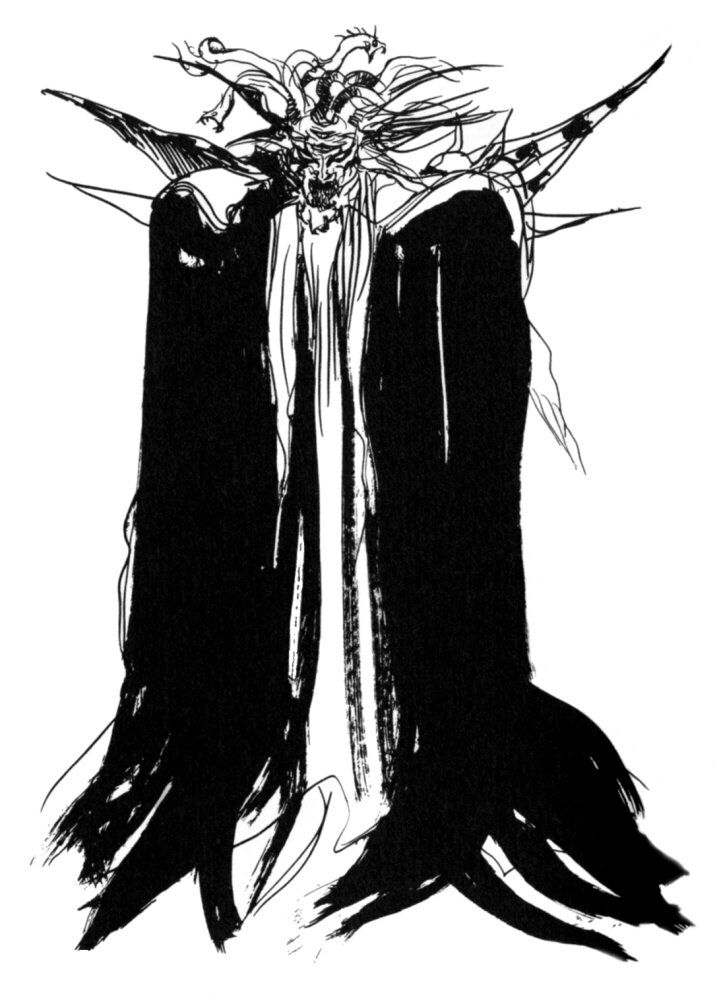 Another angle I was looking at was that the crown of the Valia Pira resembled that of Sorceress Edea (FFVIII) back piece resting on her shoulders, though this only works if you consider the middle two prongs as one conjoined piece, as there are 7 points to Edea's ornament vs the 8 on the Valia Pira. 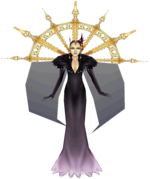 Looking at the center design with the purple feathers had me immediately thinking of Ultimecia as well, more specifically her final form in battle: 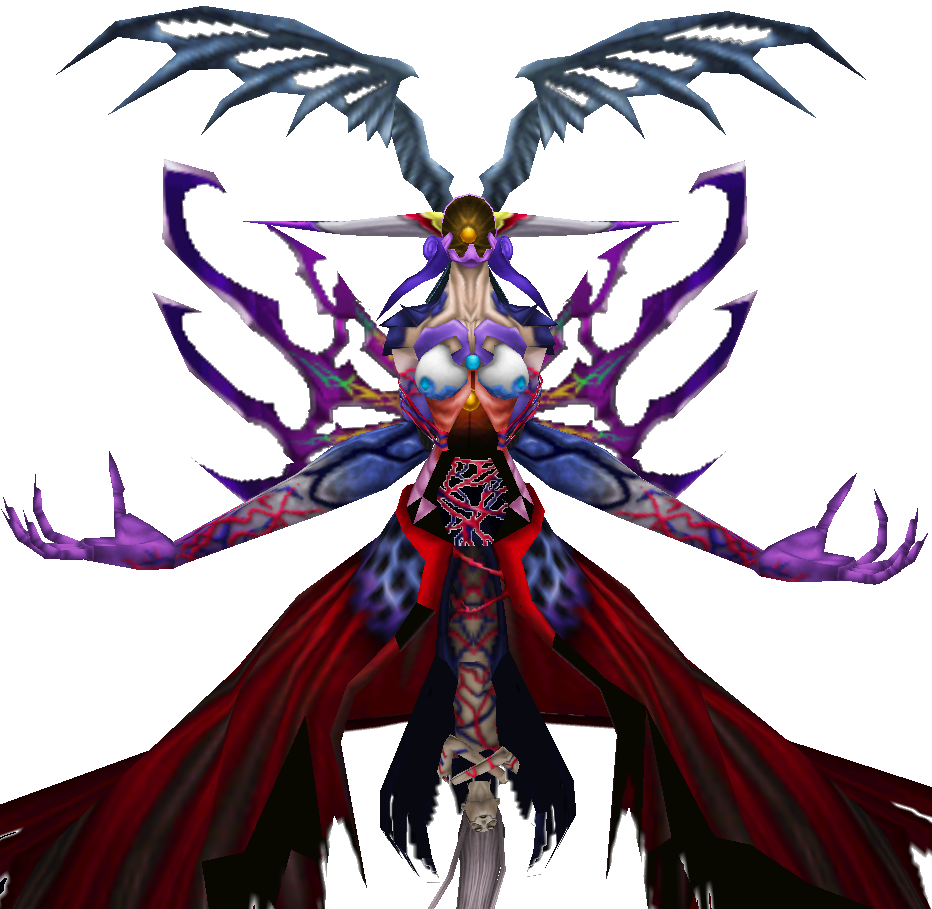 ​
I feel like this theory fits more if she's actually flipped upside down? I realize they are not exactly the same, though I'd find it poetic if they just did an artistic rendition of her... mess of a final form. Considering Ultimecia's initial form (below) has a lot more feathers It's plausible to think that it could also be a representation of Ultimecia with all her forms in mind as well. 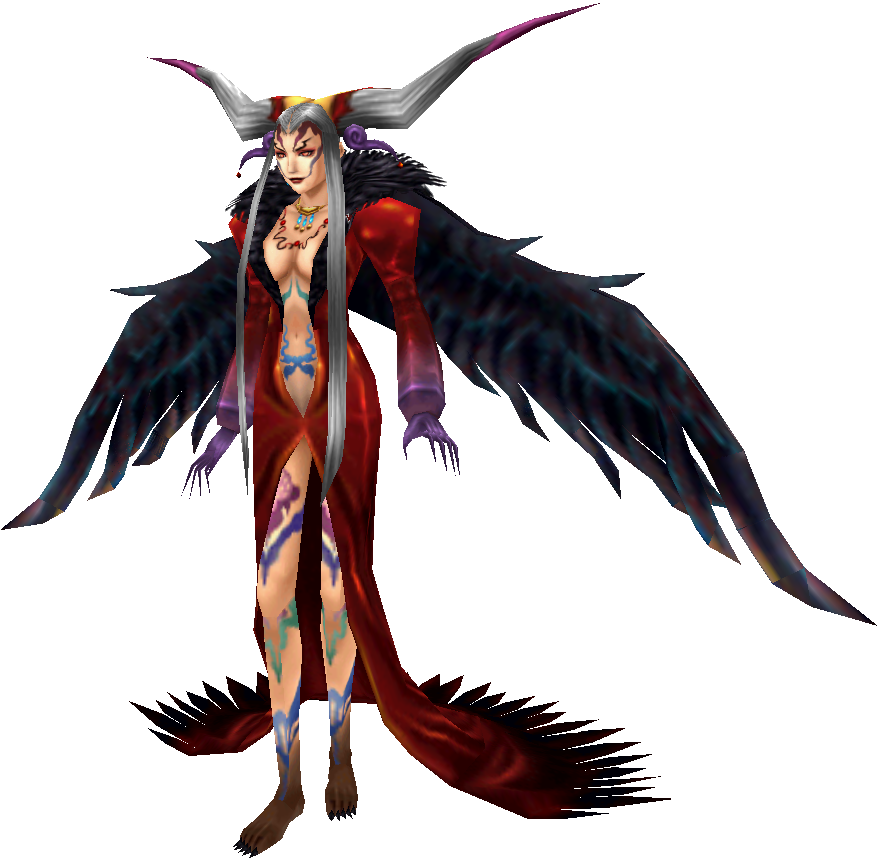 The only other thought I have is that it could also be a rendition of Necron, but as I said about Ultimecia, more of a artistic rendition. It would be an interesting foreshadowing if that were true! 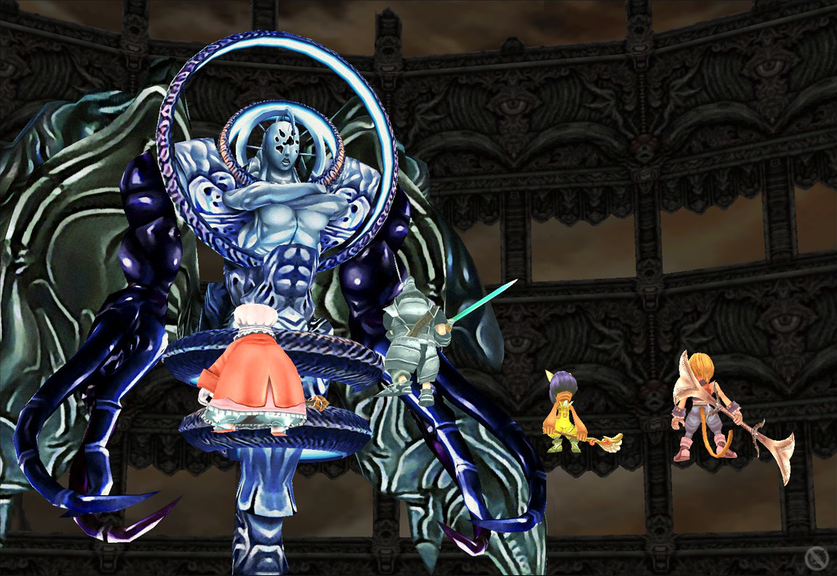 So, I dunno. Maybe it's a reach and I'm just being silly

But Valia Pira certainly has an interesting design nonetheless. Let me know if you think it's all just a bunch of nonsense, or if you think you have a better idea of what this design could actually be alluding to

It could be a combination of ff Villains. I think it is somewhat an Allusion to Kefka's final form due to the multiple Angel Wings but then again, Ultimecia, High Seraph Ultima, and Sephiroth had multi angel wings too. It could also be Ultimecia when she had possession over Edea. Who knows? Square is always up and behind many conspiracies in the FF world.

Edit: Possibly the Cloud of Darkness too. 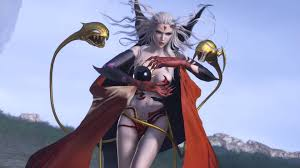 The spheres beside the triangles look somewhat like the Cloud Of Darkness' string pirana things
Last edited: Jan 19, 2021

The gate-like backpiece resting on Edea's shoulders does look a bit like the top of Valia Pira. This aspect of Edea's eccentric costume in itself may well represent sun symbolism with fingers of light emanating from a central point, a relatively widespread motif (think the Greek Helios' sun crown, the images of saints and Jesus, etc, in Christianity, and so on).


Sashikiru said:
The spheres beside the triangles look somewhat like the Cloud Of Darkness' string pirana things
Click to expand...

The spheres do look as if they might be joined with gold lines to the core pattern, so it might look as if they are 'string piranha things' (I like that term!) on that level at least. The spheres themselves I believe are triple Ying Yang variants (without dots), like the Gankyil / wheel of joy, or some other symbol. You can see three overlapping colours in each circle there (white, red and brown).

If the Valia Pira is a reference to earlier Final Fantasies in the ways described in this thread, I think it is fairly fitting. It is essentially a Terran security system or, at the very least, Kuja’s personal security system with probably Terran design plans (considering that Kuja himself is Terran in origin and that his creations in Gaia, such as the Black Mages, were modelled on Terran methods). Also connected to Terra, we have Garland being a reference to Final Fantasy I's villain, and his base of operations on Terra, Pandemonium, being a throwback to Emperor Palamecia’s hell capital in Final Fantasy II. So inspirations from these games for the design of Valia Pira would make some sense in this context.

Observing the central image within the object itself, multiple wings where the legs could be might also resemble Safer-Sephiroth. If so, that could be an interesting angle. While Safer Sephiroth has seven wings because of FFVII’s fetish for the number seven, the multiple wings give off Seraphim vibes. Seraphs, the highest rank of angels, traditionally had six wings, pointed in various directions.

I’m not so sure that that Valia Pira image represents a humanoid figure though. It is very difficult to tell from any image I have encountered of Valia Pira. It could even be a winged lobster…

Or, being more serious, it could represent an Egyptian scarab with wings outspread. This would also often be a representation of the sun. Although if that is true, while the colours wouldn’t be far off and it would fit nicely within the desert setting, the precise image and wing style of the Valia Pira image does not closely resemble the form of Egyptian artistic renderings of scarabs. A squashed one, maybe.

There are countless images of winged entities with which we might compare this, so I’d love to get a closer look at it to see more accurately what they may have been going for. Alas, I looked in my copy of the Ultimania Archive and found nothing about the Valia Pira. If there is more information out there about it, in another Ultimania or art book, I would love to see it.

But if it is some form of angelic being, even if non-humanoid, then it really does suit the Terran imagery. I discussed elsewhere how Garland is a custodian of the souls of ‘Fallen Angels’ (the Terrans) in Pandemonium (the Capital of Hell in John Milton’s Paradise Lost). Angelic (alongside demonic) imagery also exists in almost every screen at Desert Palace. 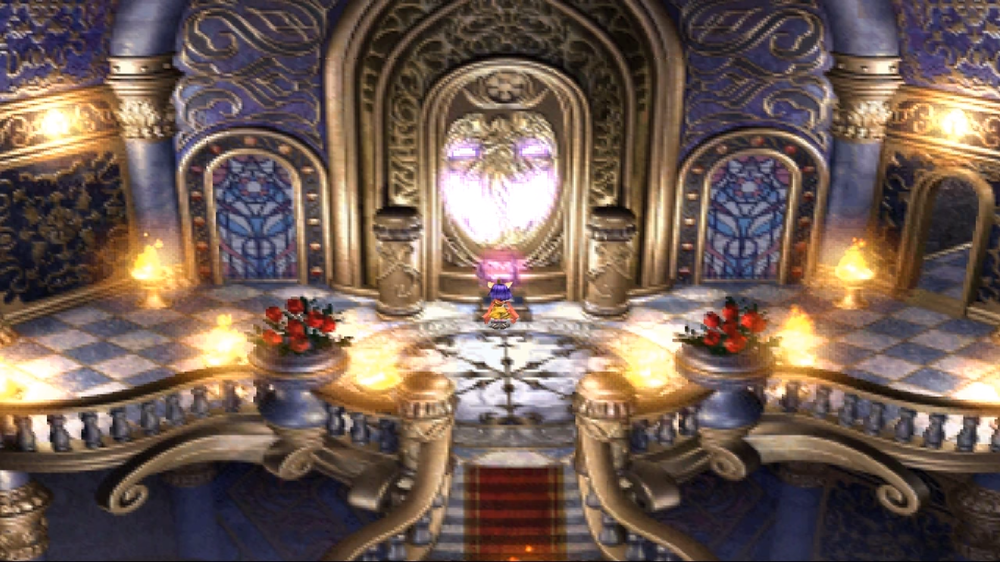 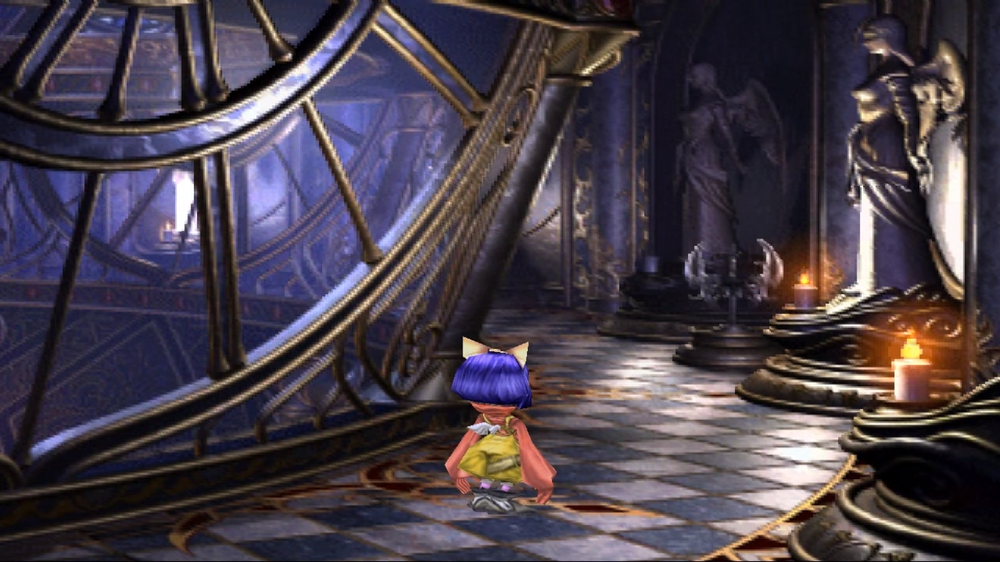 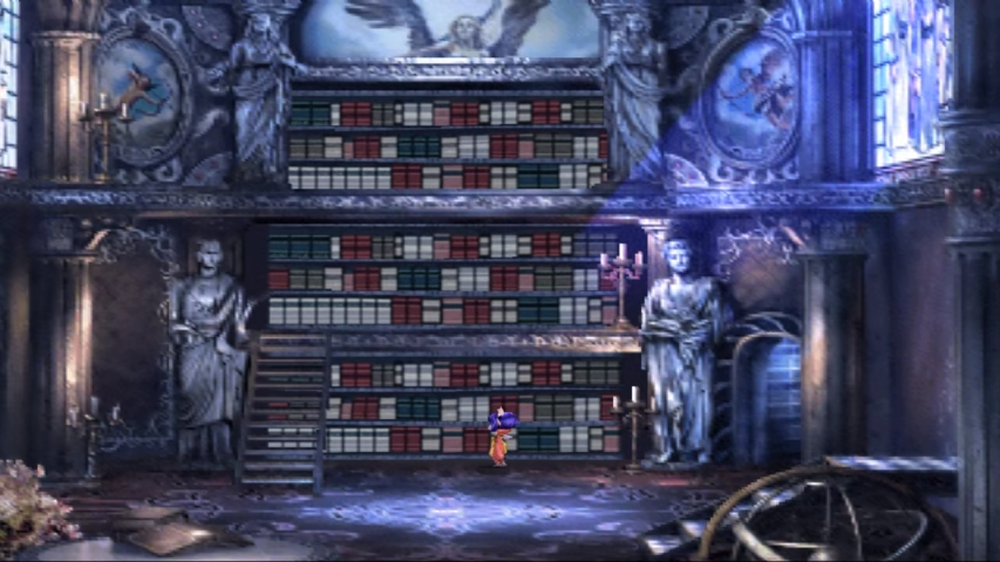 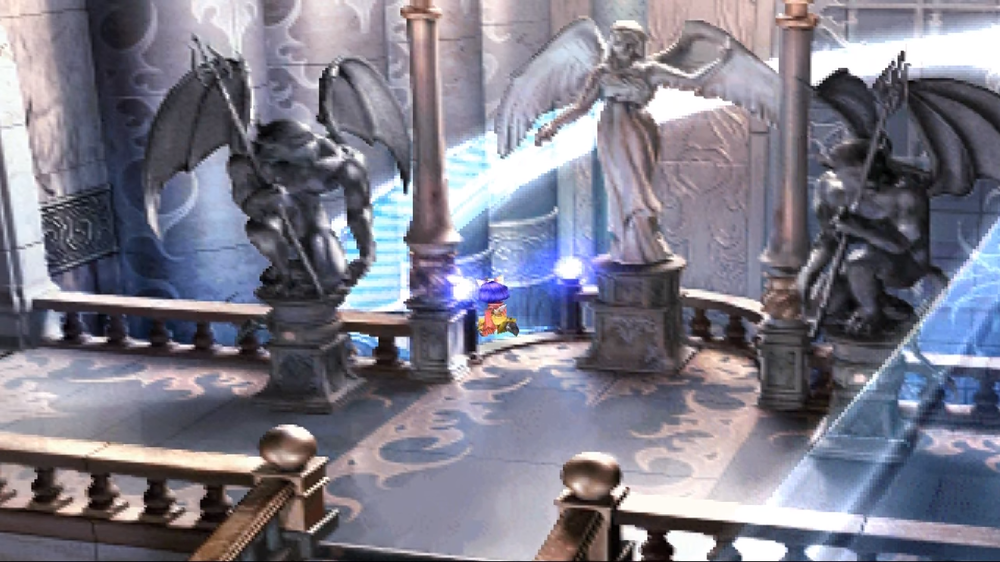 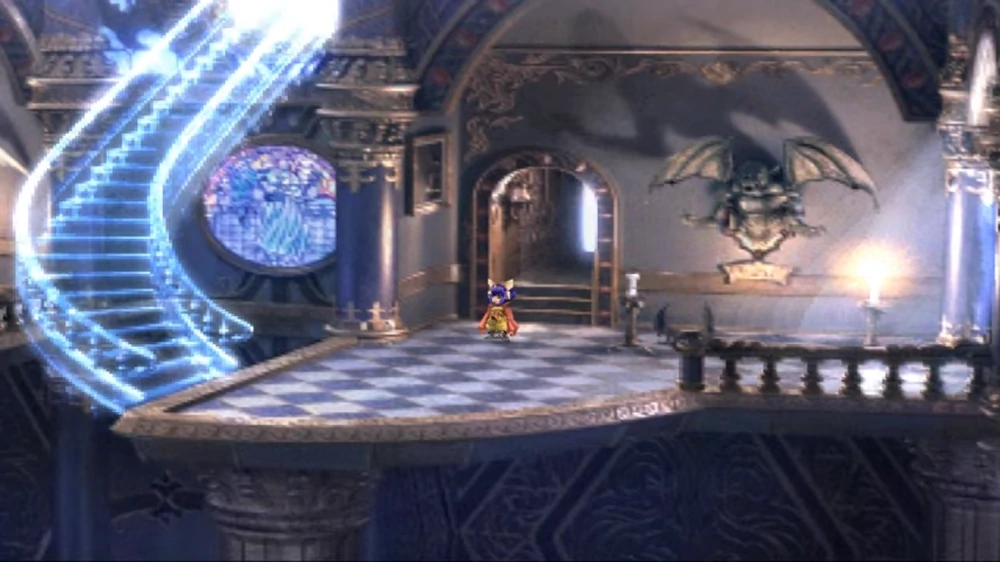 The Desert Palace being Kuja’s base is also important. Kuja is himself a fallen angel. His boss theme at the end of the game is Dark Messenger (although translated as Darkness of Eternity elsewhere). If we go for the name ‘Messenger’, a Greek word for ‘messenger’ is ἄγγελος / angelos from which our English word ‘angel’ stems. That’s fitting for the character, considering Garland’s original plan for Kuja, the role he ended up taking, and also his actions of shady, manipulative diplomacy with Alexandria.

About the overall appearance of the Valia Pira, it could also resemble the Lunatic Pandora of Final Fantasy VIII, in a flattened state..
I wouldn’t be surprised if there were some 2001: A Space Odyssey monolith inspirations with the Valia Pira too, maybe representing enlightenment and technological advancement of a primitive world (maybe the Gaians were like the primates in 2001: A Space Odyssey, until Terran technology like the Valia Pira altered their course). Kuja’s variant of the Terran symbol (itself modelled on the Illuminati symbol, likely - pyramids and eyes, etc) could also be a symbol of ‘enlightenment’, or disruptive, misguided, if not actively malicious enlightenment. 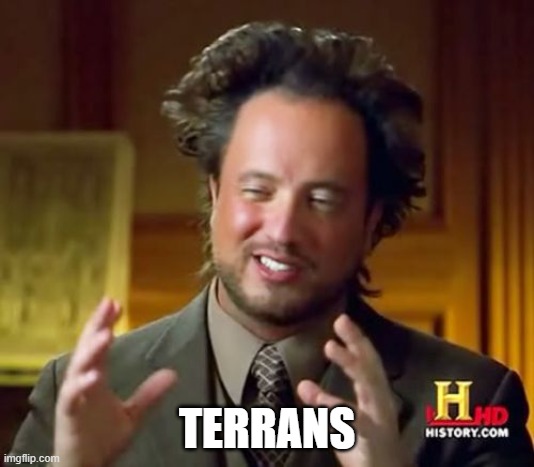