Mood: Dance with pressure
I didn’t have any relaxation during the holiday. My boss made the workplace become like hell in the atmosphere. I feel I was sunk into a sea of yelling and shouting.
My obsession with work makes me unable to write everything in Word because I would take sleep right after going home very late. I just keep everything inside my brain, like storing it in HDD. One day, I imagined that P6 was standing in front of Claudia's grave. He died by being erased from the game since his timeline was destroyed, and he then changed into a different version of himself in a new timeline. All his memories in the old timeline remained in his head so he could remember his love for Claudia. He apologized to her for lying about his name as Dante, but now he couldn’t tell her his actual name because it was erased during the Dissidia project in the old timeline. He apologized for making her suffer, but he felt happy seeing that she had gotten a better life in the new timeline. She married a man who was much kinder than P6. They together built a successful worldwide Cookie and Candy company named Shinra. They had a son like Cloud, who was just an average person and thus won’t become the central part of a tragic story. His best friend looked like Tifa, and their relationship was simple but sweet since they got their previous fates in memory. The new timeline was an actual FF world with magic everywhere, but there wasn’t still a miracle to help Claudia escape the nasty illness. After she passed away, her son was arranged to become the company’s successor and would marry Tifa in the future. The Fenrir in the new timeline were farmers and hunters, but all of them were annihilated by Cetra, who wanted to sleep well. Depending on the knowledge of fighting against mages in the old timeline, P6 could escape from annihilation. Along with finding R and the others, he wanted to see Claudia’s son and devised to protect him.
In the new timeline, the FF7 OG story never exists. The Cetra lived well and turned the world back to fantasy Medieval. R and his friends' families were erased from the old timeline. They had a new life, standing in somewhere to advertise the new storyline and guide new gamers to the game. While all characters in the world felt happy under the control of the Cetra, they were leftovers doing nothing. Unable to remember the proper names, they suffered from the old memories every day while smiling to welcome players.
To return to the old timeline, they must restore the FF7 story beginning by saving Jenova, no matter if a nation could be erased again. It made a team member feel not right and secretly broke their plan. Meanwhile, the couple Krammer had an idea of establishing an institute to help people fight against any evil mages using hi-tech, but they needed an agreement from the Cetra. Therefore they decided to bring their idea on TV. After a short advertisement for the superhero movie Gold Saucer Sentai team, played by singer Jessica, they were interviewed by a Cetra comedy MC. They felt they looked like Elon Musk during the show, while that guy was just Joe Rogan. As the couple rode home, they thought sullenly: It goes to waste.
Sorry for the lengthy post. I'm gonna leave the house with my wife and go somewhere fun to forget about work for a time. We could go to the movies. Hope it is well.
J

Two weeks into my diet where I've had to cut out all dairy, eggs, soy, and wheat... and it sucks. Like actually. I've lost a bit of weight already which is nice but I probably shouldn't lose much more haha. Oh well.

My throat condition that I've dealt with over the past few years is far worse than it used to be so it's this diet to see if I'm having a reaction from something. If not, then I'll probably have to to be on medication for the rest of my life. The former seemed like the better option - temporary pain for long-term gain; I'll be able to add one of those groups back in 4 months or so after another biopsy - but I've come to realise quite quickly that it sucks. SUCKS.

Almond milk is my go-to milk replacement and it's fantastic though.

Mood: true meaning of a famous poem : " things that no one shall ever see by own eyes, we saw one by one.
i am Iranian so you may got the picture now. i can tell you these days i hate " Turks" more that any other Roles in FFvii. we have a lot lot Turks these days here. and i guess yesterday they did something that can be said like : "dropping the plate" .
honestly guys. my head is about to explode.
Vincent valentine was most lucky person in FFvii . he slept 30 years. i wish i could do same.
PS: i always hated tsang until i played crisis core. i was going to like him but these days , no . because we are dealing with real ones. they aren't interesting at all!

Early bday spa weekend for me soon, just waiting for my mate to come pick me up, i was supposed to drive but shes drawn the short straw again, i did offer to drive her car though. How times have changed though, time was I'd be on a weekend long bender, instead ive not drunk for 2 years and ive packed two books and a puzzle book for a weekends worth of chilling and spa treatments. I hope she hurries up i cant wait to kick off the weekend of leisure 🤣

I guess I'm in the middle of the January blues or something. I've had a lot of highs and lows, except the highs are just a natural resting state and my lows are baritone.

Christmas events also left me with a lot of negative thoughts after I felt a bit slighted by a few different people, but I've been trying to leave that all behind in 2022. Lots of things (that I don't want to do) need to be done of course, and my anxiety adds this nice extra spice to the mix that just feels like pure chaos and circus music, so I guess I'm basically Kefka now. I'm not really sure what's up, I just feel a lot of invisible pressure from not-real things and a lot of self-criticism that is probably unnecessary. Lots of mental circles, beating myself up, etc. My favorite part is that, as a distraction, I've decided to start needle-felting plushies again - I got all my stuff together, shoved it in a drawer next to me, and haven't touched it since. Somehow I now have anxiety over my anxiety-distraction. 👏 Good job, me.

I'm also coming out of a really rough cold, so it's possible I'm just crabby & tired & overestimating my ability to function at a normal level at the moment. I was sick for what feels like weeks, but it really dragged on and doing small things was wearing me out greatly. I think my HP bar has just been sitting at a consistent red, just under the yellow.

I'm hoping that 2023 will break me free of these chronic illnesses that seem to keep happening. Even reading back in the last few posts I can see where I was sick time and again. Thankfully I'm not as bad as I was back in October where my tonsils swelled up and grew corn, 0/10 would not do again.

Sorry for the negatives, just sometimes it helps when I type it all out & stuffs 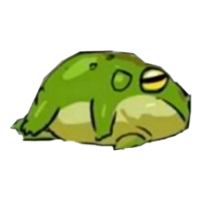