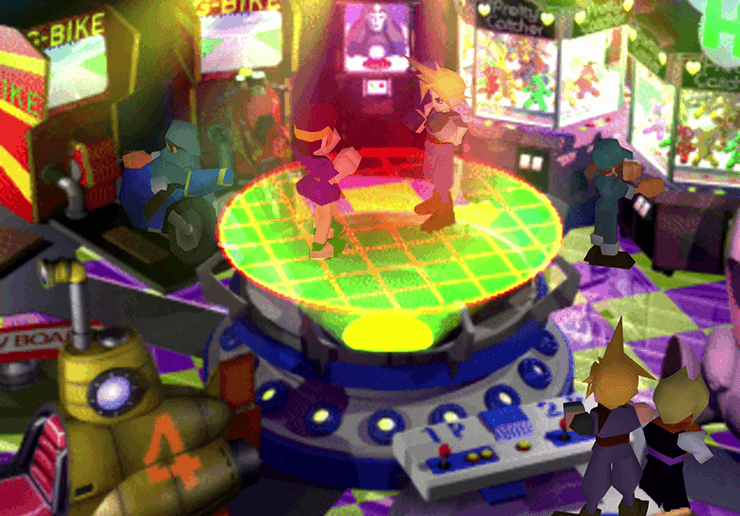 Fun Topic - I was curious to which Mini-game in Gold Saucer was everyone's favourite? Originally was I was going to remove Chocobo Racing & Battle Square from the poll. but I decided to put keep them in. I didn't include Crystal Fortune, as it isn't really a game.

This is truly difficult.

The entire Gold Saucer experience is an absolute wonder and is essentially Final Fantasy's Disneyland. When I first stumbled upon this place my mind was blown.

I love that you can replay edited versions of the motorbike, snowboard and submarine sections, but I'll not vote for them because they aren't unique to Gold Saucer.

Mog's House is a very cute game which I loved a lot. It was my first time encountering a moogle in my entire life as FFVII was my first game. I fell in love with the funny little winged rodents there and then.

To me it'll be between Chocobo Racing and Speed Square's roller-coaster. I love the target shooting aspect of the roller-coaster as it reminds me of some theme park rides (usually dark rides and not roller-coasters as ambitious as this one) such as the Buzz Lightyear rides at Disney parks.

However, I probably should vote for Chocobo Racing because it had by far the biggest influence on the franchise as a whole. Not only have other games attempted to recreate the feature (not as successfully, in my opinion - though perhaps FFXIV manages it) but it gave us the idea that complicated mini-games like this (which worked other systems into it, such as breeding and training) could be possible in a game like Final Fantasy.

I also appreciate the absolutely ridiculous tracks... This isn't normal chocobo racing: this is LSD-enhanced chocobo racing! There's a lot to see in them and a few neat Easter eggs, so that gets an up-vote from me.

The best mini-game for me is easily the Chocobo Racing. Racing your own caught and bred big birds around a crazy track to win items, or take a gamble and bet on a AI controlled race, was by far how I spent most of my time at the Gold Saucer. It was just awesome (and you get some great rewards from it)!

Oh wow! It's been so long since I played FFVII that I forgot how many there were!

The ones I remember playing the most was G-Bike and Chocobo Racing. But between the two of those, I think I would go for Chocobo Racing because I felt like you had more input in the game by raising and breeding chocobos for it. And even if you didn't have a chocobo ready for racing, you could still participate in the game by betting.

That being said, I did spent a lot of time at the Speed Square early on too, because I really wanted to get Aerith's Umbrella. Though I probably ended up more frustrated with that game because it took me a while to get the right number of points

I remember one play through I did where I got super into Torpedo Attack for some reason. If you asked me now I'd probably say it would be one of the last few I'd voluntarily play, but fun facts I guess?

I liked to alternate between G-Bike & Snowboarding for a tiny bit of fun. I feel like even after playing them for the story that they were fun just to do on the side if you didn't want to do anything in particular in the game. Of course, what everyone say about Chocobo racing is fun too. You were at least more involved with it and you could race your chocobos after all that hard wark. *ahem*

Ah, but Mog's House. Certainly not my most-played game, but a favorite nonetheless. If I ever saw just this at an arcade I'd 1000% play it.


Anyhoo, I chose Snowboarding because that's probably what I played the most out of all the games there, followed close behind by G-Bike. My personal favorite though... Ah, probably Mog's House. ¯\_(ツ)_/¯ It's just too cute, what can I say~

Holy crap Super Dunk gives me massive anxiety. I actually get so frustrated with that game.

I could go for hours in Battle Square, Snowboarding, and Chocobo racing (I love the last two when Tifa is like, Cloud, pls step aside) though. I think my favourite has to be Battle Square.