[V7] What are you currently listening to?

Decided to listen to some FFVII Remake music because I'm thinking about it all over again now that it is a year old. I love this track so much. I find it incredibly calming!

There are twenty years to go
The faithful and the low
Best of starts, the broken heart, the stone

Quite relaxing. I love Lisa Gerrard.

This popping up on my iPod reminds me of when I was twenty. I haven't listened to the goth band The Crüxshadows in a long while, but this might be my favourite from their Egyptian-themed album. For some reason I picture being in the hypostyle hall of Abu Simbel's temple facing out or exploring or something when I listen to it.

A little different I thought id watch and listen to all the songs u guys posted and wanted to make a rating on how I feel about them.
Music is taste intensive and everyone (thank god) has their own taste. Thanks for sharing your music with me.
Here are my ratings (with a few words for each) all the way from the start in order.

Listening to all these and writing this wall of text took me a lot more time than I thought.

Again guys these numbers are purely on my feelings, so we cannot argue over it xD

I hadn't heard many of these songs before, I'm a big music fanatic. worked in a record label store for a couple of years before everything went digital and these things became extinct.

I really enjoyed listening to all of them no matter the rating. just some more than others

P.s. the forum didn't let me copy from my notepad soi had the fix the layout the best i could!

Final Fantasy Fan YT I applaud you for listening to everything we've listened to and rating it. That's quite an achievement! And with this being version 7 of this thread, there are 6 other threads full if you ever get a spare day!

(I kid, that would kill you)

I'll bite for judging yours.

Fly by Monkey Majik – Never heard this before (or the band). I’ll give this a 7 because it built up nicely.

Simple and Clean by Utada Hikaru– This is a Kingdom Hearts classic! It isn’t the sort of music I’d usually listen to but it’ll get an 8 from me because of the way the nostalgia is making me feel tonight. It's hard to let it go...

Cruise Chaser Blassty – This gets a 8 from me for historical reasons! Young Nobuo is showing his early promise here. I hadn’t heard this before, so I thank you for sharing it!

The Skies Above by The Black Mages - "Mister GOOOO!!!!" I'm biased here because I love The Black Mages and the fact that they were all too busy to continue after the third album is one of the greatest tragedies of our age (although it did mean that they could continue working on soundtracks). I'll give it a 9.5! This is top tier Black Mages. I love the instrumental tracks too, but these rock opera reinterpretations are what I really wanted to see from the project.

Oh, I felt a challenge there, as I'm typing this I scoured the web looking for the other 6 versions. ill let you know I found all 6 and already working my way on V1. Ill open a new thread as this will be quite a list

Let's try and keep this thread on topic, though, guys!

Tune! Definitely only know about it thanks to my mom and her specific taste in music. Not the biggest Duran Duran fan, but I quite like the song.

Wow, I didn't know there is a scoring criterion from you here. I just followed my emotion from OST in some games I’ve played in my life to choose something that may fit both the video game and movie then post on this topic. I appreciate it when you score 7 and 8 for 2 on my list. One of them, Arrival remixed by Serria originates from the author Brook Line. This track is scored 10 in my topic: https://soundcloud.app.goo.gl/fimd8LG6d4mieh6R7
Another track of Brook Line which is Heritage is also appreciated in my topic.
Cyberpunk is not one of my favorites, but the track for this context, from my view, is suitable for some kind of model character in FF like FFVIII. That's why some art backgrounds are chosen behind it like:
Besides, there is a track from another reminding me of the OST “The castle” in FFVIII: Into The Pale Abyss - All Over [Free DL]

soundcloud.app.goo.gl
While listening to the track, I imagine an art background showing a group of women wear hoodies as the assassin and Rinoa stands among them. Everyone’s face is hidden by wearing a cap except her, their mouth is appeared clearly from the caps and looks like smiling. Rinoa is smiling, too, like this: 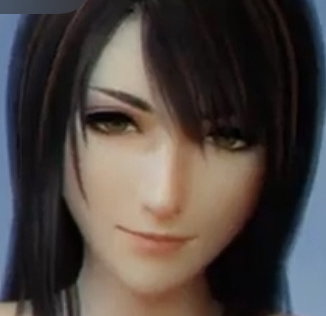 I notice that NOT all kind of hi-tech/cyberpunk is completely suitable for the FF game. Tracks are used following the experience and the emotion of this game. It's difficult to choose because the game primarily uses classical music so far though a guy told me that there is no hard rule to make the OST in-game. But from some reviews in the forum, I see that cyberpunk EDM music is possible to be accepted in the game. If not, you can enjoy the beat while looking at any FF character picture.
In FFVIII there is a scene I like: SeeD celebrates a musical show to support Squall and Rinoa's date. I imagine after the date has finished, the SeeD just talks to each other, "Romeo and Juliet have left, let's rock then”. A kind of this music is shown like this:
(no one in the team can sing but make a voice in the end-stage).
In another scene, this track, in my opinion, is like Ultimecia theme remix. It may be cool under a scene of the sorceress fights to SeeD under the rain. This will be a kind of fighting between hi-tech and magic weapons:
https://soundcloud.com/infraction-ivan%2Finfraction-virtual-reality-cyberpunk-no-copyright-music .
These tracks here contain sort music of rock, EDM, and disco in the 80-90’, back to the time when FFVIII was born.
I have an unforgettable memory of FF music. The first FF game I played with friends when we were in high school was FFVIII. I didn’t play well so let a friend finished the game while I just sat behind and listened to music. It’s hard to say but I had felt creepy when listening to the castle OST because this tone is used to play in funeral according to my experience. Next time my friend sent me a disc retaining the MV “Eyes on me”. Since then I fell in love with the FF game. In 2006, there was a fad for creating FFX GMV clip used songs of Linkin Park in our group. In which, the song “In the end” was used many times till this day. Not long after that, FF Advent Children was released and most of us enjoyed rock music in action scenes of this movie. But since FFXII, we almost stopped playing the FF game because we were all busy, and found out other RPG games that are more interesting such as The Elder Scroll, Diablo, and Assassin’s Creed. Some of us played FFXIII and FFXV due to the new graphics but felt disappointed with the story. We even don’t have time to watch the movie or reading the novel of the XV. Until now, my life is stressful so that I have to find something in my childhood memory to feel better. So I remember FF and its beautiful music. Again, I choose various music to put in the FF game like the way of creating the GMV clip many years ago. I don’t have skill at drawing or designing so I use music to try to describe any aspects of a game that may not be shown out yet.
Anyway, I hope there will be more ratings on any music here because it demonstrates we really care about them, and someday perhaps the music we like to listen can be used in the Final Fantasy game.

well, I thought I remembered most of the stuff from nier gestalt 10 years ago but apparently my brain decided to keep Emil's tragic story stored but skipped the scary part of the beginning when you first enter the manor lmao (it was like 2am too and I jumped multiple times)
anyway since this track plays throughout the manor it's bound to get stuck in your head and visits your dreams too.............. save me

Final Fantasy Fan YT said:
Dionysos - The Crüxshadows - Sympathy - Enjoyment Rating 6,5 (I like the sound of his voice, but couldn't get into the song)
Click to expand...

It is quite an atypical The Crüxshadows song. They aren't always like that, but I like it because it is different and I love the violin and the backing rhythm.

Rogue (lead singer) is known for his nasally, moody voice. I actually saw him live once and met him. A friend was really huge about them so I went, and I was surprised to see the lead singer actually sing from within the audience itself, right next to me, hand on my shoulder at one point, rather than strictly being confined to the stage. That was a strange experience, but I haven't been to many gigs.

If you like the voice, but not the track, this one has more of a punch to its beat:

To be on topic though, I have just relistened to this for the purposes of this post, as I also technically listened to the tracks I commented on above!
So don't bite me, Kira!
W Stop and smell the roses 22 y.e

I love Kokia's voice so much

I remember finding some of her songs where she covered some celtic songs, and then years later I saw her name again in the FFXIII-2 OST, she sang Noel's theme song