The Blueness of a Wound: Launch interview with Roko Zaper 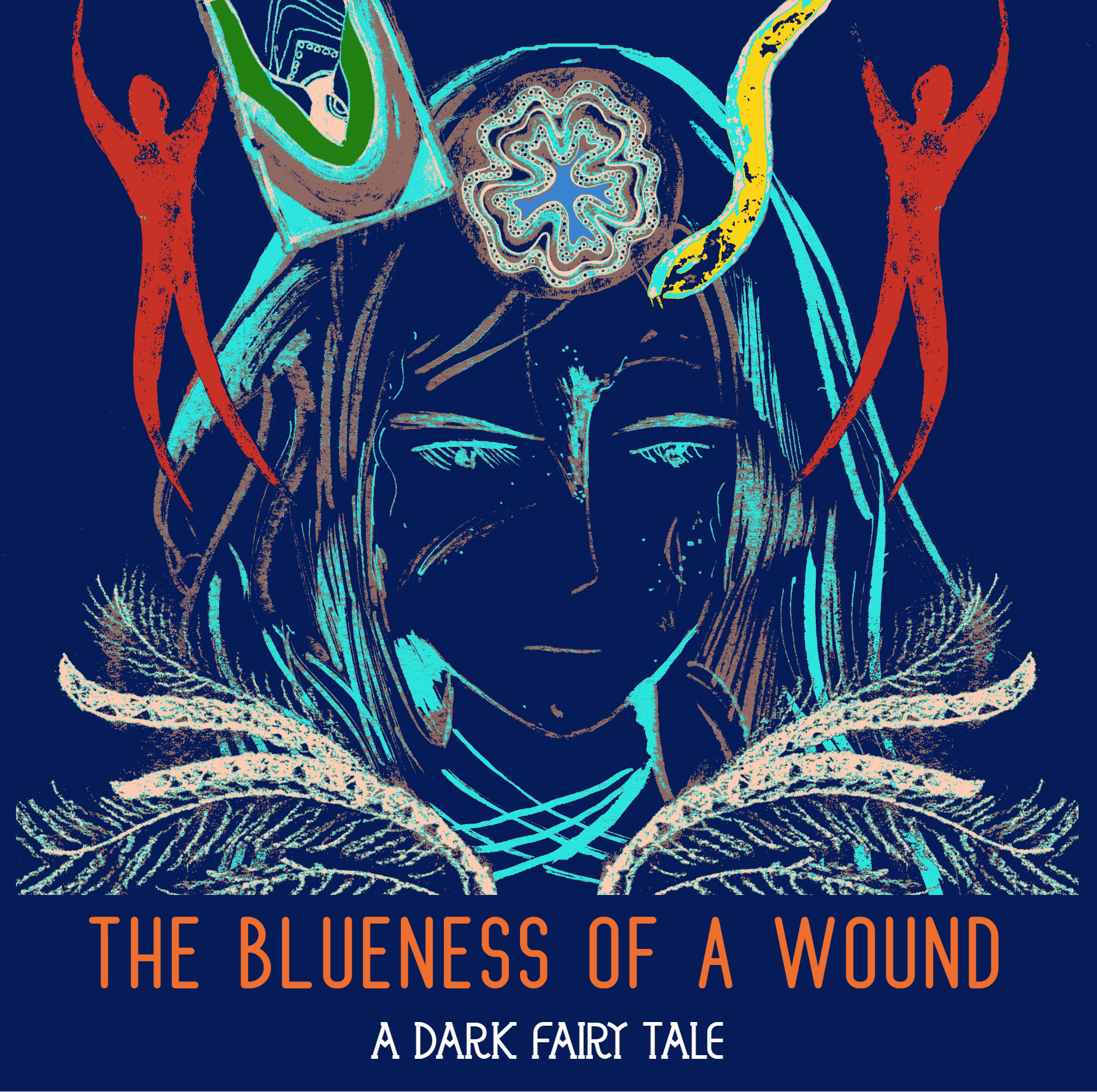 ​
Today Zaperart has successfully launched The Blueness of a Wound on Steam, a point & click adventure game set in the Blue Mountains in New South Wales, Australia. From the creator of the graphic novel Lost Dreams of the Unicorn (Roko Zaper - also known as redcloud9 here on Final Fantasy Forums) and featuring music from the incredible Hiroki Kikuta (Secret of Mana, Koudelka), this new saga sees Roko's unique artistic talents suited to a new medium. Combining a real setting with mythological elements, if you fancy a dive into the uncanny realm of Dreamtime, this is the experience for you!

To celebrate The Blueness of a Wound's launch I asked Roko a series of questions about the game.
His responses were enlightening.
​
How would you summarise the premise of the game?
It's an adventure/mystery where the main character, Lana Melka, goes searching for her younger sister. You are not really sure what happened but you are compelled to return to the place where she disappeared and where you both grew up, the Blue Mountains region of Australia. What follows is a journey deep into the forested valleys of the mountains, where everything is not as it seems.

How did you arrive at the title of the game ‘The Blueness of a Wound’?
There can actually be many interpretations of the title. Initially, I was referring to a quote from the bible about physical pain. I was thinking more about spiritual wounds and how we deal with those. We all have them but how do they measure up? The Blueness is also a reference to the Blue Mountains themselves which are said to take on an especially blue hue due to the oil rich atmosphere created by the trees in the area. Again, it is this notion of different levels and our interpretations. How blue something is and how severe is one injustice compared to another? The story and the characters struggle with these questions. Aesthetically, I also wanted to experiment with the color blue and see how many different emotions and scenarios it could bring about.

What sort of gameplay experience does Blueness of a Wound offer?
It started out as a traditional point and click adventure with character choices such as those found in visual novels. However, I wanted the stakes to be very high and for players to approach choices using intuition and their own knowledge. In a lot of ways I wanted to return to the beginnings of game design and even before then, where adventure books often gave you choices where to take the story. I remember being so engrossed in these books and a lot of gaming choices these days do not have the same impact. They always seem to nudge the player in one direction and the choice is drowned out by so many other factors, a myriad of gaming systems, bombastic music and the knowledge that nothing can really go wrong. I wanted to strip away those things and create an experience where everything is fresh again, minimalistic and requires concentration and investment. 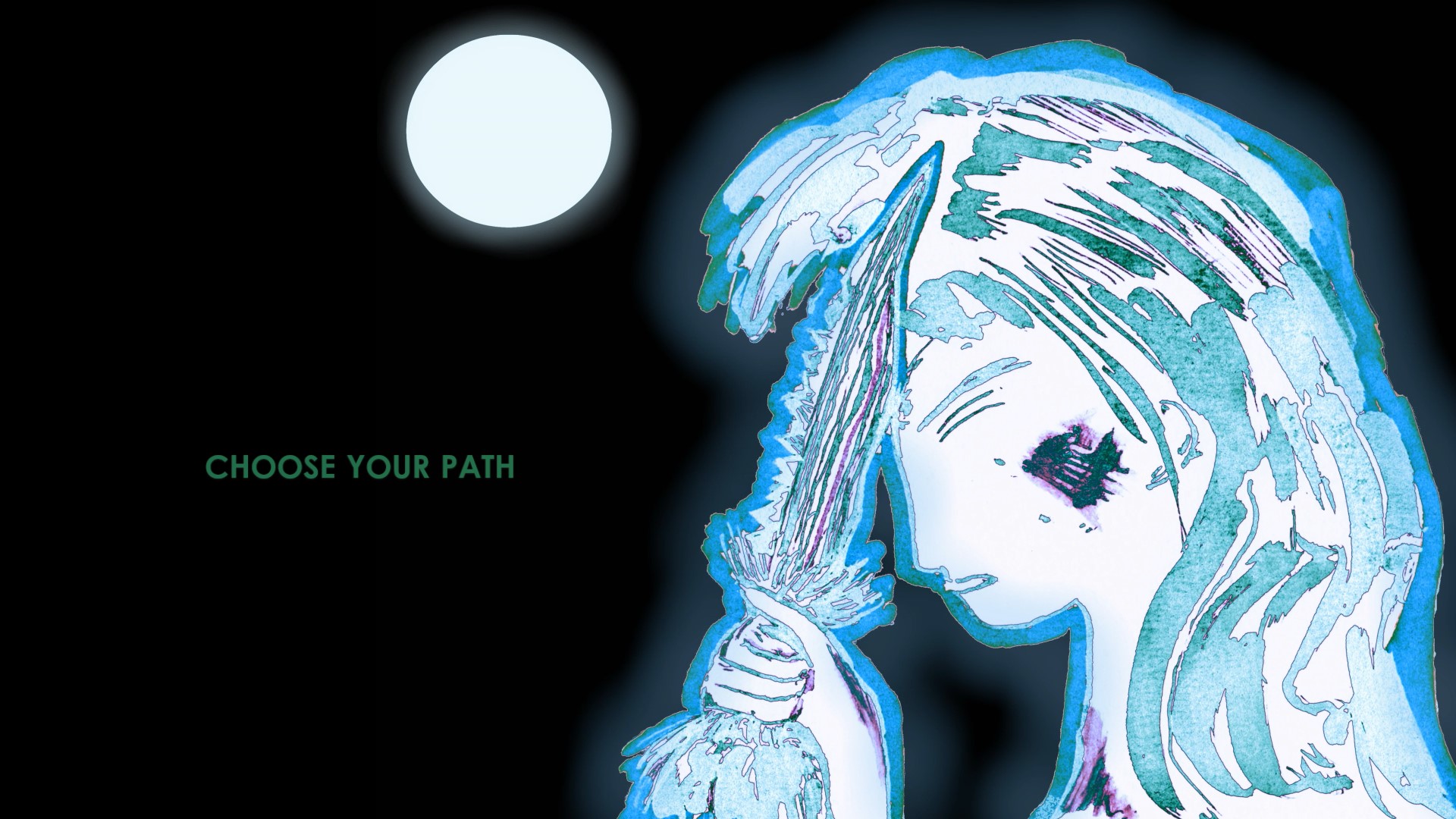 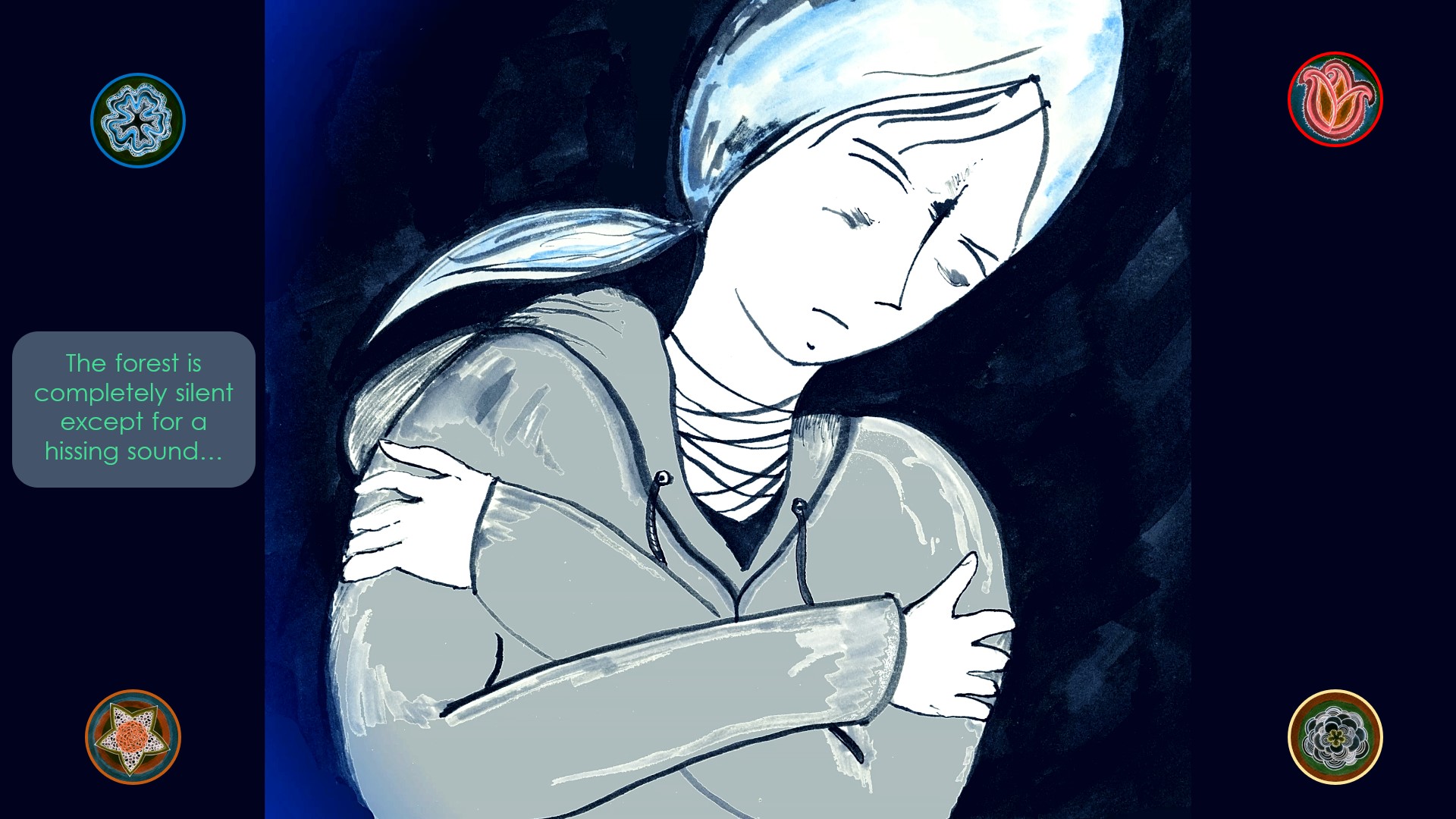 The Blueness of a Wound invites the player to make their own decisions carefully
based on the knowledge they gather in the game. ​

How would you describe your artistic style?
My artistic style probably draws on numerous influences including storybooks, comics, anime, concept art, Japanese sumi-e art, Indigenous art forms and pop art. Unlike in a lot of games, the art style really takes centre stage here as it was one of the main reasons development started. As an artist and a gamer I have constantly been inspired by the amazing concept art we see developed behind the scenes for games. I remember thinking one day, I want to play a game where the concept art doesn't become the base for the 3D models we are so used to. One example I remember is someone asking in a forum: "Can we have a game where we play as Yoshitaka Amano's characters?" Something clicked. There are a few small homages to the concept art of past games here that some players will pick up on. 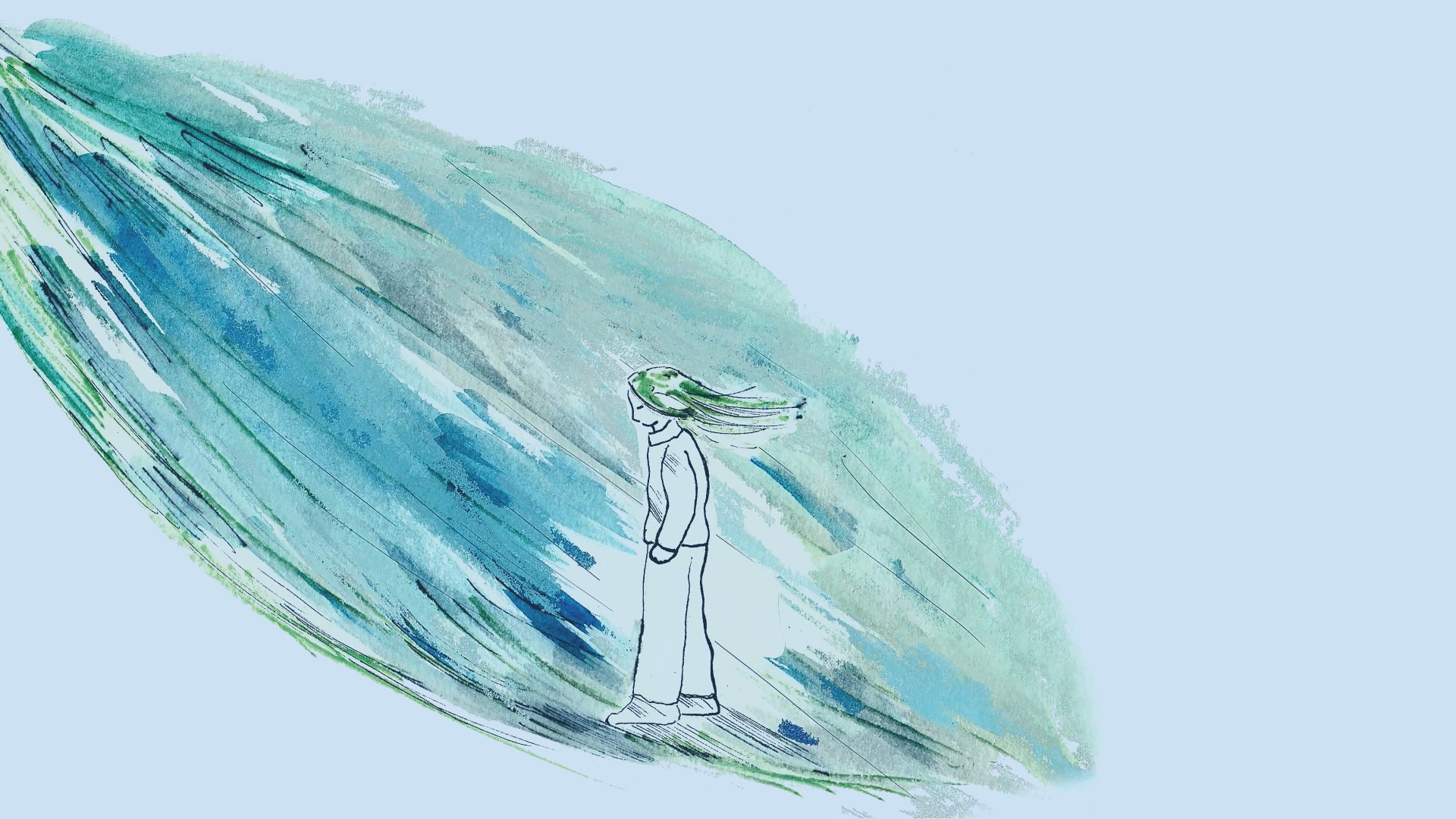 Unlike many games where artwork of this quality are mostly concept pieces,
Roko's watercolour illustrations are built into the very fabric of his game.
​
I recall that the project which eventually became Lost Dreams of the Unicorn started out as a 2D RPG Maker game until you decided to bring it to life through your artwork as a graphic novel. How does it feel to now be doing almost the opposite for The Blueness of a Wound by using your own artwork to create a game?
Wow, that's an interesting perspective on my process! I think I probably always wanted to tell stories and games became one of the ways my generation got to experience them. I've also always wanted to make a game but I knew I would not have the resources to make many of those ideas a reality. With this project I thought, this is it, I think I can do it and in a way that is manageable. Not to say it hasn't been bloody hard but the ability to make independent games gives us endless freedom to try new things. It is one of the things that is certainly missing in the world of AAA titles. Ultimately, I am glad people are able to experience my art in a new way. 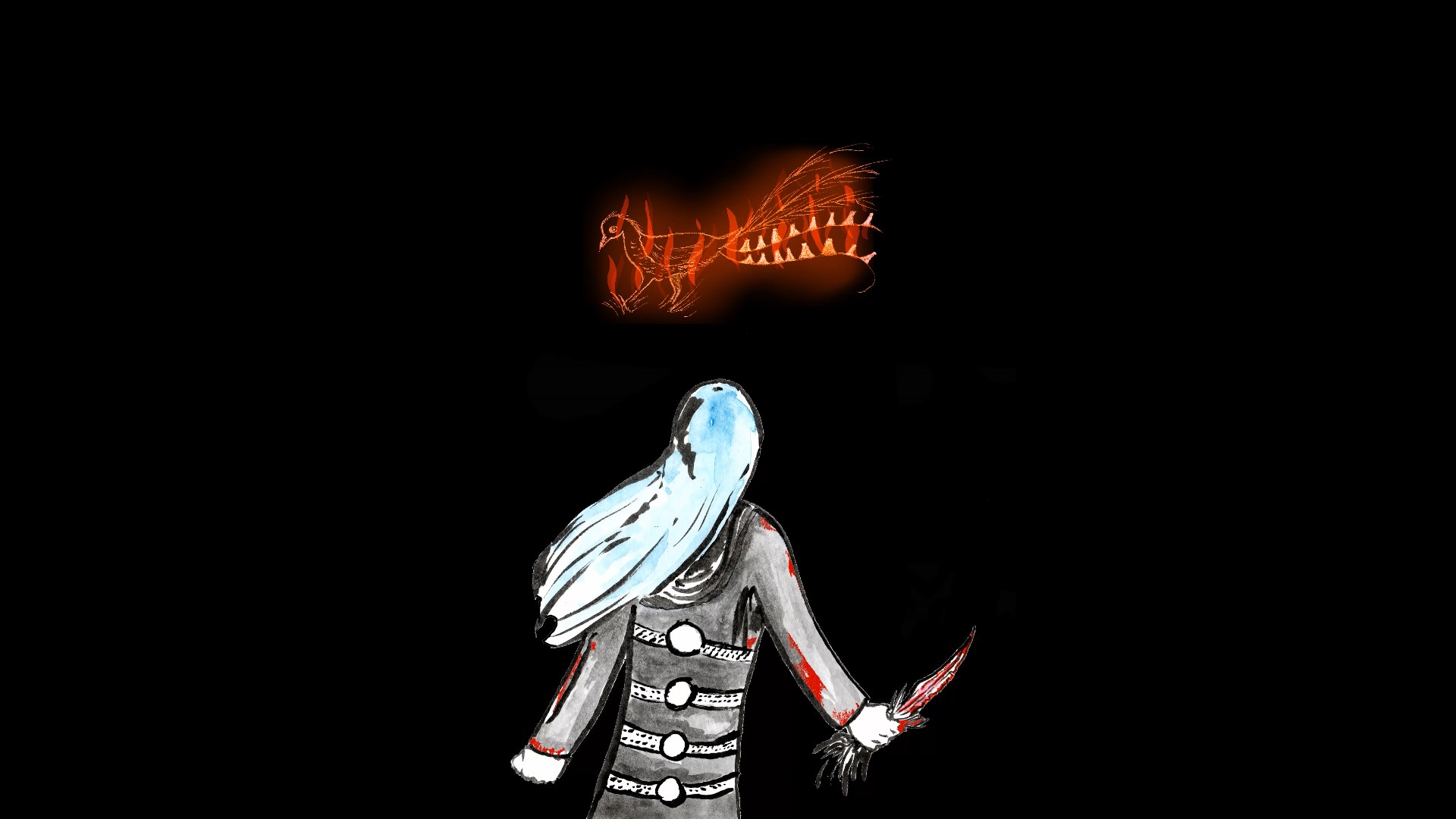 The fantastical, dreamlike quality of Roko's art style is used with dynamic effect. ​
I’ve noticed a mixture of mythological references in the game’s demo and site descriptions, from Aboriginal to Slavic folklore. Can you explain what role mythology plays in The Blueness of a Wound? Do you consider it important?
Mythology plays a central role in the game. Even the side characters often reference mythological stories. What I wanted to do using various mythological stories is show our shared experience of the spiritual world, which has been neglected or seems completely absent from most of our everyday lives. What we see in games like Final Fantasy is often a callback to that kind of worldview. A summon like Shiva is ultra powerful and characters are using forces of nature such as ice, fire, etc. There is something powerful about that which connects us to nature and cultural traditions which have existed for a very long time.

Tell us about your game’s intriguing Divination system. How crucial is it to the game’s world?
I was looking for a way to represent magic and intuition and rather than inventing a system, I decided to use a system of tarot cards which are well known around the world. They are crucial to progress in the game. Although, there is a hint option so people don't have to be familiar with the cards themselves. I think it is exciting to be presented with something you don't know or that is not fully explained. Usually it is a case of fire versus ice in games, but here you need to examine things more deeply in order to choose the right element or card. 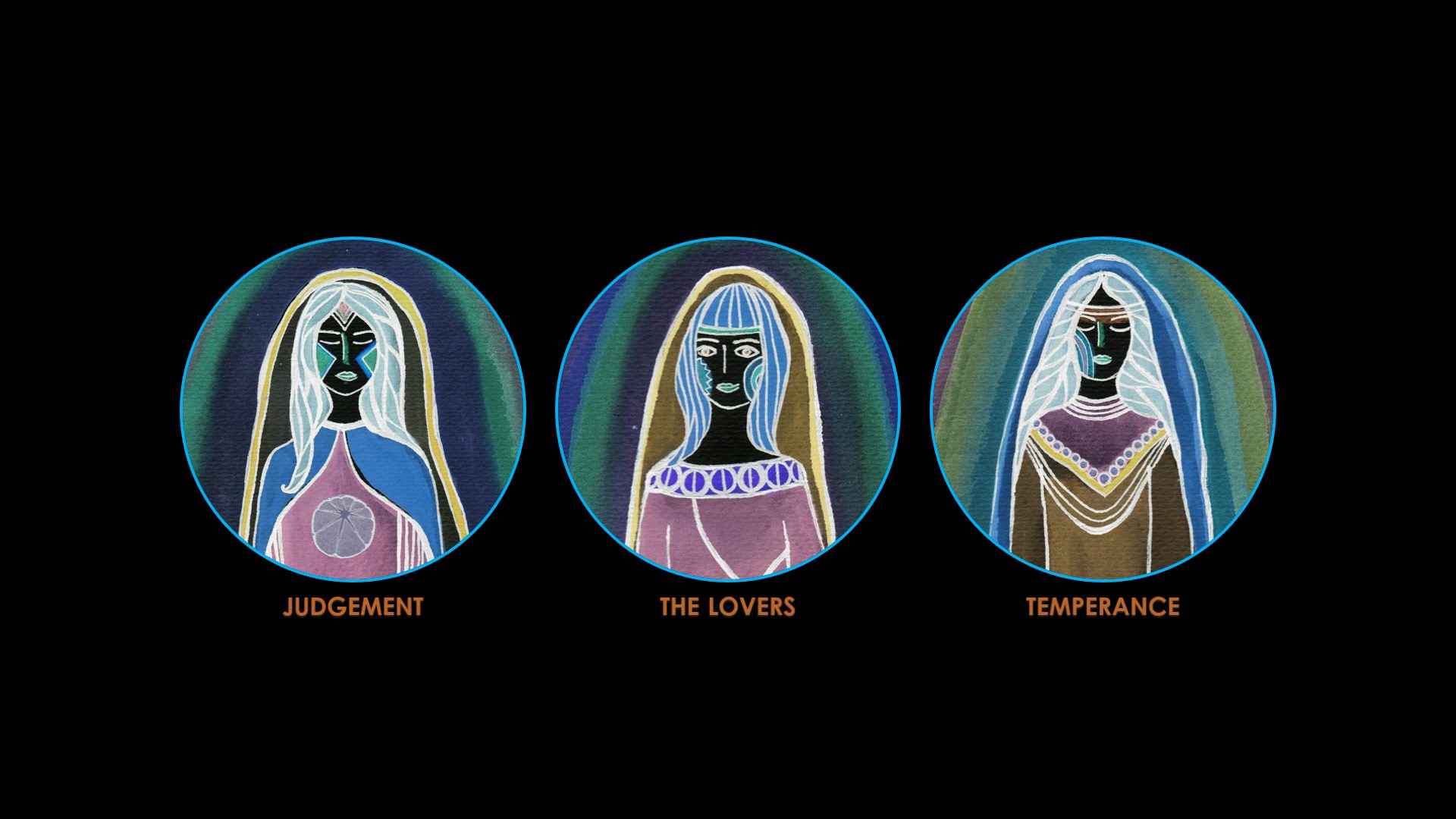 The tarot-based Divination system functions as the game's magic system. ​
What has it been like having video game music legend Hiroki Kikuta compose music for your game?!
That part has been a dream come true. As a child I used to spend countless hours recording Secret of Mana's music on cassette tapes. It's really how my passion for music and games started. I think Mr. Kikuta's music best symbolizes the atmosphere of the game, which is both frightening and wonderous. His own game, Koudelka, was also quite an inspiration.

It was horrifying learning about the tragedy of the recent Australian bushfires (2019-2020). The primary location of your game, the Blue Mountains, were affected a lot. Has this made you think about your project any differently?
It has definitely been one of the things weighing on my mind in a year that has been full of tragedy and reflection. It was all so sudden, one moment you're trying to capture the beauty of the Blue Mountains and the other most of it is gone. I did not fundamentally change my project but I think its message rings even more true; how the magic of the natural world ties into our lives. Also, we are physically affected by everything that happens to nature. It was hard to breathe here for endless weeks due to the smoke. Ultimately, nature will rejuvenate but we will be much poorer without that connection in the first place. 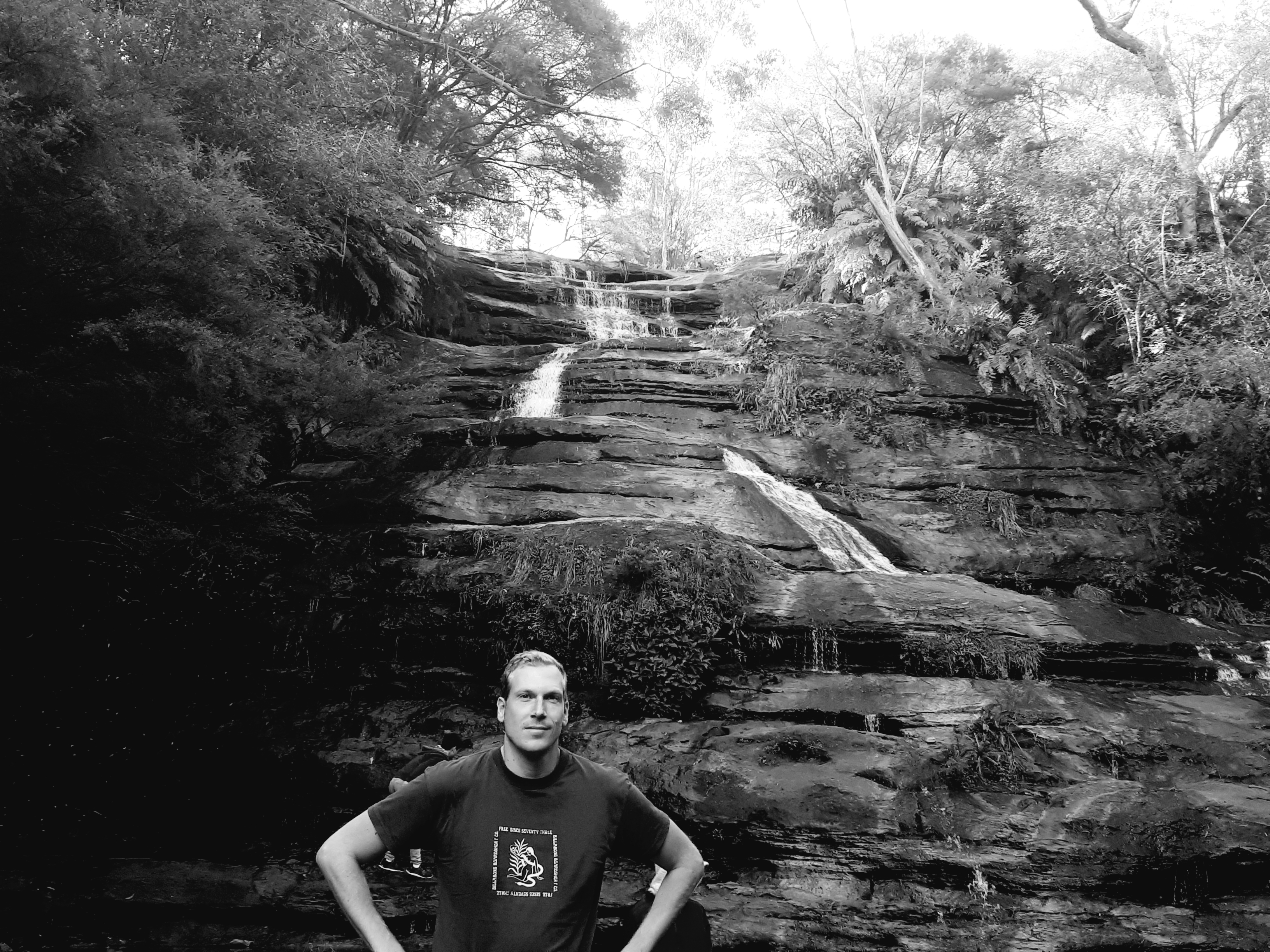 Is there anything in particular that you think might attract Final Fantasy fans to this game?
It may sound strange but I believe that the game structure has a lot of Final Fantasy DNA in it, albeit one with a darker and more contemporary tone. All Final Fantasy heroes must dig deep to find their inner strength and doing so changes the way they perceive the world around them. I think the main character of the game, Lana, fits into that mould. She has an inner power and intuition she has neglected and the events force her to rediscover it. I think the story as a whole is a kind of compromise between the pure fantasy Final Fantasy represents and the real world. I wanted to try to merge the two in order to show how powerful and relevant messages we often see in fiction are.

Think about it this way: say Terra of Final Fantasy VI exists in our world, she wakes up with no memories of her past, living a life that's slowly draining her spirit and magic. But something happens and she begins to awaken. However, it's much harder to do that in our world. There's usually no motley crew of allies or airships to take her away. That is the gist of what I am trying to accomplish. I hope we can take away from it the fact that both fiction and reality are more connected and magical than it may appear. 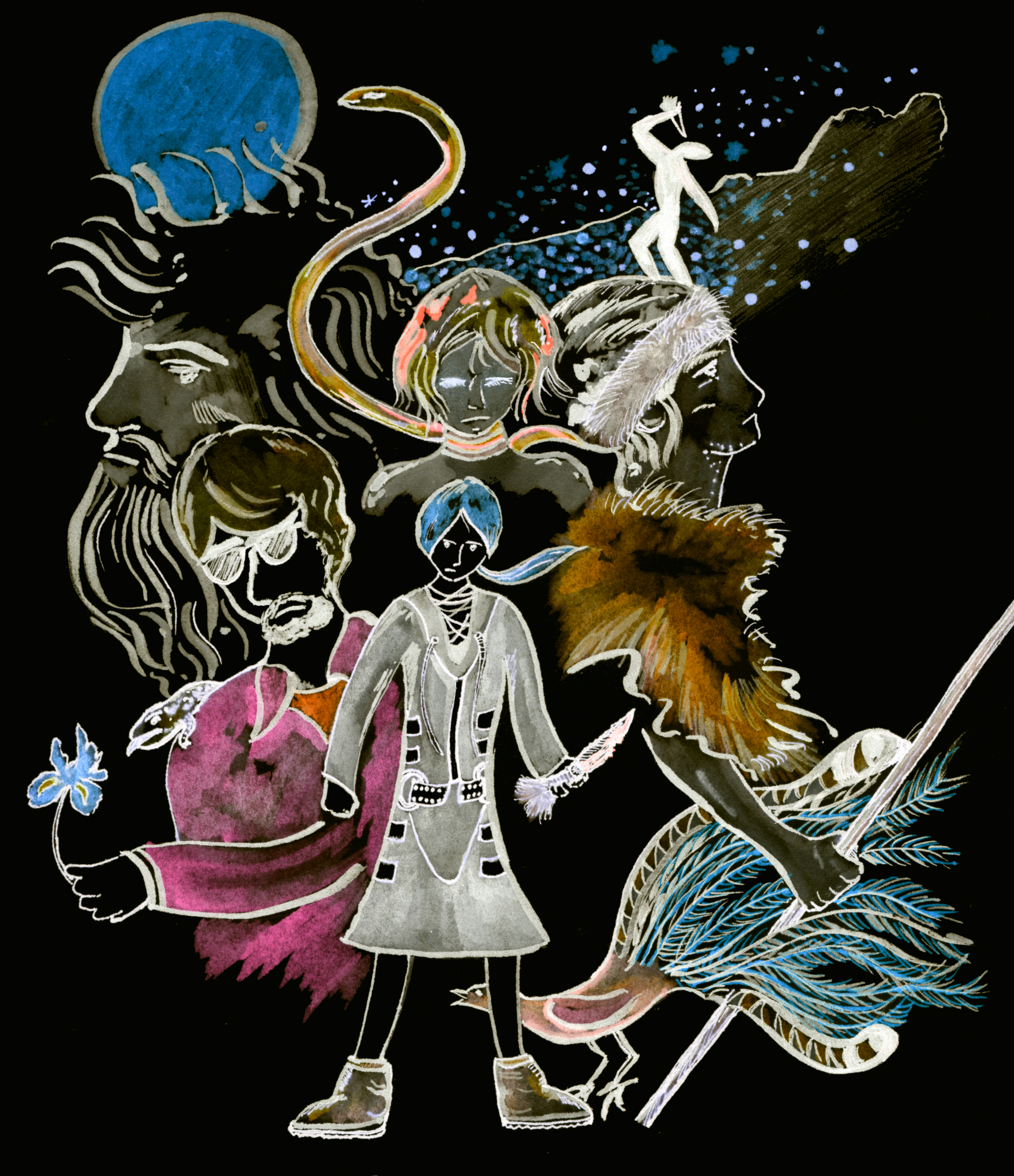 We congratulate Roko on the launch!

​
If you wish to learn more about the game see:
www.zaperart.com/blue
https://www.facebook.com/zaperart/

The Blueness of a Wound - Interactive Graphic Novel

Hi guys, Apart from the graphic novel I have been working on, The Lost Dreams of the Unicorn, I have also been hard at work creating a horror/mystery with some interactive elements (like clicking on items, making choices etc.) Think of it as a simplified adventure game. It was inspired by lots...
www.finalfantasyforums.net


You can purchase the game on Steam here: The Blueness of a Wound on Steam

Experience a dark fairy tale set in the Blue Mountains of Australia. Lana is a young woman who is haunted by the loss of her sister and must venture deep into the primordial valleys of the mountains to seek the truth.