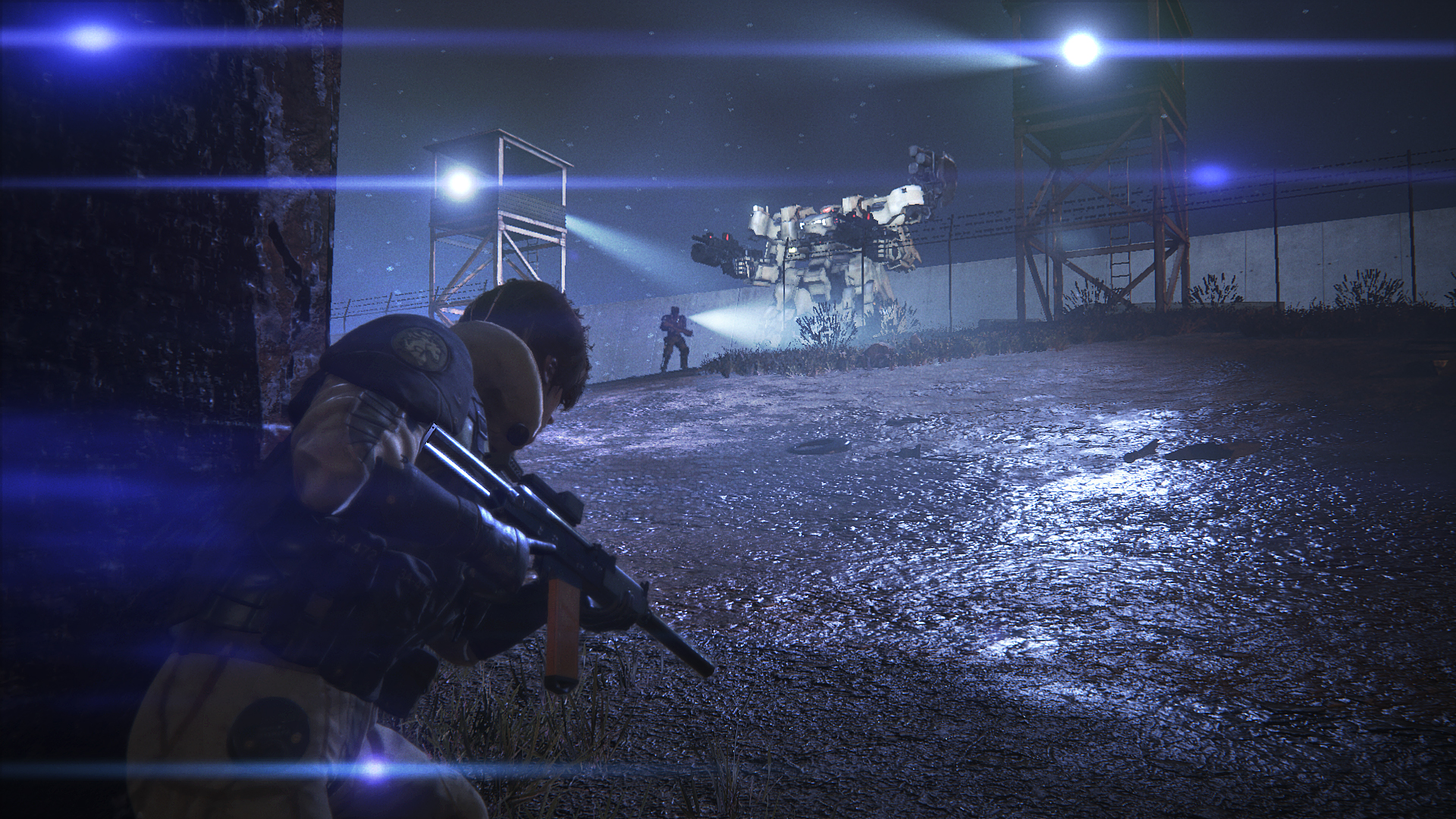 For those of you unaware, Left Alive is a survival action shooter worked on by veteran leads such as Toshifumi Nabeshima (of Armored Core fame); Takayuki Yanase, who designed many mechs over the years, such as the ones in Mobile Suit Gundam 00 and Ghost in the Shell: Arise; and Yoji Shinkawa, whose distinctive artwork is recognised by many a fan of the Metal Gear Solid games. It serves as a spiritual successor to the Front Mission games, exchanging tactical RPG gameplay for a tactical shooter affair.

The game is due for release sometime in 2019 for PS4 and PC, though will first release in Japan on 28 February.

Left Alive is a third-person shooter that will play out in stages/levels with three playable protagonists. Unlike most shooters on the market where you can simply charge through enemy ranks guns blazing while paying little heed for strategic thinking, Left Alive is a game that will strongly urge you to approach each scenario with a tactical head in order to...well, stay alive, essentially. On foot there will be scarce resources to scavenge and you will most likely have to craft and improvise as you engage in guerrilla warfare against the imposing Wanzers - mechs from the Front Mission games. We're talking improvised traps, lures and weapons against an overwhelming enemy force that vastly outstrips you in numbers and resources. Your vulnerability will mean there will be an element of survival horror embedded into this game's DNA.

As this will still be a narrative story game, the producers have pointed out the element of choice available on the player to influence the world around them and the ending they will receive when they emerge - presumably - alive. Your enemies will discuss whether to kill captured civilians and other prisoners of war and you can make the choice to divert from your critical task to intervene. Every citizen you save from a grisly point blank execution will appear in some capacity at the end of the game, meaning as you play you will also have to wrestle with morals and ethics as well as plain and simple pragmatic survival. To top it all off, these will be civilians with their own backstories and character, ensuring you'll be rescuing more than just nameless NPCs whom you'll ordinarily never have to see or think about ever again.

Director Toshifumi Nabeshima described the following: “There are puzzle elements as well as trap action elements, depending on how you use the materials you possess to make items. Based on the structure of the map, you can avoid most enemies, and depending on the weapons and items in your possession, you can play more like a shooter or make use of trap actions. Having a great degree of freedom and highly strategic play was one element that we wanted to implement in this game.”

“The player will be forced to make various choices in the story and as they play the game. One of the major concepts of this game is to make the player find a solution, take action, and move forward through trial and error.”

Take a look at the latest trailer for the game, as part of the Tokyo Game Show uhh, pre-show.