Hello everyone, I am writing to you because I am looking forward to final fantasy and I need to buy chapter 15, I ask those who are more experienced than me who changes between the day one edition and the royal edition, if it is worth buying it! And if anyone has played it, if he recommends final fantasy 14, I played 7! And the remake! And I want to play these other 2 but I don't understand the differences between royal and standard and not even 14 if it deserves help or not!And if someone can help me understand the differences between the various versions also in the remake chapter 7, I think I have the complete game but I don't know if there are any dlc, help me I'm not understanding anything
Last edited: Apr 6, 2021

Here's a chart that shows the difference between the FFXV royal pack DLC and the Royal Edition, either way the Day One edition only comes with one weapon DLC I think? the royal edition comes with all the DLCs and expansions 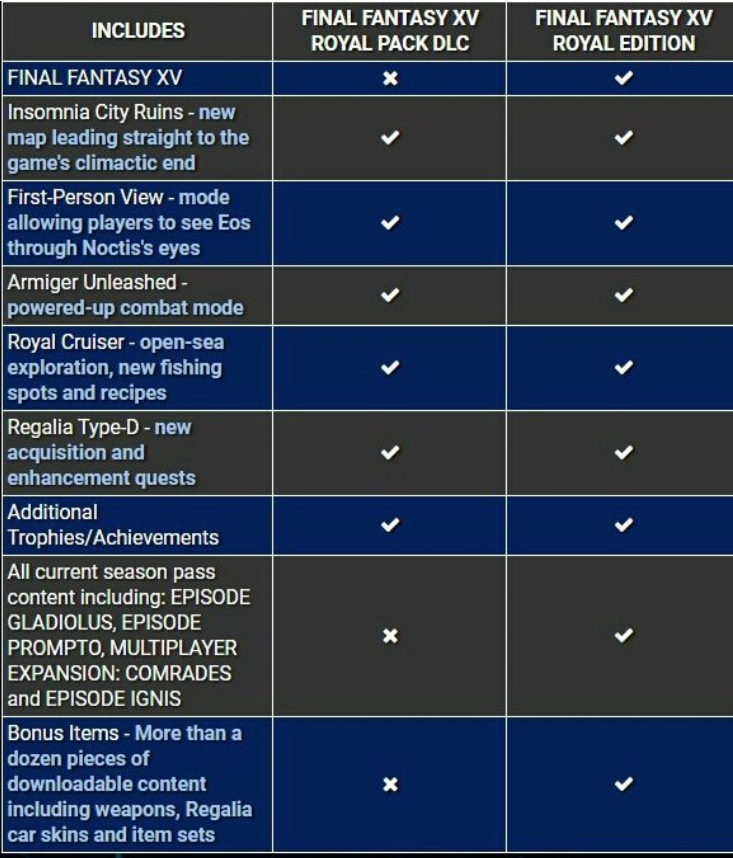 As for FF14, don't know if you know this but it's an online multiplayer game! (I myself enjoy it a lot but just wanted to clarify that!)

As shivas says, the Day One edition of FFXV is pretty much the bare bones of the game with a minor cosmetic item. While there are some patch updates which make the game play differently (and better) which should be active with free downloads (which will download automatically with an internet connection), the story content will be the bare minimum.

Although it'll be more costly, the Royal Edition would be the ideal experience for FFXV. For some reason FFXV doesn't effectively communicate all of the nuances of the plot in the base game, so you need to play the DLC episodes and, ideally, watch the film Kingsglaive in order to have a complete picture. There are also additions specific to the Royal Edition.

FFXIV is a great game. Truly some of the best storytelling in the entire franchise once you get deep enough into it. It does, however, require a monthly subscription as it is a an online game. It also takes a lot longer to play as a result.

FFVII Remake is currently complete on its own (well, it is part one of a larger project, but it also acts as a standalone title without DLC). The differences in the editions were mostly more cosmetic items and additional summons being available for the more expensive packages. There will, however, be a DLC pack starring Yuffie launching later in the year. It is set to only be available for the PS5 version though.
You must log in or register to reply here.
Share:
Facebook Twitter Reddit Pinterest Tumblr WhatsApp Email Share Link
Top