​
What a twist! Yoshi-P strung us along, instilling in everyone the belief that Stormblood, FFXIV's second expansion, will solely take place in the region surrounding imperial-controlled Ala Mhigo. With the Frankfurt Fanfest keynote wrapped up, it would appear that the bulk of the expansion will instead take place in the Far East, far away from Eorzea and in the land of Othard. If we're going to try and liberate Ala Mhigo, we may as well try our hand at liberating Doma from the very same oppressors too? With its Edo-era architecture and sprawling landscapes inspired by oriental lands from centuries ago, it is more than apt given the very distinct Far East theme that the second new job revealed for Stormblood to accompany Red Mage will beSamurai. 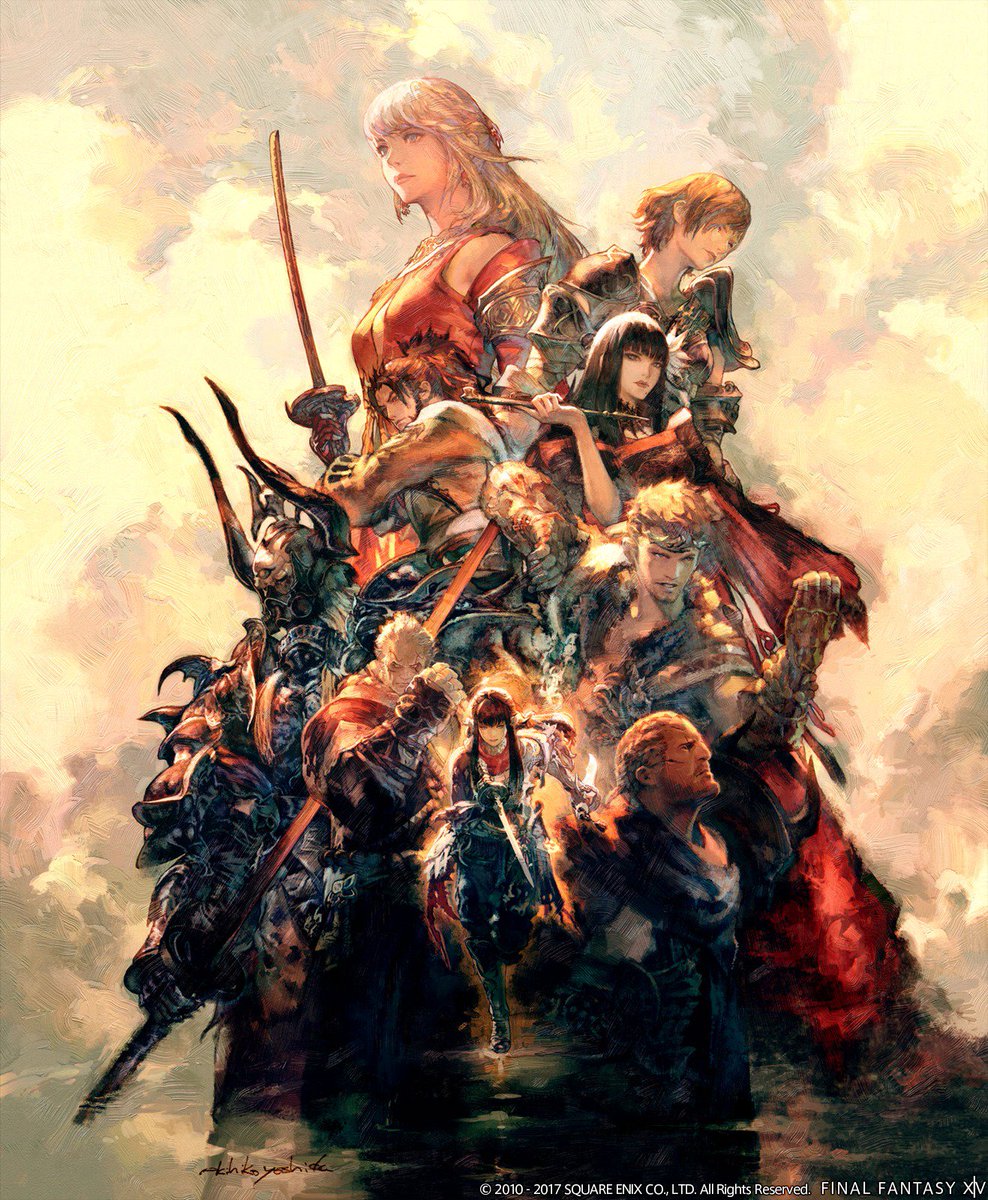 Check out the official trailer below, which is an extension of the teaser from the Las Vegas Fanfest in October:


The Warrior of Light and the as-yet unnamed Crimson Liberator square off on the statue of Rhalgr in the mountainous terrain near Ala Mhigo on the Eorzean frontiers while halfway across the world past the ominous shrouded land of Ilsabard that is entirely under Garlemald's control, is Othard. Notice Doma on the map, which lore fans will recognise as the home nation of the character Yugiri, which had been razed to the ground by Garlean oppressors in brutal retaliation for a failed uprising. Across the strait is the port city ofKugane. Much like Japan, this island chain of Hingashi is not the most welcoming of hosts for foreigners, with the city acting as a special economic zone of sorts, where outsiders can dock and trade. Beyond Kugane, The Ruby Sea is host to myriads of pirate vessels, with the sprawling terrains of YanxiaandThe Azim Steppes on the Othard mainland itself. 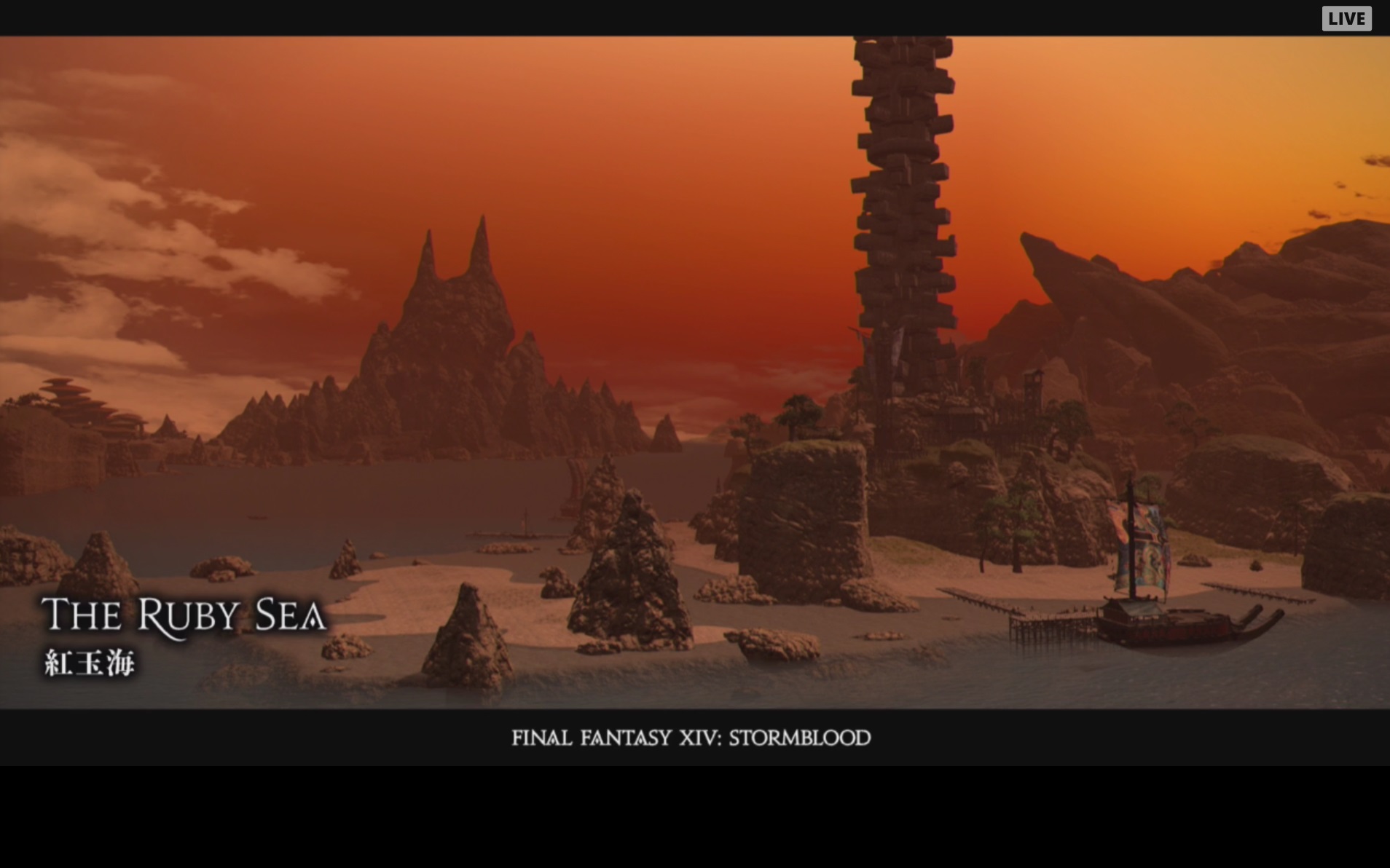 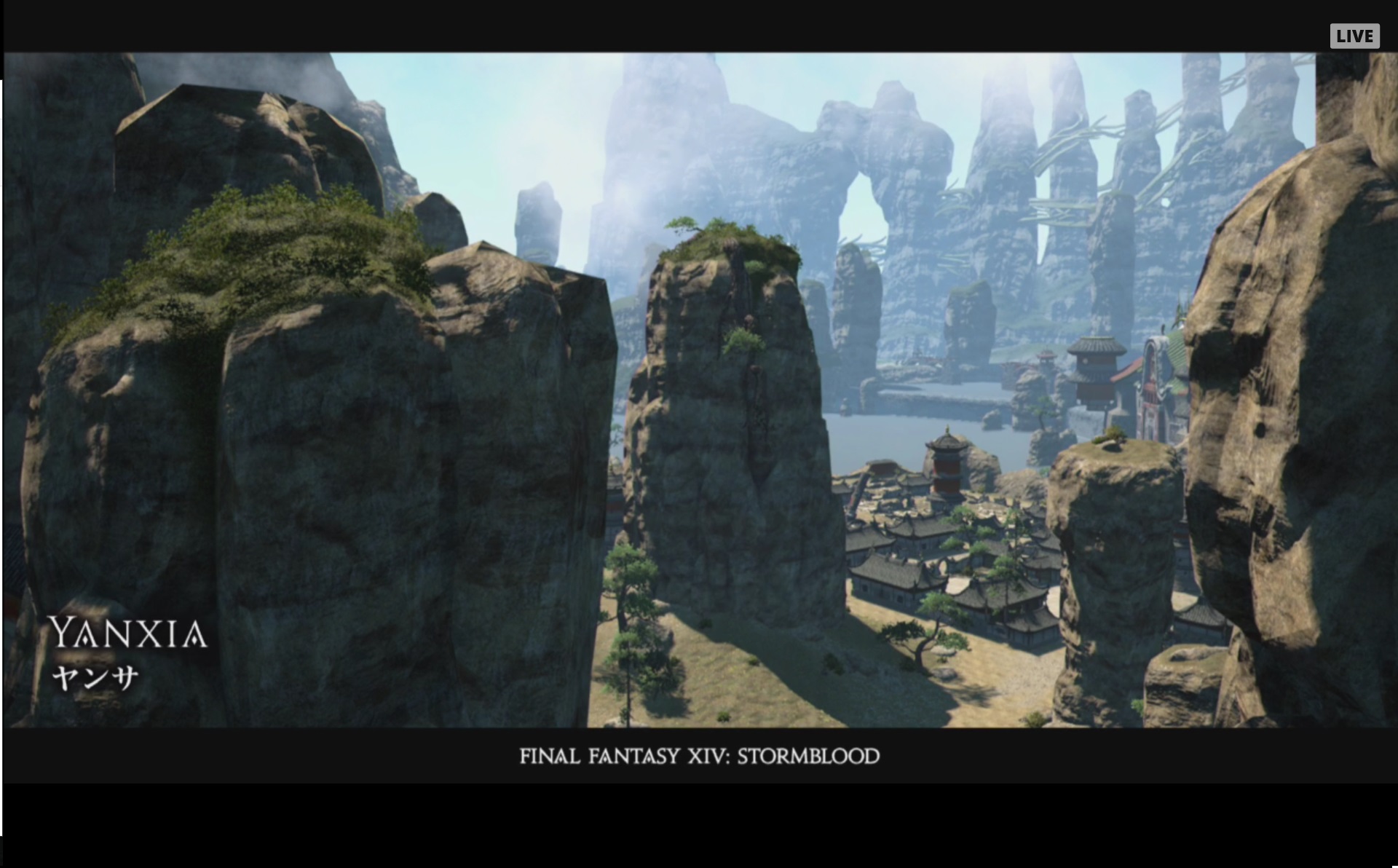 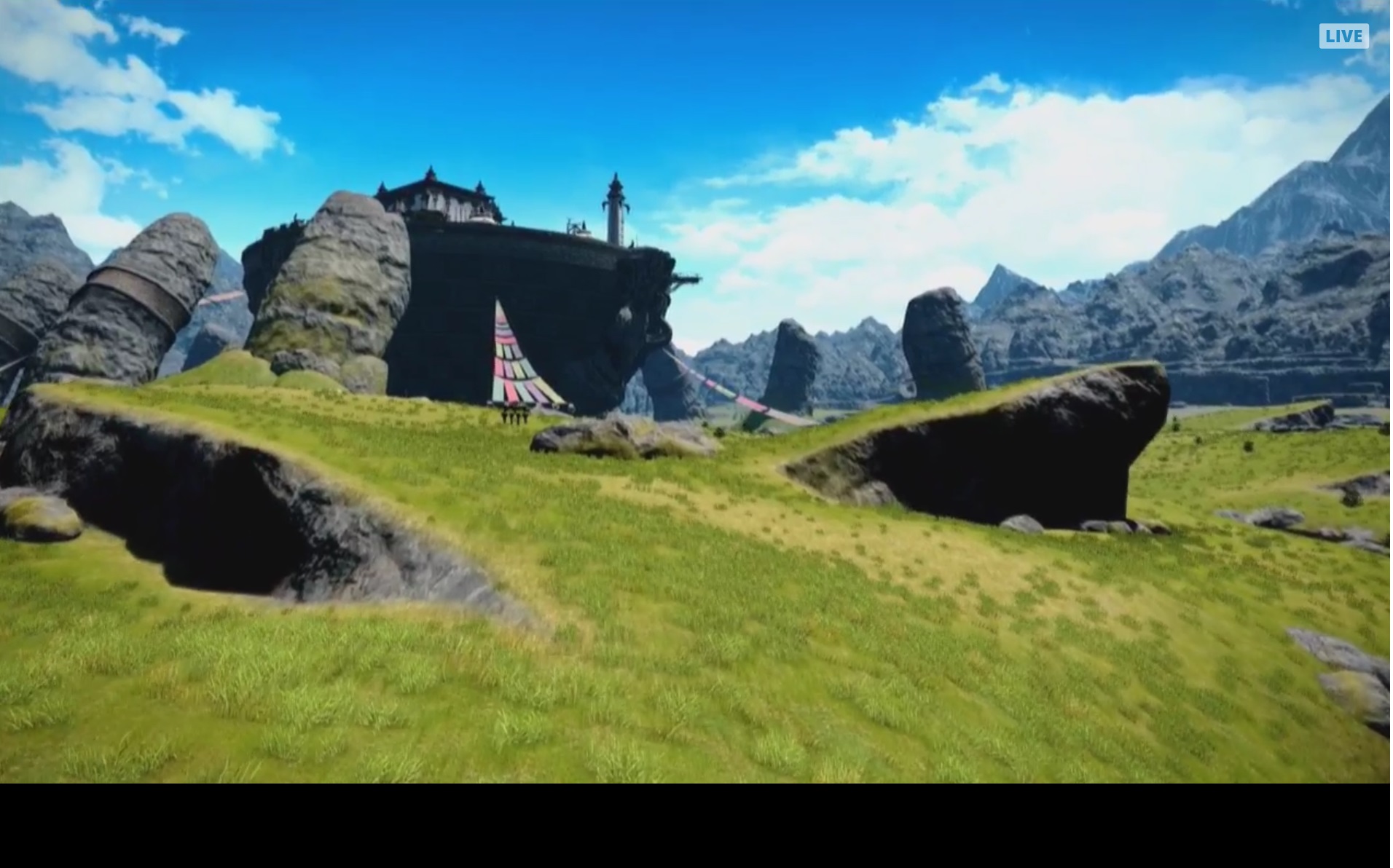 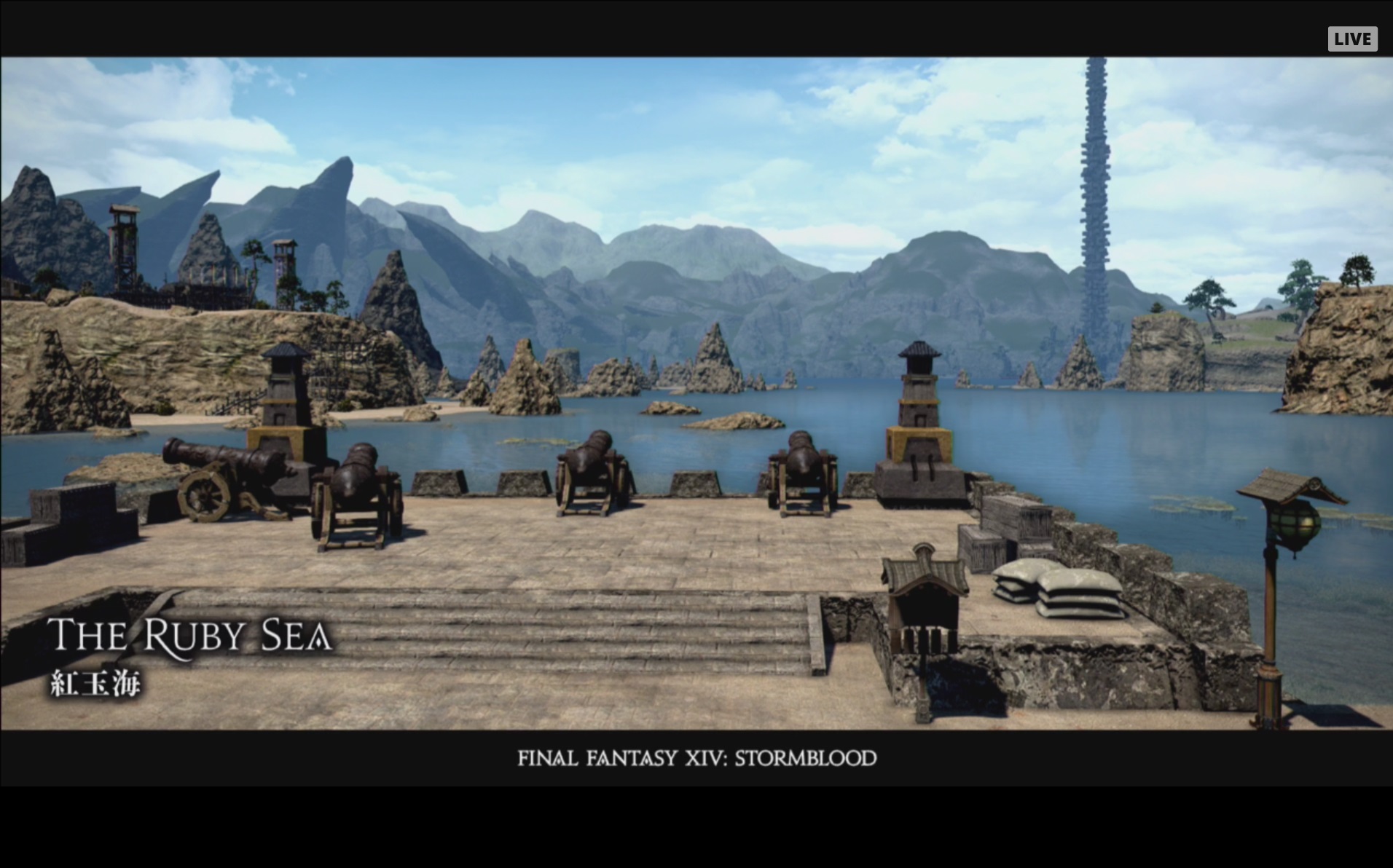 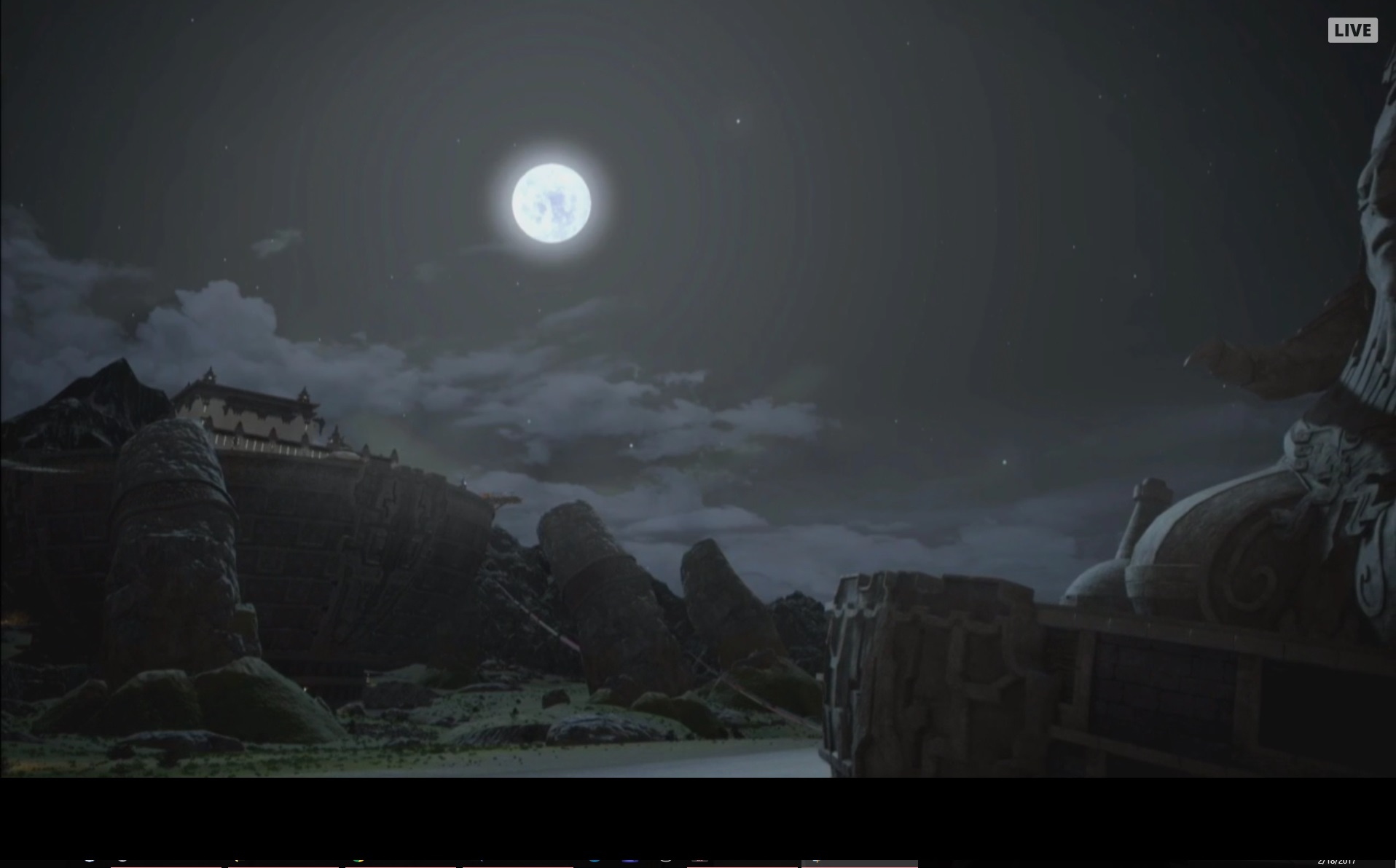 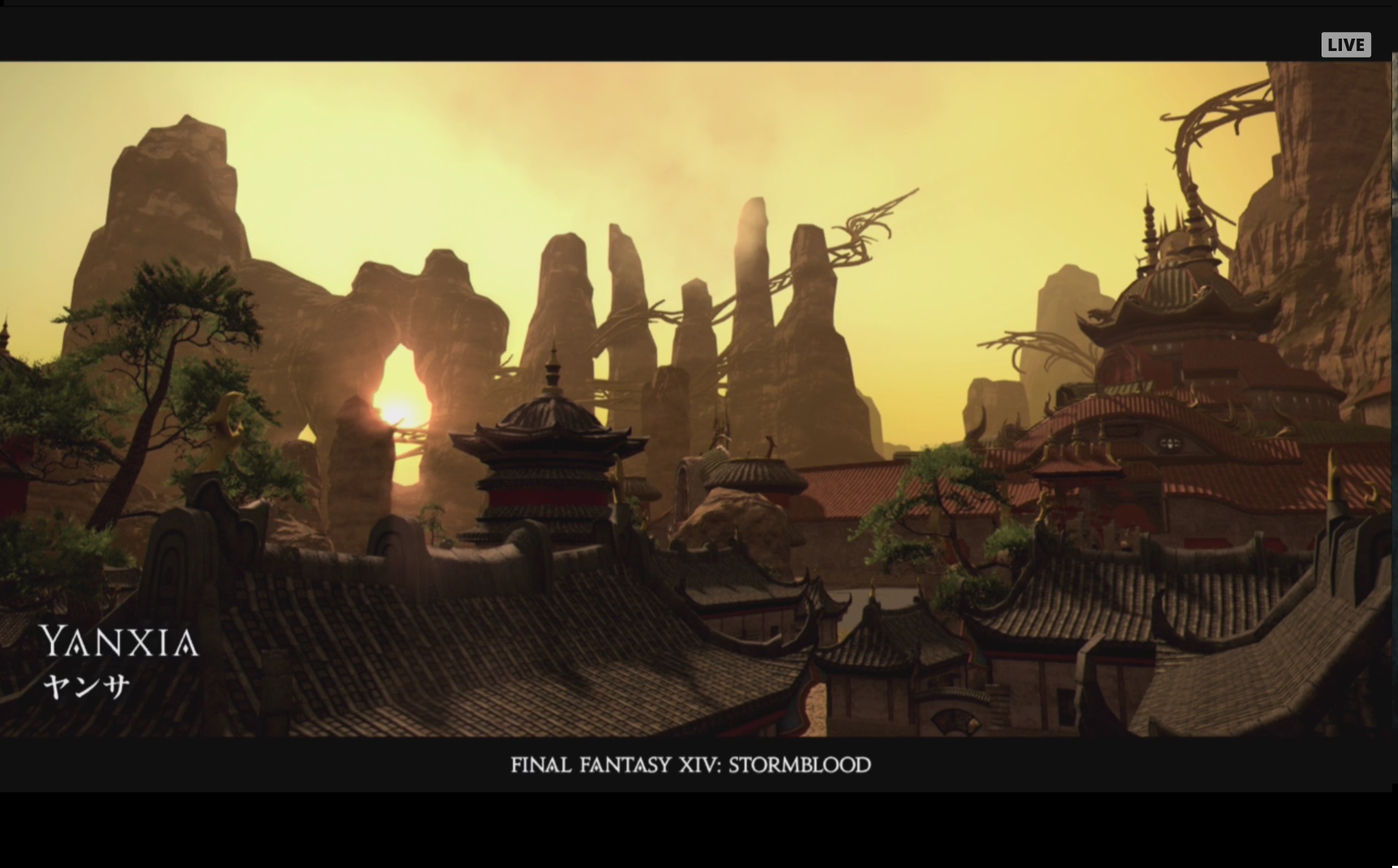 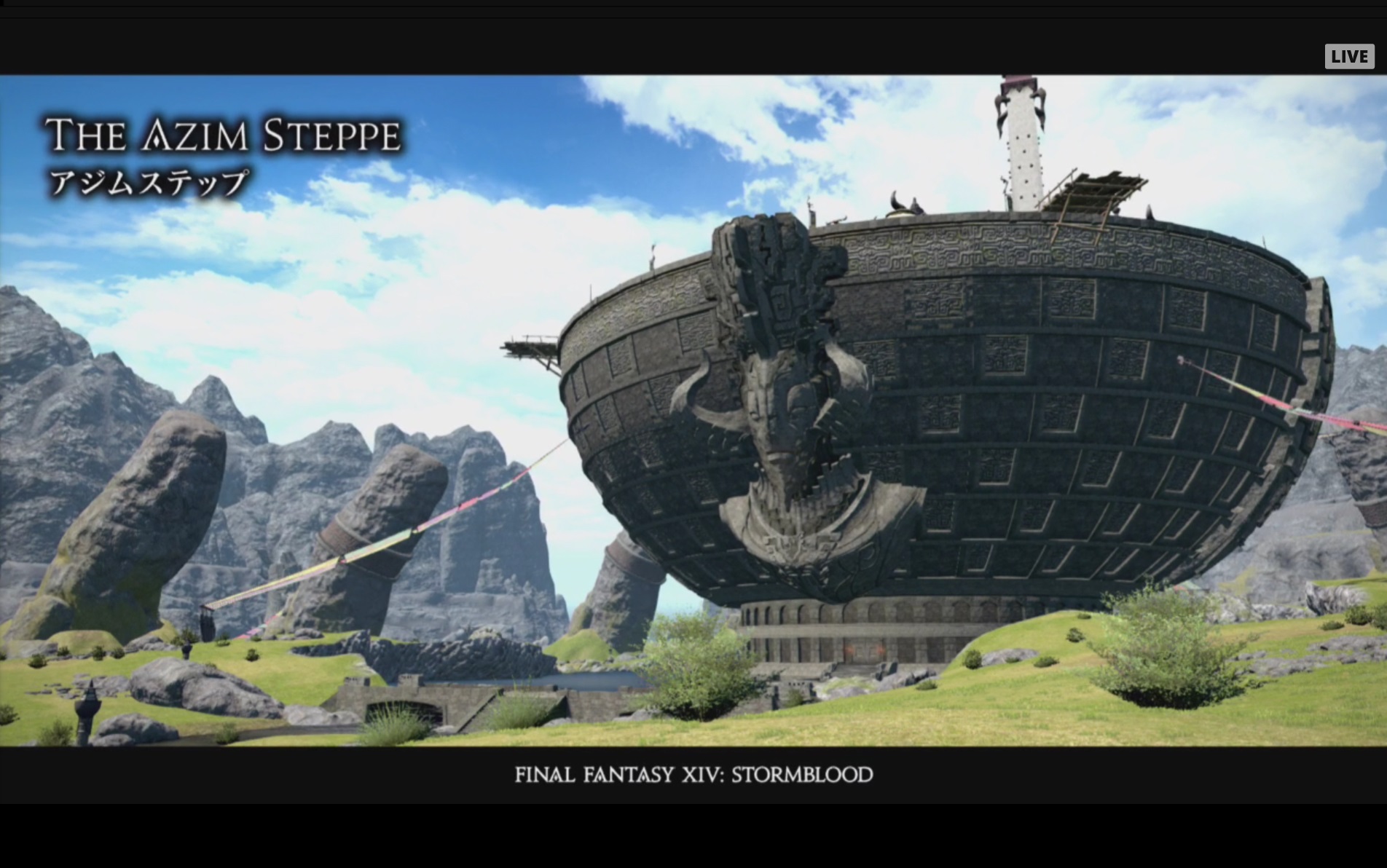 ​
Notice Yugiri and a new character named Gosetsu at the end of the trailer. While we are already familiar with Yugiri, and look forward to an expanded role for her after playing a very passive role in the Heavensward storyline, Gosetsu is a new character. We will likely be introduced to this man with the second part of Patch 3.5 The Far Edge of Fate next month.

If you examine the expanded world map, you might just find the four legendary creatures typically depicted in Chinese mythology as being the guardians of the four corners of the world. In the Japanese variation of the mythology, they are: Suzaku (vermilion bird), Byakko (white tiger), Genbu (black tortoise) and Seiryu (azure dragon). Could this have some significance? Who knows!

Stormblood will only have two new jobs and both will be DPS. The previously revealed Red Mage from the Tokyo Fanfest in December is primarily a ranged DPS with a melee stance, while Samurai is a full melee DPS, sharing Striking gear with Monk, and unsurprisingly wielding the swagger of both a katana and the fashion style of FFX's Auron. Like Red Mage, Samurai can be unlocked in Eorzea itself, so there's no need to race to Othard to take up the katana. It will also start off at level 50. Yes, I repeat. It is a DPS, not a tank. Please put the pitchforks down and let the FFXI veterans rejoice.

Its techniques resemble somewhat of a mix between Monk and Ninja, with constituent energy components "setsu", "getsu" and "ka". Energy will have to be stored in the katana and unleashed at just the right moment, so in terms of playstyle, we can safely assume that it heavily depends on timing. If you always wanted to play Ni-oh on PS4 without actually playing Ni-oh, this could be the next best thing. 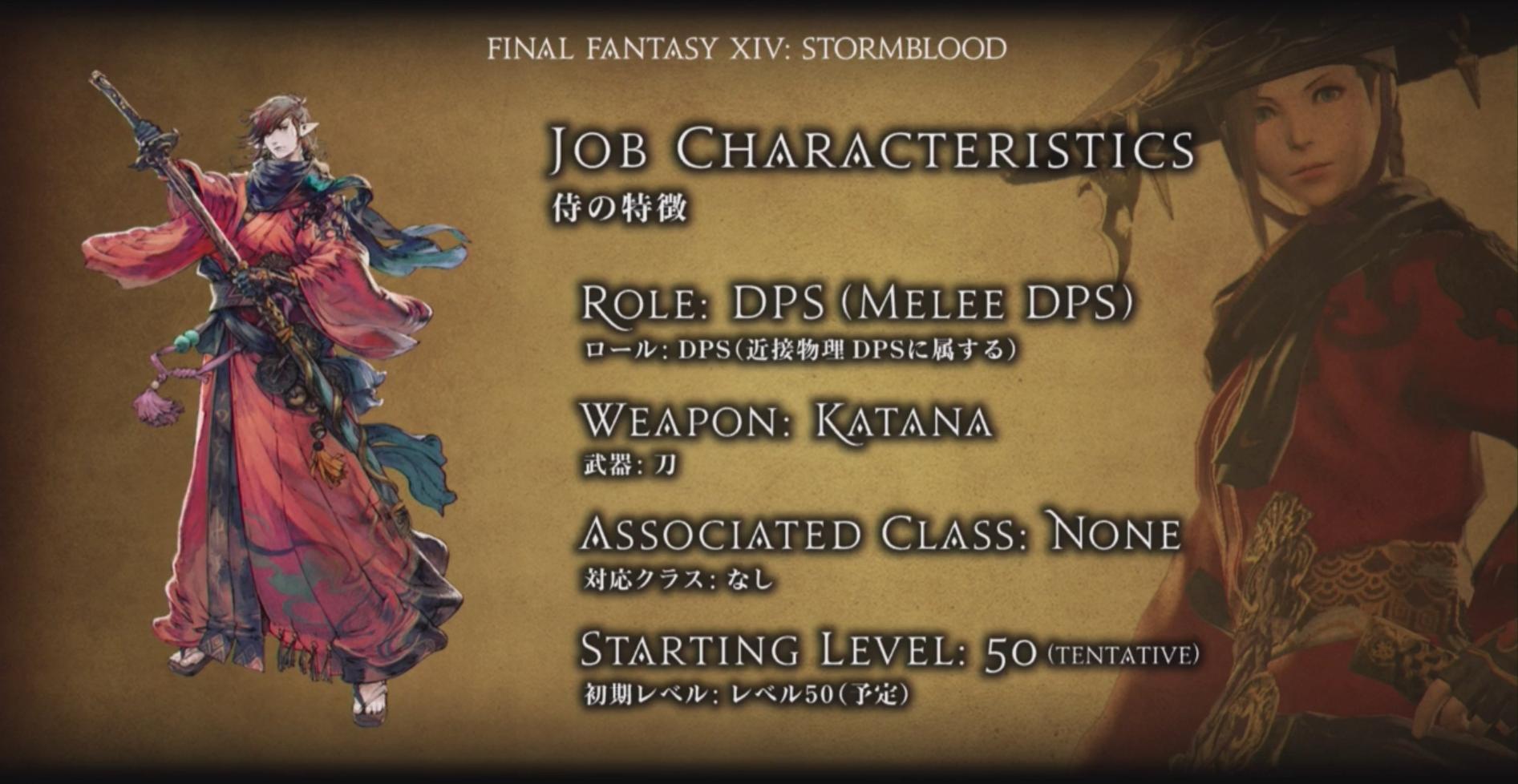 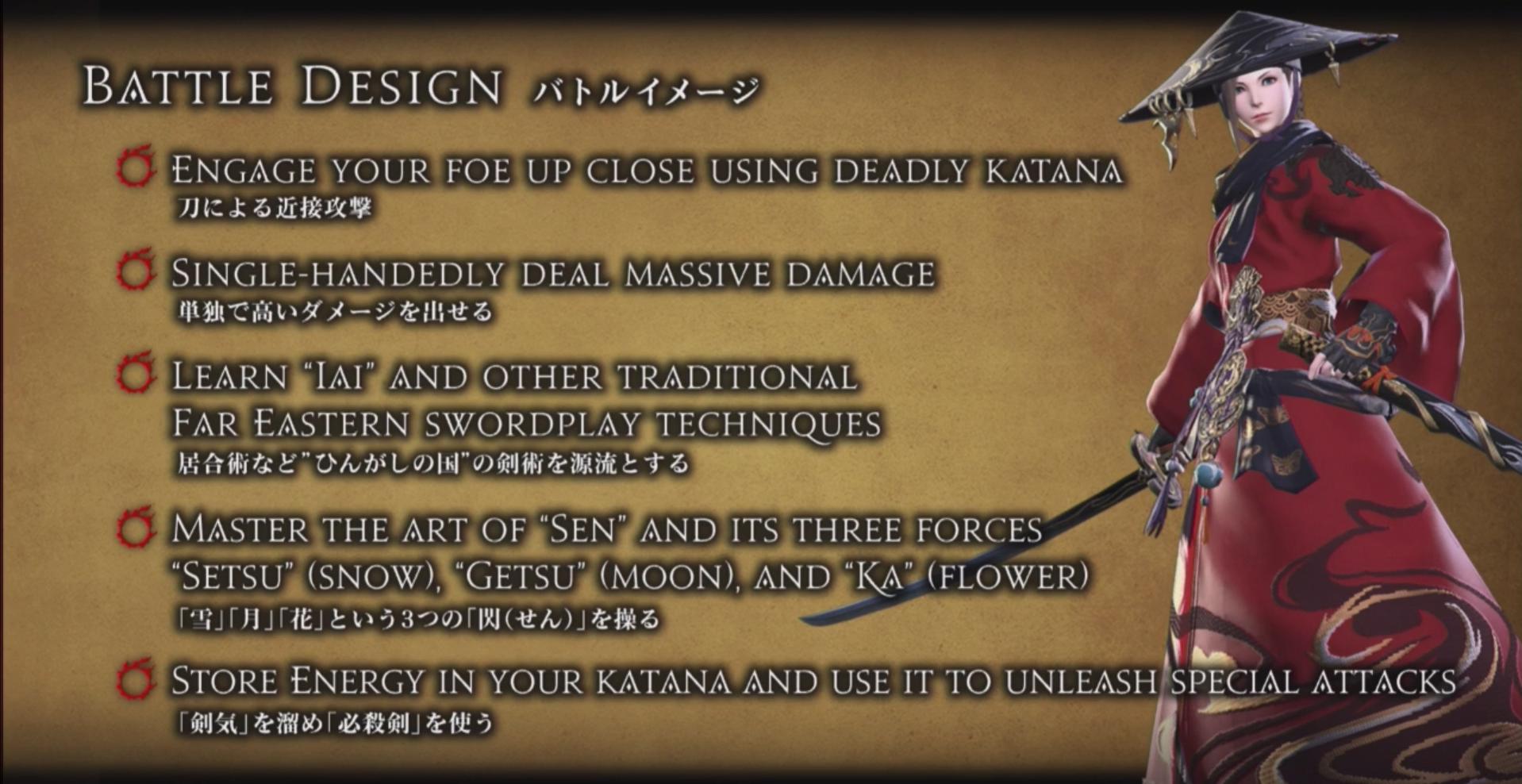 So how does FFXIV's own Auron look in-game? Here's some teaser footage.

The aforementioned port city of Kugane serves as the introductory main city of Stormblood. Notice the conspicuous Aetheryte in the centre and its array of shop stalls. 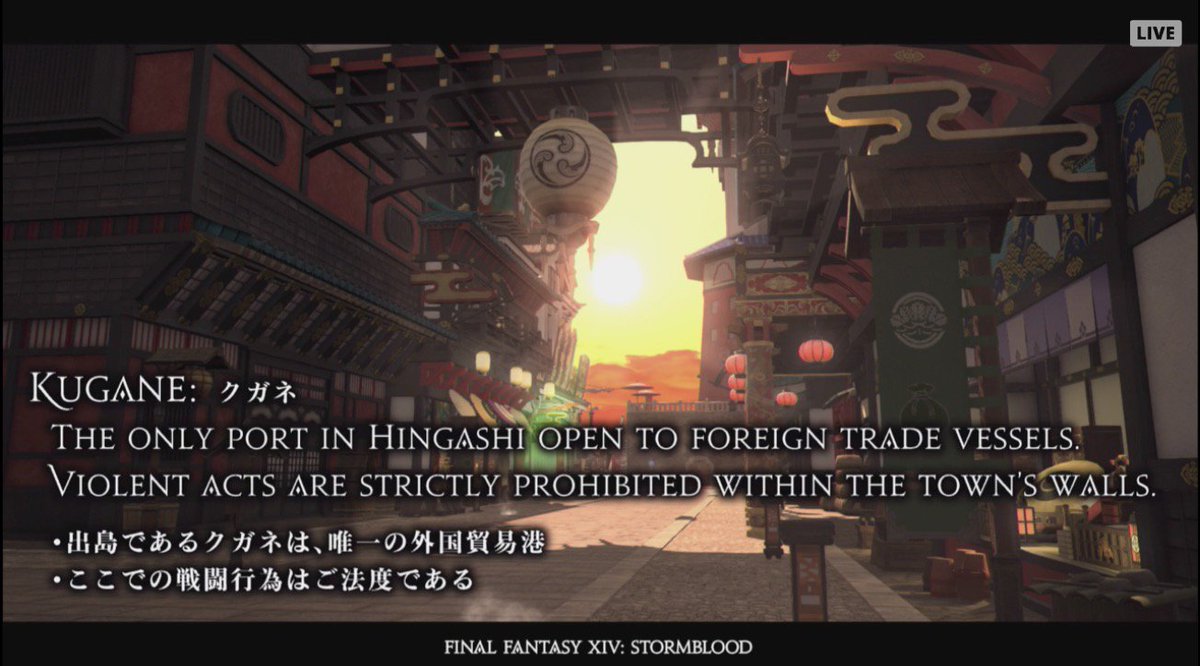 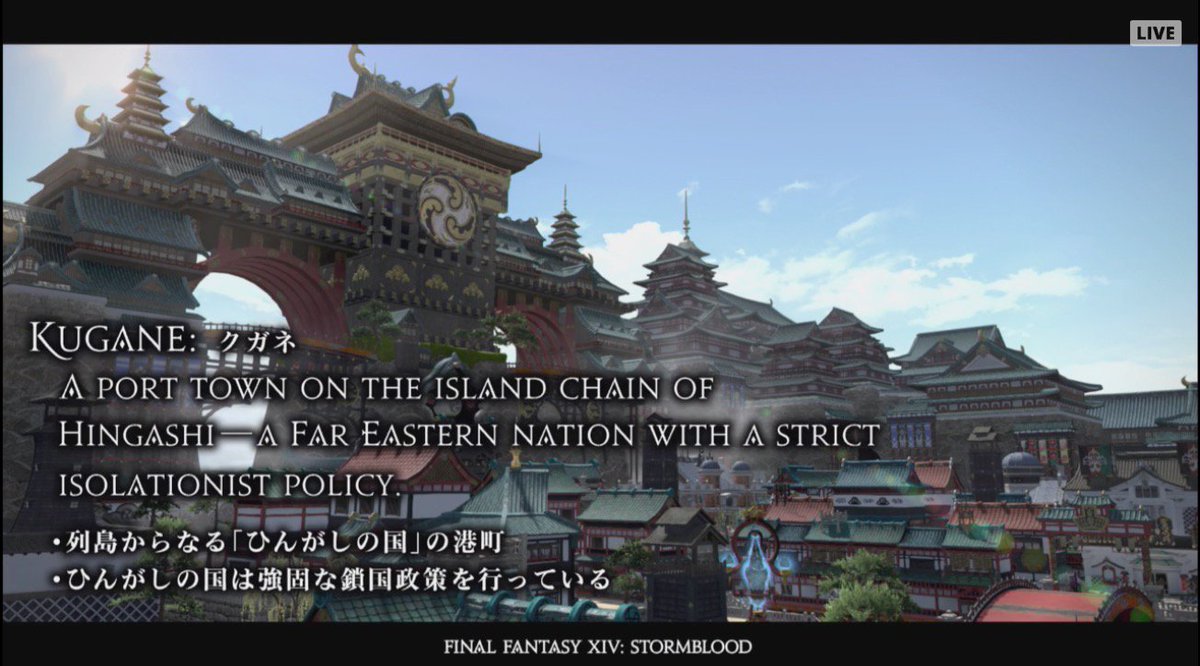 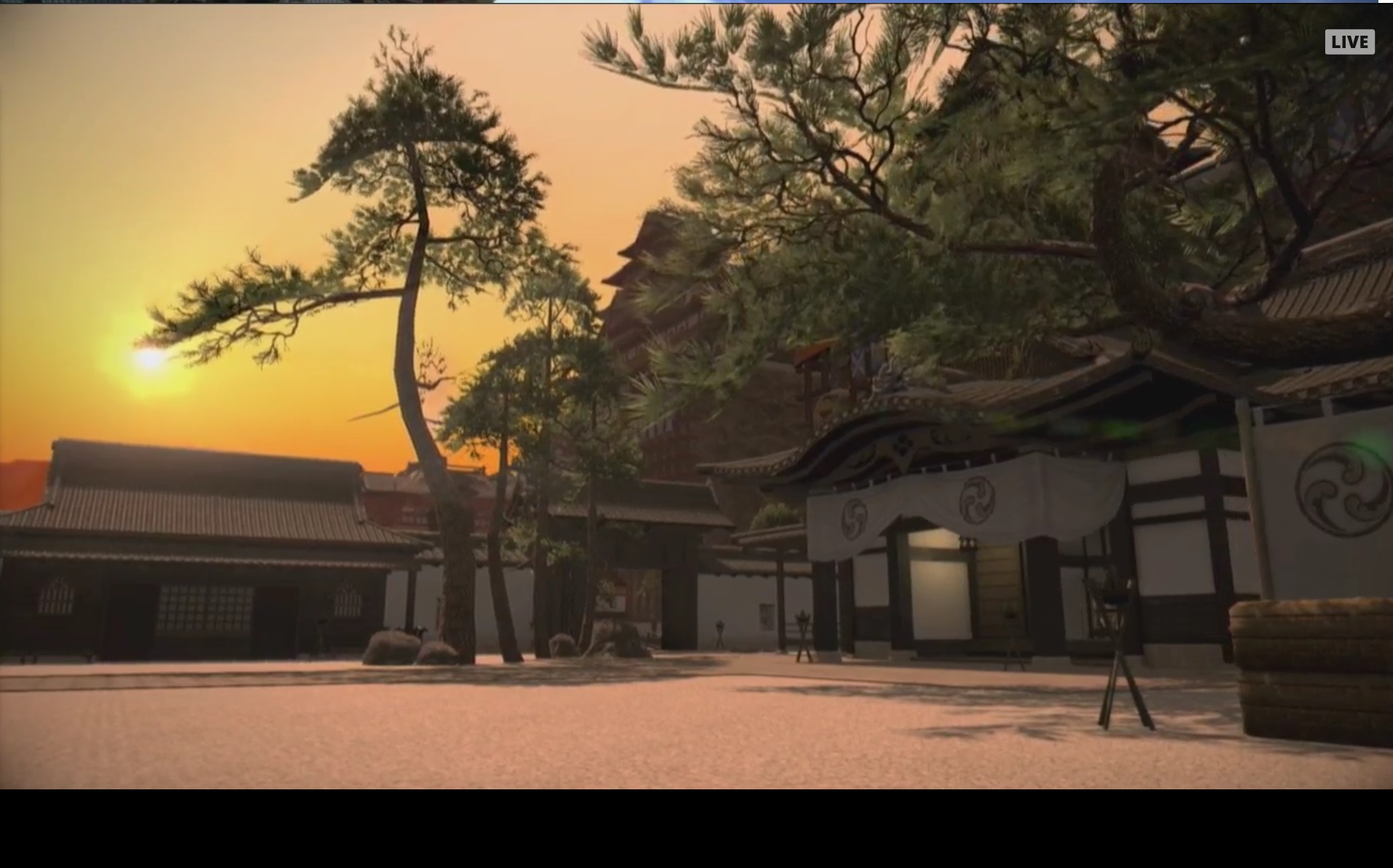 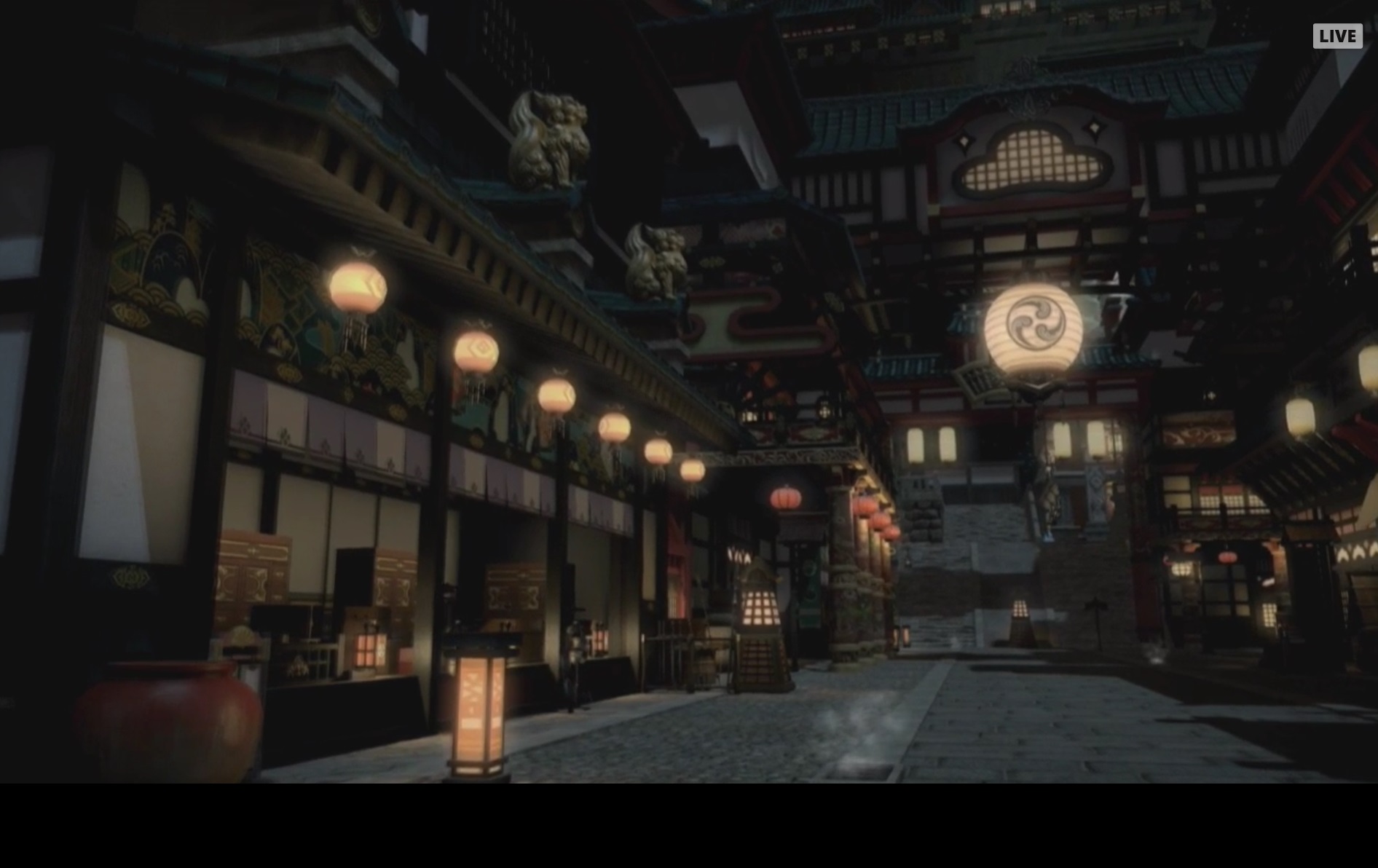 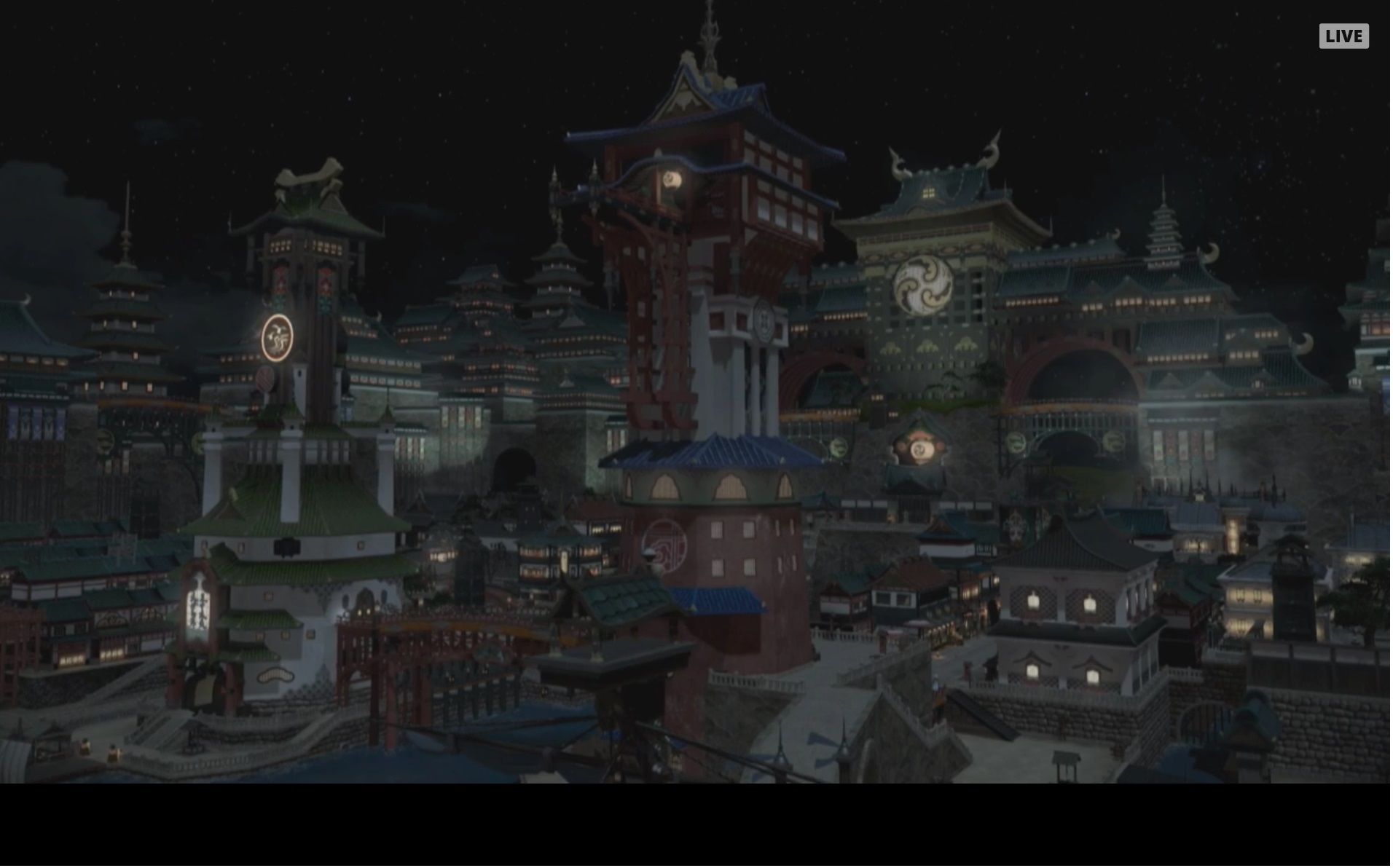 The fourth housing area has been revealed and it's...not Ishgard. Because who would ever want to live in that dreary snow-covered canyon inhabited by stuck-up Elezen? I wouldn't. Instead, you have Shirogane, an Othard housing zone. Note that this feature will understandably not be immediately available at launch.

There's another new Beast Tribe: the Kojin. They're like the Teenage Mutant Ninja Turtles, only without the pizza, presumably. Their deity and inevitable Primal fight?Susano. 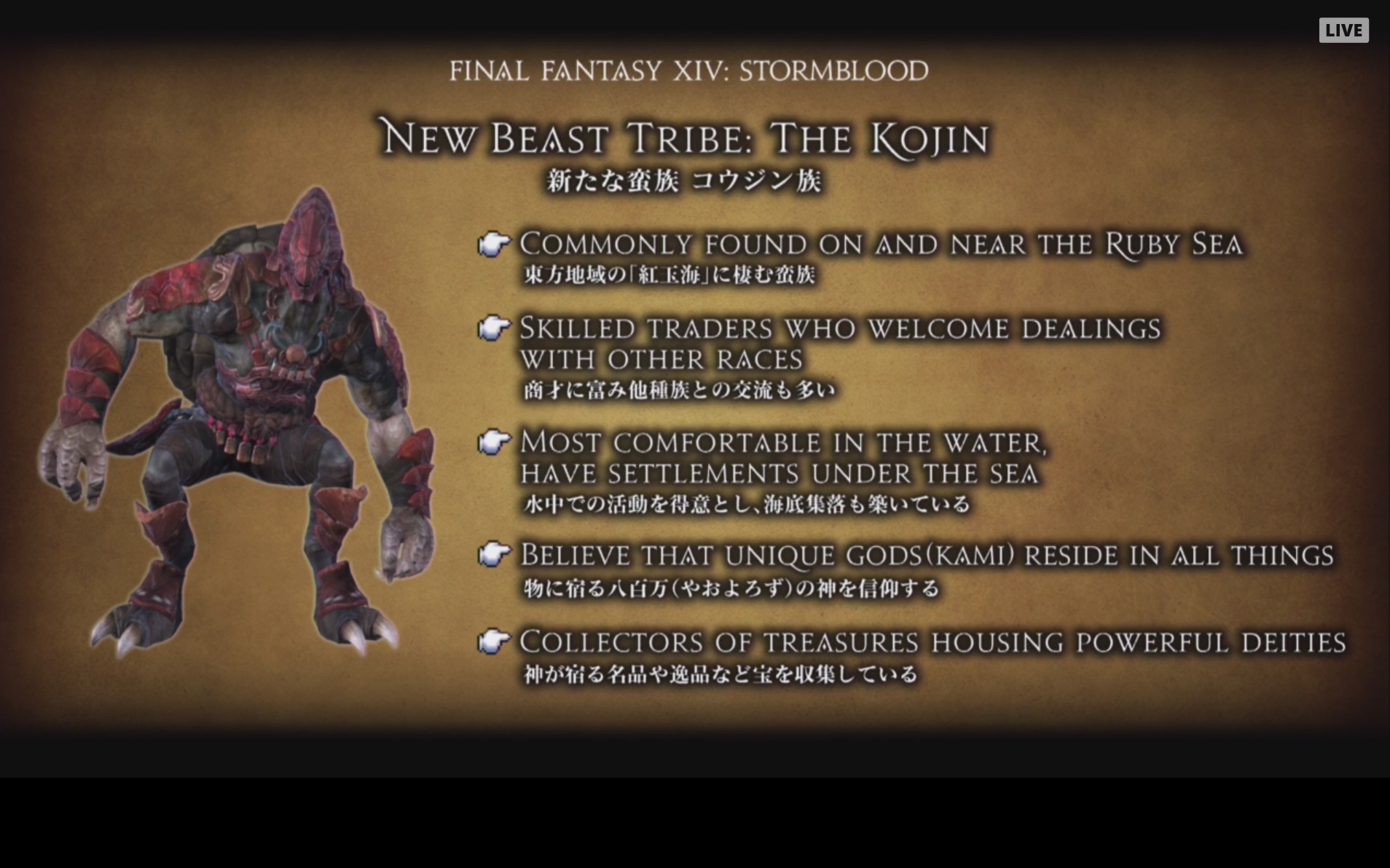 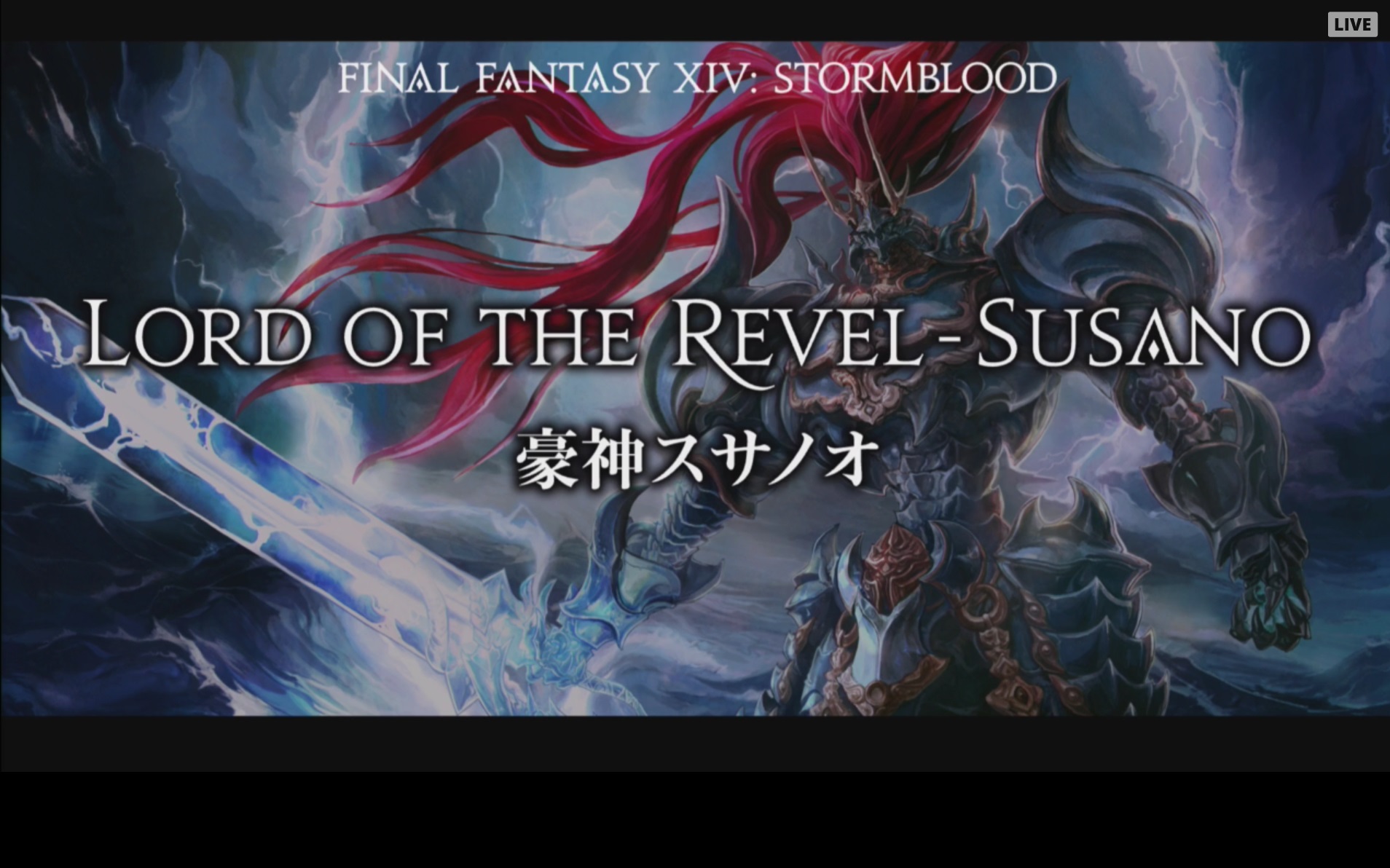 ​
4.0 will also double the capacity for furniture in houses. Also included will be the ability to move houses. Players are urged to upgrade to 64-bit if they haven't already, as you may not be able to see all the items on 32-bit architecture.

And finally, let us have a preview of Stormblood's theme song. Like Answers and Dragonsong, Nobuo Uematsu once again came back to compose the theme, with Susan Calloway on vocals. Here is a preview of Revolution:

Once inside, the creature purportedly forces slumbering victims into drinking vials of a mysterious substance known only tentatively as 'Fantasia'. Once ingested, it takes only 3 hours for the effects to fully take hold. The unsuspecting victim will wake to find themselves a Lalafell...
It looks like quite a nice area. I'm unlikely to ever play it, but I can appreciate it all the same.

The main area looks to be expanding on the same ideas of traditional Japan that Wutai drew from, and the giant statues remind me of Wutai too.

I hadn't heard of Doma while playing FFXIV, but I'm liking that they've brought Doma into FFXIV. Doma is, of course, the home of Cyan Garamonde in FFVI (another character heavily based on medieval Japanese warrior culture).

No new race this time though?
Any new race would just be needless shoehorning at this point especially when there's been no indication so far as to any other intelligent non-Beastman race outside of the current six. I think from a developer POV, it's a grueling task to try and redesign existing and upcoming gear and glamour equipment so that they work on a new race when the effort and resources can be directed at improving the existing races, especially when loud fan demand for greater customisation options is always knocking on their doors.

EDIT: Welp. Latest Live Letter states that they have no current plans for more character customisation options because it would be too much of a strain on the GFX team and for the servers to handle.

When they introduced the Au Ra, they lacked an adequate lore-based explanation for their sudden appearance. All we were told was that this race hails from the mountains and steppes of the Far East, but the only major Au Ra NPC at that point was Yugiri, a ninja refugee from Doma following its total destruction in the face of an imperial retributive counter-attack. So actual Au Ra NPCs would be very far and few in between, making the sight of hundreds of particularly female Au Ra players running around seem jarring vis-à-vis the given lore. It's only now with Stormblood that players will be able to visit the Au Ra indigenous lands and learn about their tribes, their customs and their history, so funnily enough this expansion probably would have been the more ideal time to introduce them as a new playable race.

I'm sure it's not beyond the realms of possibility to be able to play this expansion's content, Dan. True, you probably may not want to invest in a jump potion to skip the older content and be instantly brought forward to level 60, but you can conceivably rush through the basics of the 2.x and 3.x content without needing to put aside several hundred hours. I'm sure there will be people available to gladly help you blaze through dungeon runs expediently and potentially help supplement your leveling gear on the way with crafted alternatives if you're missing some gear drops. Naturally it will still require time and patience to wade through the heavily story-driven fluff, but setting aside a couple of hours a day to bang some main story quests and an occasional dungeon run or two out of the way can really help towards steadily building up a decent, steady rate of progress all the way up to 4.0. There's no real need for you to rush and to "catch up" unless you expressly wish to participate in the relevant endgame content such as raids while the iron is still hot.
Last edited: Feb 19, 2017
I'm kinda glad I have this on pre-order I fell behind when Heavensward was released as there was an issue with my pre order they sent me the US version and I couldnt register it to an EU account

Had to wait until August and my birthday to finally get it. I also then got roped into to switching servers by you lot so yea! Lol Not that I mind I'm happier than I was on Phoenix honestly. But yea the new areas look awesome and kicking the Garleans out is never a bad thing in my book.

It will be interesting to see how the game changes now PS3 support is gone, see where they take the game with a little less restriction and a lot more power as well as a better budget. As for housing I'll be happy if I can nab one before the Expansion drops though the ability to "move" will be welcome, would damn sure as helped us as we moved the FC around! Wonder if the space increases will affect Private Rooms as well?
You must log in or register to reply here.
Share:
Facebook Twitter Reddit Pinterest Tumblr WhatsApp Email Share Link
Top