Are there any musical tracks which blew you away in the FFVII Remake?

If so, why? Was it a nostalgic remix of a classic track which hit you in the feels? Or is it one of the original tracks which landed perfectly for you?

I'll discuss more about remixes of classic tracks later so I'll start with some of the new ones.

I just adore the very particular 80s vibes of this track. It has the beautiful electronic beats of an 80s teen movie (of the cool kind), and due to a large number of 80s films with teenage or young protagonists with this sort of music, I do associate the style with the feeling of being young. It is calming. In fact the entirety of Chapter 9 gives me 80s vibes, but this track really set the tone for the entire chapter.


And then we have the vocal tracks by Al Copeland Music.


Both of these tracks blew me away in their respective scenes. They really helped add colour to an already rich and colourful world. They helped make these scenes iconic and we'll certainly be talking about them in the years to come.

This is just a starting point to scratch the surface. There are so many amazing tracks in this game. I don't think I dislike any.

A few 'remix' style tracks from the OST.


It is stupid but also one of my favourite chocobo tracks of all time. I simply can't believe that they did this.

I adore this Tifa remix. I wasn’t sure I’d like remixes like this in the game but this one really works following the fairly lighthearted moment of Aerith whacking a guy over the head with a chair. Plus we finally get to see Tifa again after a lengthy absence and kick ass with her.

I LOVE what they did with the soundtracks,

Those Chosen by the Planet was remarkable as well. I don't know, I believe Square Enix did a marvelous job on the soundtracks.

I just adore the very particular 80s vibes of this track. It has the beautiful electronic beats of an 80s teen movie (of the cool kind), and due to a large number of 80s films with teenage or young protagonists with this sort of music, I do associate the style with the feeling of being young. It is calming. In fact the entirety of Chapter 9 gives me 80s vibes, but this track really set the tone for the entire chapter.
Click to expand...

Midnight Rendezvous was absolutely the first track that pulled me in simply for the composition, I loved it. I'm a massive fan of 80s electronic music... and I think it also helped I was binge watching Stranger Things at the time, too! Even though Midnight Rendezvous was definitely my favourite track during my initial playthrough, it had dropped one or two places by time I'd done my second playthrough.

If I were to narrow it down to my top three, plus a special mention, it would probably look like this:

1. Home Away From Home
2. Waiting To Be Found
3. Midnight Rendezvous
4. A Broken World

https://soundcloud.com/mercurial92%2Fsets%2Ffinal-fantasy-vii-remake
I've always been a huge admirer of emotionally driven soundtracks and Square Enix did a beautiful job at handling the delicate tones in the Final Fantasy VII Remake. I don't think it was actually until my second playthrough that I realised just how good Home Away From Home and Waiting To Be Found are.

I can't believe I still haven't gotten around to playing the remake. I did play the demo and thought they did a good job with the opening theme. I wasn't crazy about the mako reactor though. That Hip Hop de Chocobo is great though.

Oof! Square Enix have claimed all of the videos containing the tracks which people have posted in this thread...
Fair enough.

Mercurial said:
I've always been a huge admirer of emotionally driven soundtracks and Square Enix did a beautiful job at handling the delicate tones in the Final Fantasy VII Remake. I don't think it was actually until my second playthrough that I realised just how good Home Away From Home and Waiting To Be Found are.
Click to expand...

To me Home Away from Home almost feels like an 80s version of Kingdom Hearts' classic Dearly Beloved theme (particularly towards the end). It has the same quality and I really, really like it too. It is truly magical.

One of the things I disliked about the Crisis Core soundtrack was that, while there were some new melodic tracks which were wonderful, most of the remixed tracks and random background tracks appeared to lack the oomph of the original. Random guitar noises, etc. But the Remake has knocked it all out of the park and has tried a variety of musical styles, and new melodies which match the magic of the original.


Spoiler territory for another one.

I really like that Leslie Kyle got his own theme tune for key emotional moments in his story. It really suits him.
But I can't find it on YouTube because Square Enix have taken things down.

is by far my favorite. I'm a BIGGG fan of 80s music, and this one in particular just stands out from the rest of the OST. It's got a very dreamy quality to it like the "Interrupted by Fireworks" track from the original game--which I think may possibly be a major contributing factor in why so many people report a nostalgia feeling with it. It's not only nostalgic cuz the 80s vibes, but also cuz it reminds us of the original game.

I hated that this song wasn't the track that played throughout the whole traversing the underground slums area in that chapter. The tecno song was irritating, whereas Midnight Rendezvous was really soft and still fun to listen to.

And yeah, the clerith vibes is also a factor in why i love it so much lol 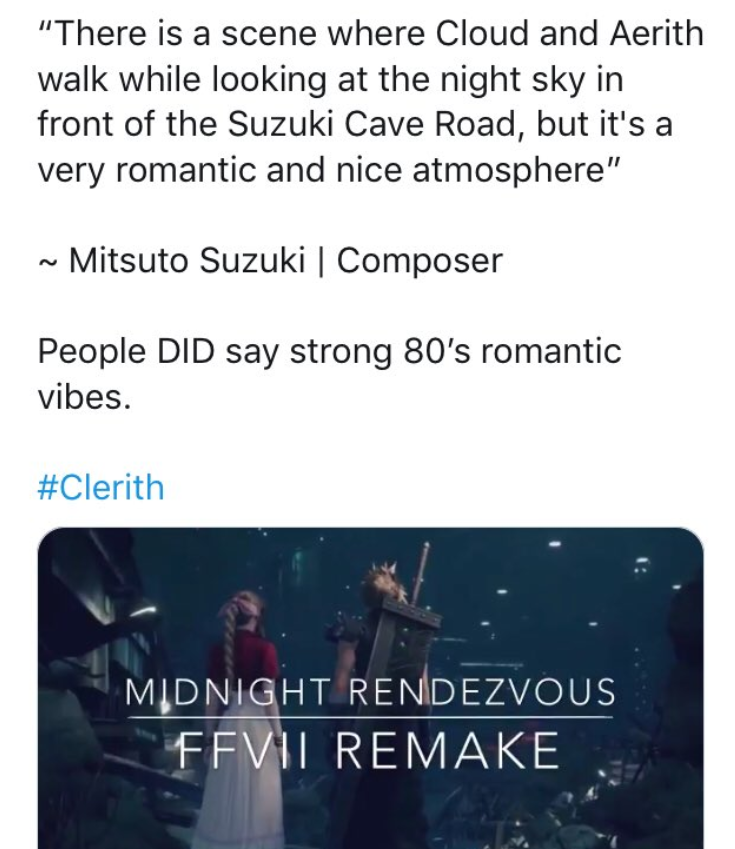 Another song that takes the cake is the song that plays during Aerith's Train Graveyard scene.


This track just blew me away. I can't recall a song in a FF game sounding like this and I think it's very mature and very cinematic. Masashi Hamauzu and Mitsuto Suzuki did fantastic work on this whole OST, and I think its about time people give them the recognition they deserve. Nobuo is amazing of course, but Masahi and Mitsuto (especially because his Mobius work is AMAZING, too) aren't less--Nobuo just has years of examples and nostalgia. Give these two the same decades of work, and they'll be just as memorable.

Descendent of the Ancients

The BEST track in the whole game. The way they combined Cloud's theme and Aerith's theme just had me in TEARS. I mean I was seriously trying to hold back from crying when I watched this scene, but the song--the notes, back and forth between

I have never heard a video game song as beautiful as that one minute. That part of the song is composed so beautifully, that I hold it up there with the quality of Hans Zimmer. That's how beautiful it is.

Seriously, please listen to this part of the song and tell me you don't get teary-eyed.

Have that one stuck in my head

Hollow, the first track we discovered, released before the game

I really do love the jazz remixes for the jukebox. I only wish we could get clean versions of them. One day I’ll own the soundtrack and hope these make it onto it.

For example:
^ this one in particular is brilliant!

I'm only up to (I think) chapter 6 - just got to Aeris' house - and I'm really not impressed with any of the music so far. In the original the music was extremely dramatic (the battle theme, boss theme and the one from the ShinRa building all really stand out) but so far they seem to have lost that dramatic element and are far too subtle, to the point that they're forgettable.