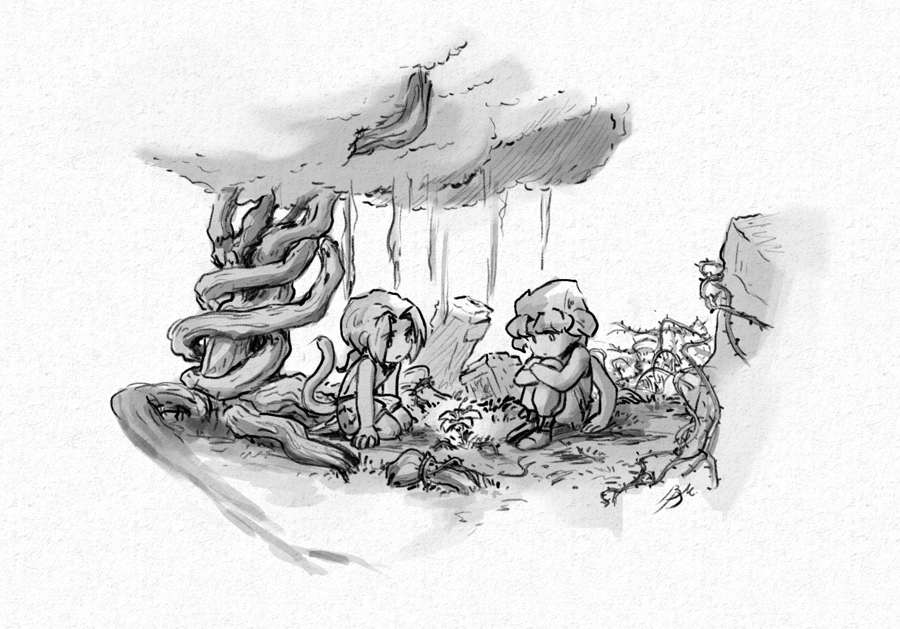 Have I caught your attention?
Ok, good.

So I'm a very freelance, very aimless artist that indulges in the making of webcomics. Because my life also revolves around videogames, specifically JRPGs, specifically a CERTAIN JRPG, I took it upon myself to make what nobody needed:

*Image is also a link to the webcomic

FFIX Gaiden. Classy, isn't it. Unoriginal and annoying name aside, this has been a huge undertaking of mine for a little over a year now. And despite sometimes being delayed by day-job fatigue and intense hand pains from a repetitive lifting injury (thanks, market basket) I have managed to update every monday for going on 14 months now.

The premise is simple on the outset: Instead of following the story of the main cast of the game we follow the four-armed guy known as Alleyway Jack/Gilgamesh in something of a coming-of-age story, set before, during, and after the events of the game. Through this we're able to see the world of Gaia from a different perspective, explore lore unseen in-game (headcanons, they call it) and expand on a character that nobody cared all that much about before. There will be a bunch of non-canon characters chucked in and there will be strange non-canon plot devices and I understand some people might not like that, but this entire thing has been churning in my head for going on five years now. I needed to get it out of my system. ...As slow as it's going.

That said, I have more than just that one thing to offer. I draw characters from the main cast too, as seen below: 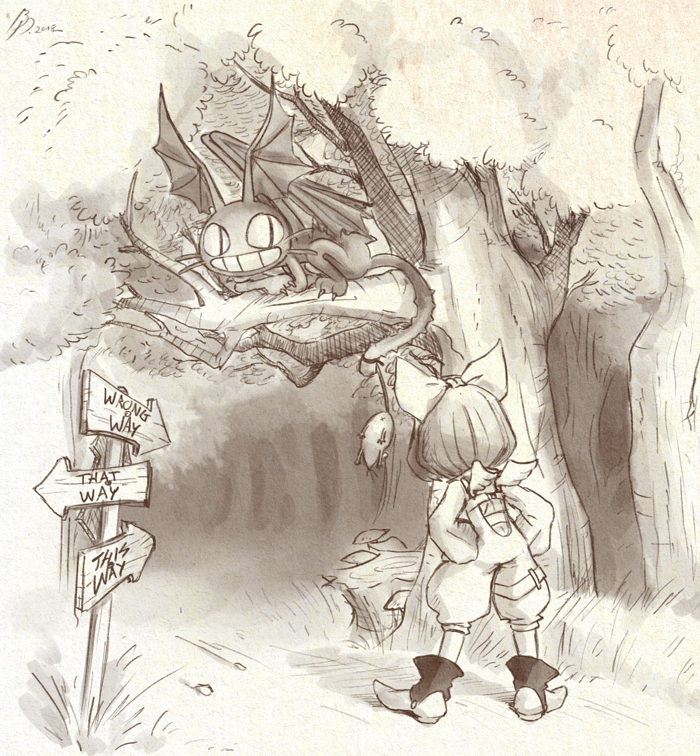 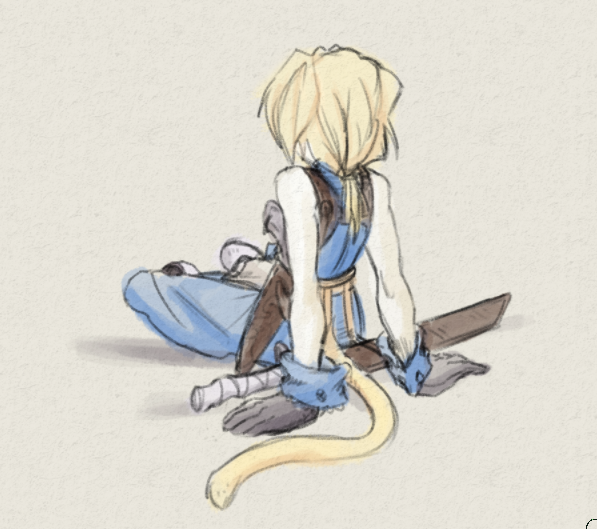 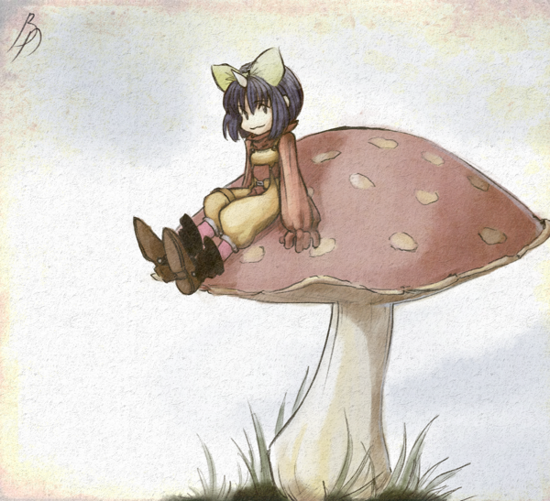 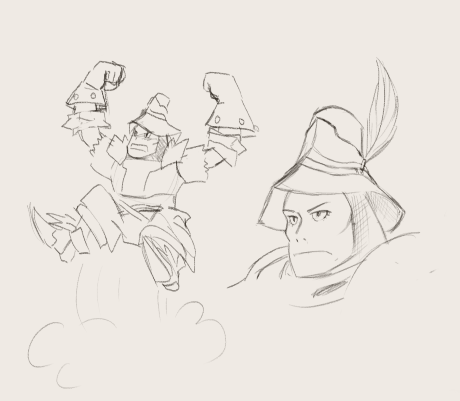 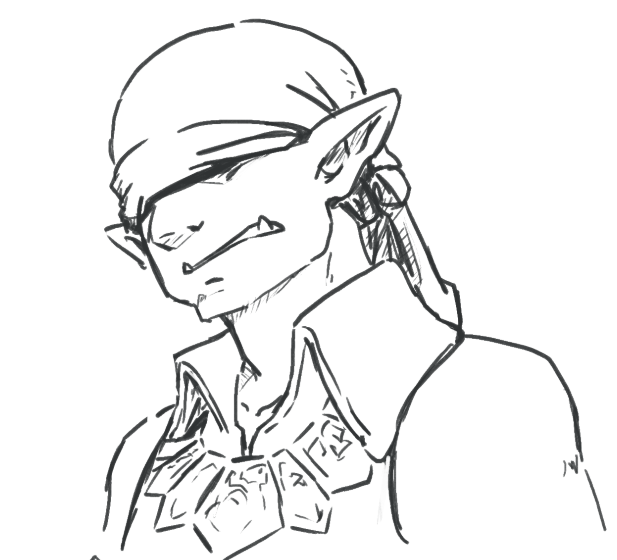 But Jack still has the limelight in my heart, sometimes sneaking into my drawings of other characters or just plain... being the only one on my mind. 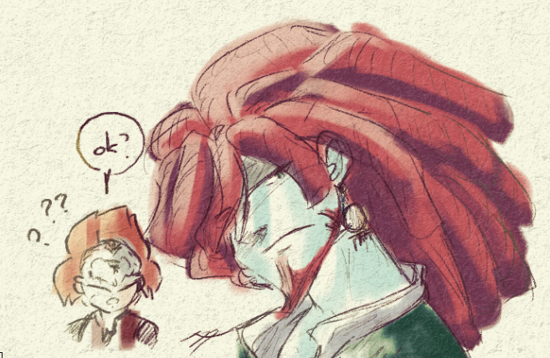 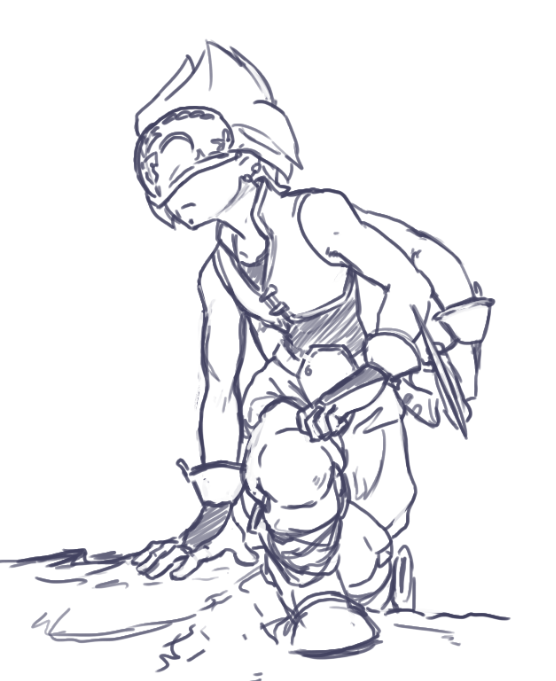 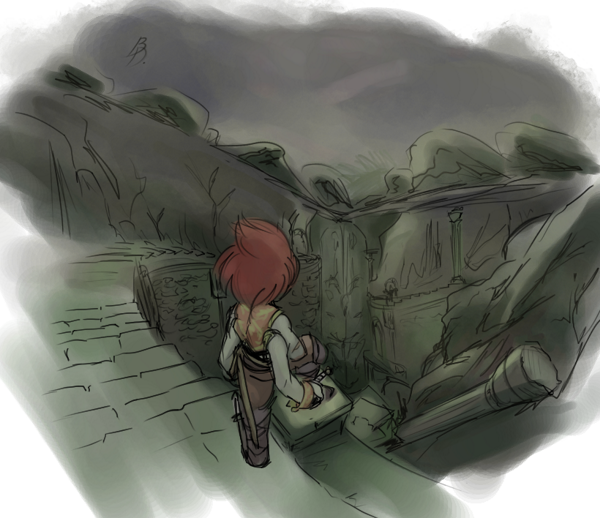 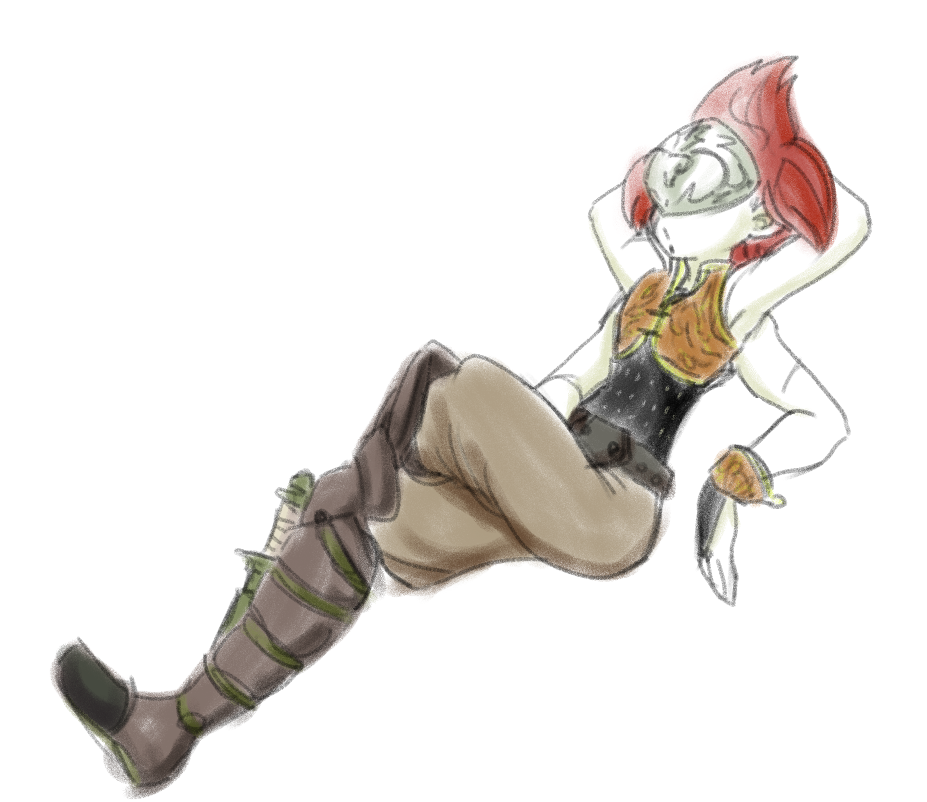 I also occasionally draw nothing more than the scenery from the game because I love it so much: 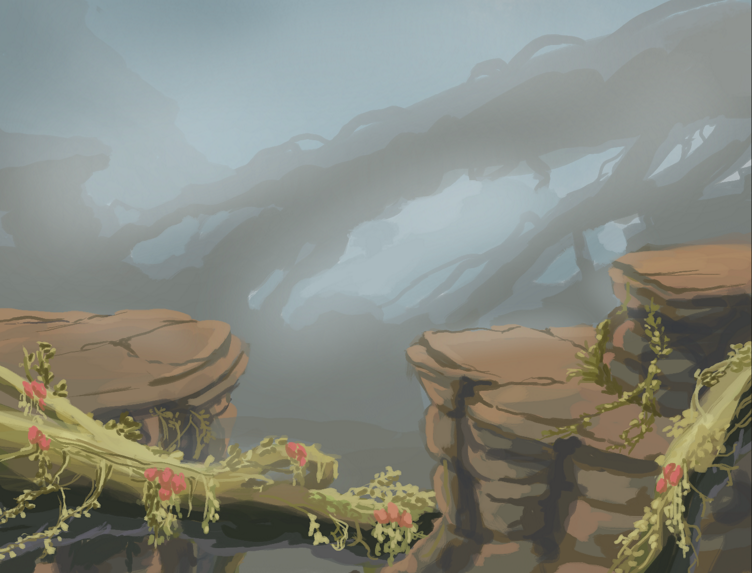 Anyway, I think you probably get the point by now. I'm obsessed, and I have been since FFIX's first release way back in 2001. I do draw other things, some of them being original pieces and others being from other titles (the like of which you may have never heard of). I'm not going to post those here, because this post is already incredibly long as it is, but if you're interested, you can follow the link below:

This contains more of my art, links to all my social media and e-mail, Ko-Fi, and also not just one but two of my webcomic! (Sorry tho, the sci-fi one is kind of on hiatus right now...) I treat it as a personal hub and portfolio mostly because it's one hell of a lot of trouble to toil about linking everything together, and also because some sites only allow for a certain number of referrals. It's easier to just have it all in one place, neatly organized and looking spiffy.

Also, if anyone is interested in supporting me on Ko-Fi, I do tend to (eventually) post little doodles of gratitude! That said, thank you all for attending my TED talk and I'm gonnas skiddaddle for now. Seeya!
Last edited: Feb 3, 2019

Wow! You are truly awesome!

For some reason I didn't see your post on the latest replies at the top of the page so I missed this until now.

These are all beautiful pieces of art.

I had a quick peek at the comics, but I can't wait to sit down and read them properly.
I also really appreciate the attention you give to Alleyway Jack / Gilgamesh. I'm also a huge fan of minor characters in FF games and I'm always trying to imagine what their lives might have been like, so to see you give life to them visually is a wonderful thing to behold.

Thanks for posting this!

I’m currently at work so I’ll check out your site when I get home, but first impression at these artwork...you have serious talent and skills.

I’d love to delve in deeper and see how it all comes together for you. I have a lot of respect for all kinds of artists out there. It’s also not everyday that we meet someone like you who can do webcomics...

Anyway loving this so far!

Because I would feel awkward otherwise, I'm going to try and have something else to show off whenever I reply on this thread. 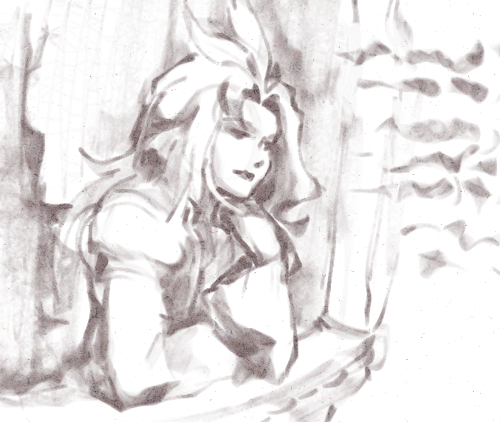 These are only a couple days old. The Kefka thing is the real shocker-- I don't often draw characters from FF6, aside from Terra.

beautiful art!! thank you for sharing

Thanks for sharing your artwork, I love your style! The recent piece of Kuja is one of my favourites, the minimal lines and flow just soothes my soul - fabulous work

Glad you guys are enjoying my stuff so far! My webcomic updated today, so feel free to have a look-see if you have the time!

Also here's a little something I forgot to put in the OP. 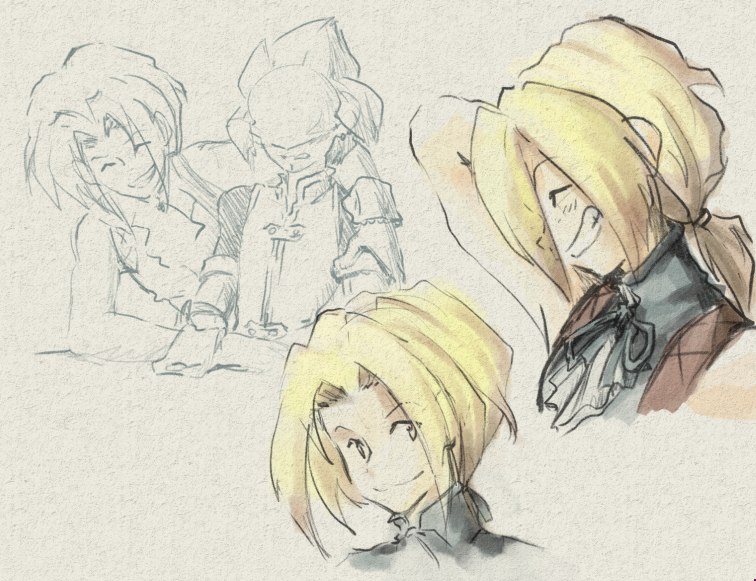 They’re really awesome, I love how they look like
Thanks a lot for sharing them with us !

That's absolutely amazing! Thank you for sharing! You should definitely do Blank! He's my favourite in FFIX!

How long have you been drawing for?

Since Blank was actually my favorite before Jack happened to me (I make it sound like a traumatic experience...) I have decided to take up the challenge and draw him. And after many attempts... 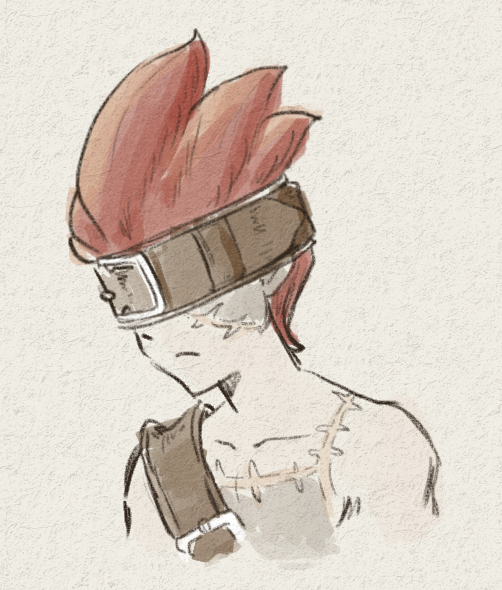 Yes! Yes, perfect! Now the challenge is to draw him full-body without any sign of Jack in the same p- 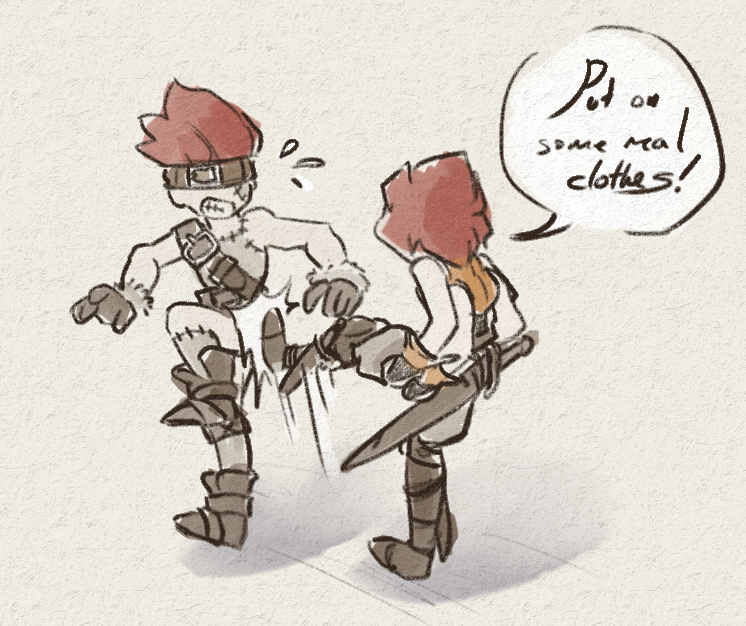 Oh well. Anyway, I honestly have no idea how long I've been drawing for. I did start as a child... and I'm pretty sure it was because I was trying to compete with my big sister, who had started drawing shortly before me.

Obviously my goals changed over time, and I do it more for fun and self-care than anything else these days.
Last edited: Feb 8, 2019

Wow! I wish I could see a video of you doing this process, I love watching people draw. Blank is definitely an interesting one to do. Like Six, I love his character style. Seriously, amazing job!

Haha, I have done exactly one(1) art stream in the past, and it was a very short one. I have also privately made tutorial videos for friends, but I guess I've been too nervous to do anything public. It would still be fun to try out!

My process is probably not half as aesthetically satisfying as others. I'm kind of astounded by speed draw/paint videos because it's like they sit down and do everything from start to finish, no cut-aways, no long pauses wherein they've gotten distracted by internet stuff, no giving up and calling a half-finished product 'done'... Ha. I'm very jealous.

bandokanon said:
Since Blank was actually my favorite before Jack happened to me (I make it sound like a traumatic experience...) I have decided to take up the challenge and draw him. And after many attempts...
View attachment 6987
Yes! Yes, perfect! Now the challenge is to draw him full-body without any sign of Jack in the same p-

Oh well. Anyway, I honestly have no idea how long I've been drawing for. I did start as a child... and I'm pretty sure it was because I was trying to compete with my big sister, who had started drawing shortly before me.

Obviously my goals changed over time, and I do it more for fun and self-care than anything else these days.
Click to expand...

Legit lol at the picture with Jack in it too. I love your art work!!

Been having hand trouble for the past couple days so I couldn't draw anything all too substantial aside from working (really super slowly) on the comic-- but today I am well enough now that I at least feel like I can post more OLD stuff. So I'm gonna do that while I let my hand recover. 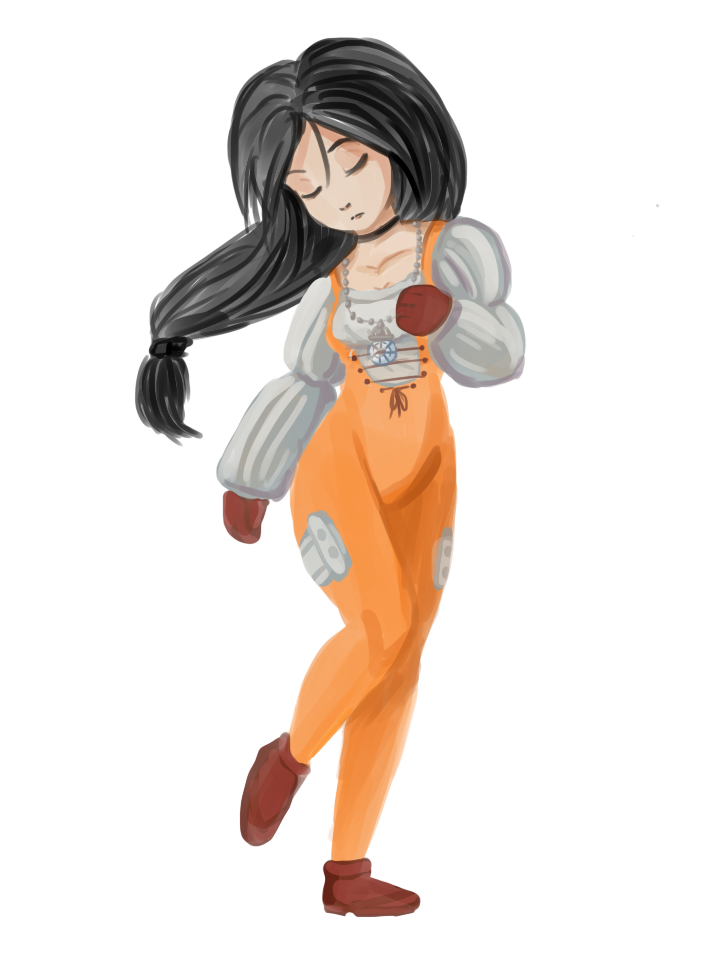 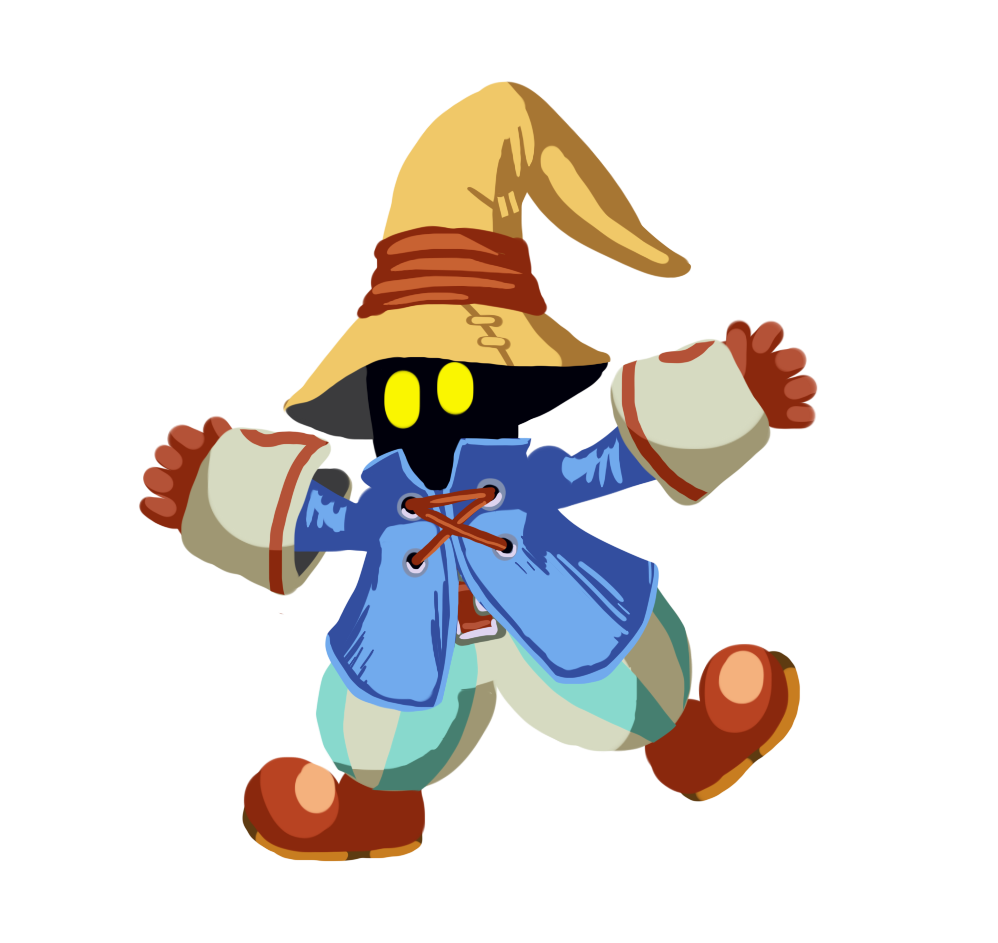 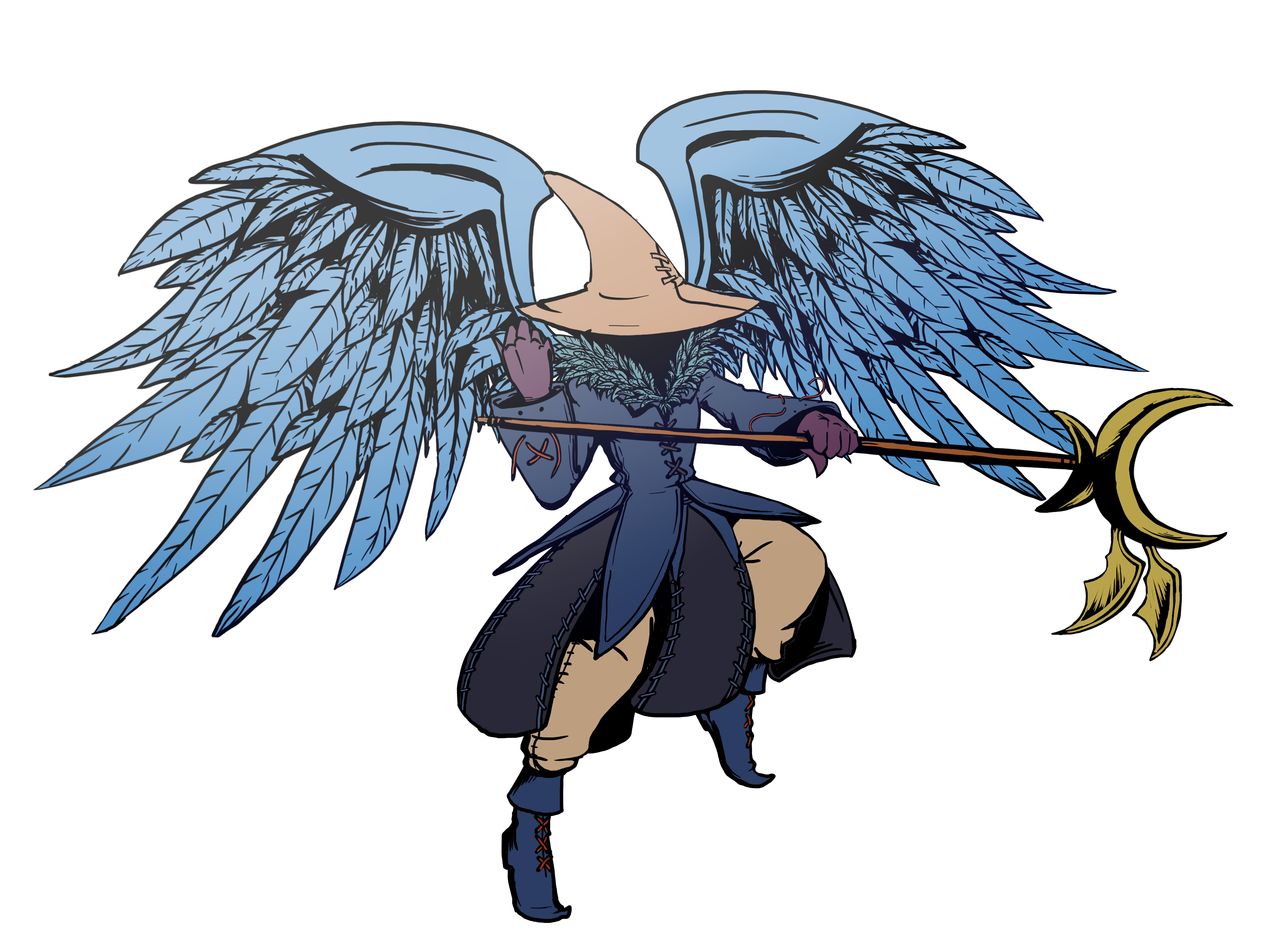 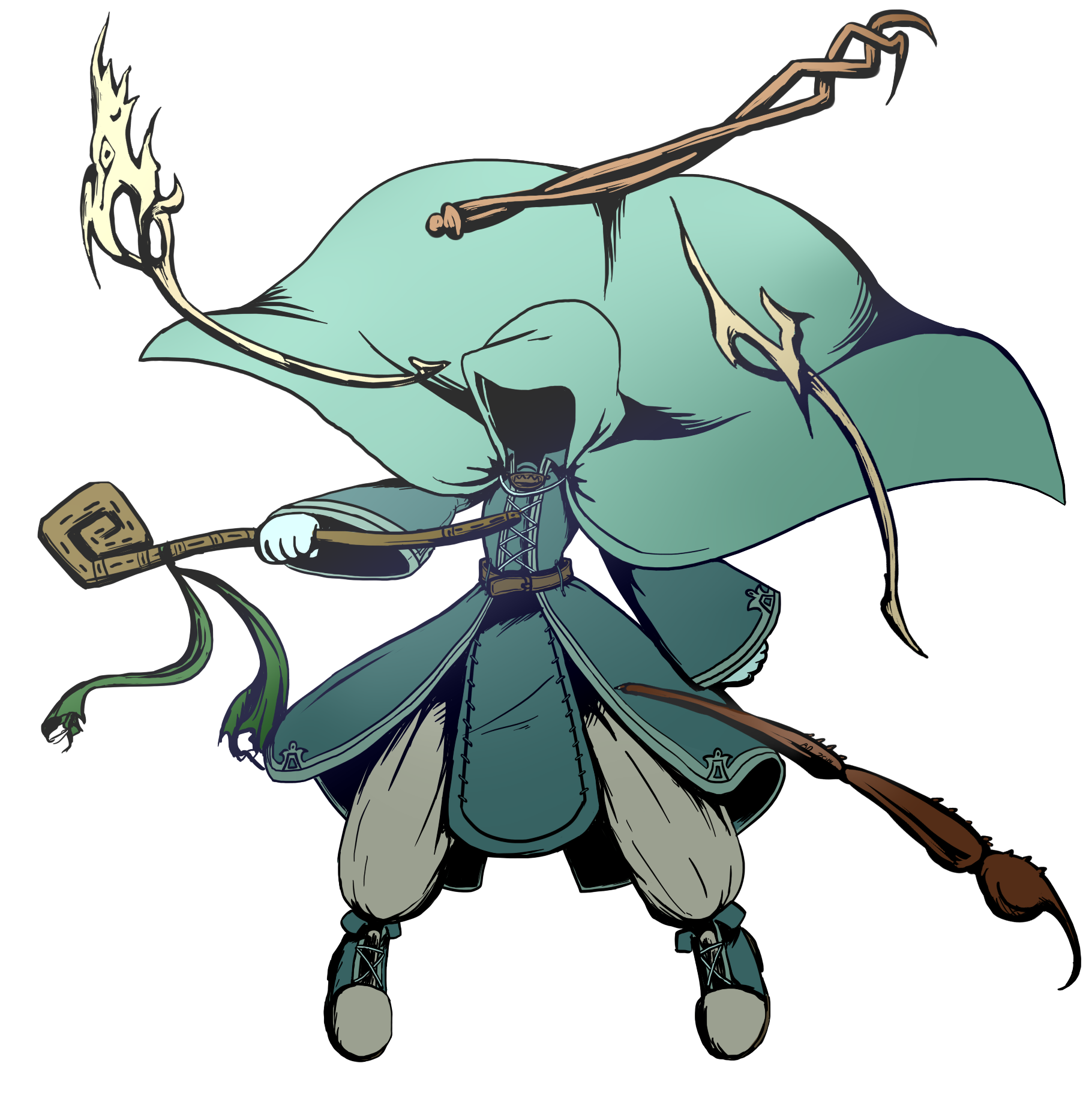 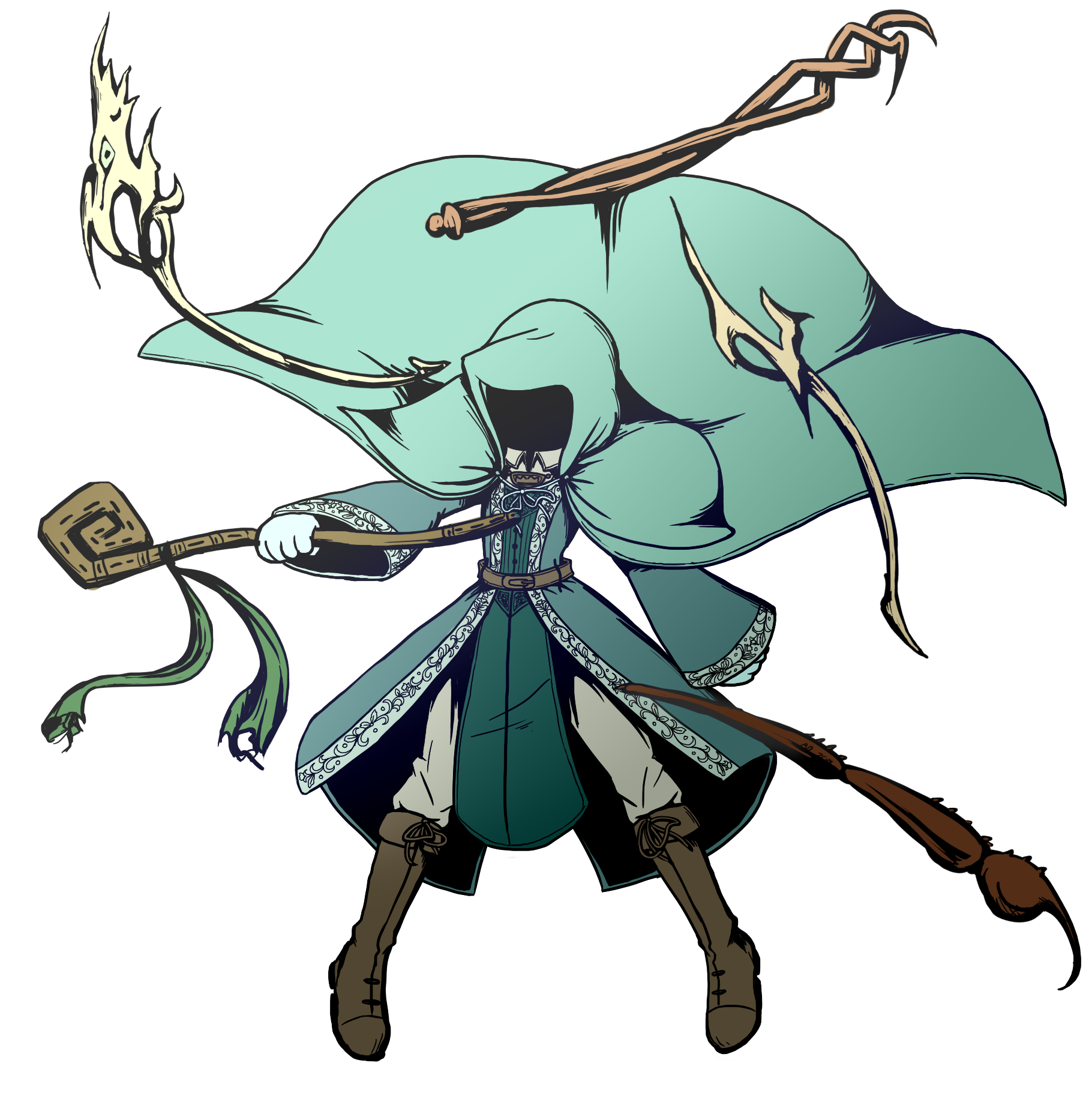 Same year as the Black Waltz one, same style. This is actually a really old OC of mine that was designed to exist in all Final Fantasy worlds. But also kind of not an OC? He was based off the Black Magic Shopkeeper in FF1, just for fun. His name is kind of funny/weird, too. In every version of Final Fantasy that allows for his existence, his name and appearance slightly differ. And they're all plays off the word "Melon". So it goes like this:
FF1 - Meln
FF2 - Mern
FF3 - Merlun
FF4 - Meron
FF5 - Meln (again)
FF6 - Merun
FF9 - Merun Carver

What you're looking at right now are his two FFIX outfits. The second one is kind of an upgrade from the original.

But uhh... He kinda always exists alongside another "meant-to-recur" OC that's probably much older. Probably my first ever fandom OC, even. 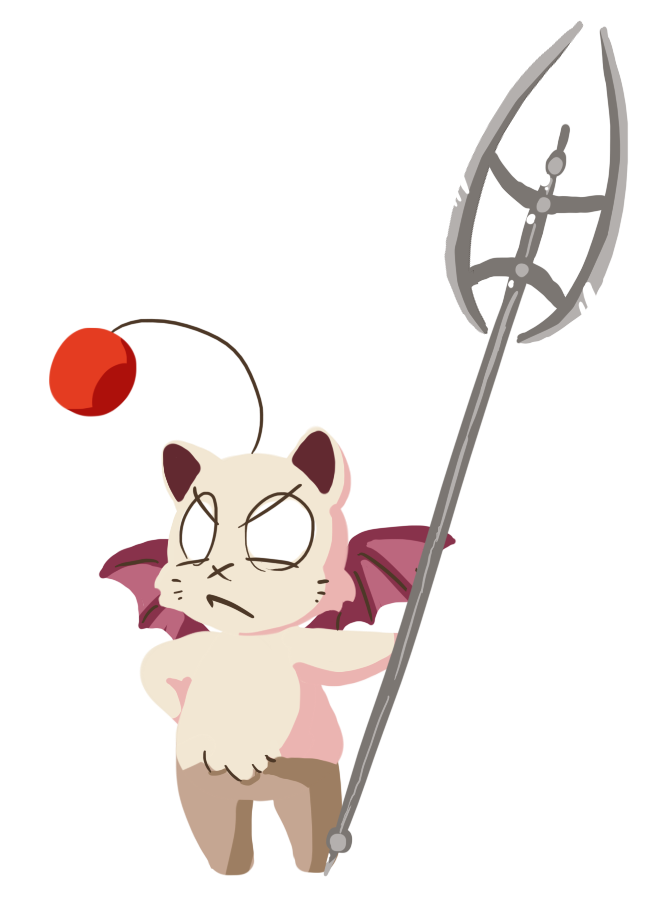