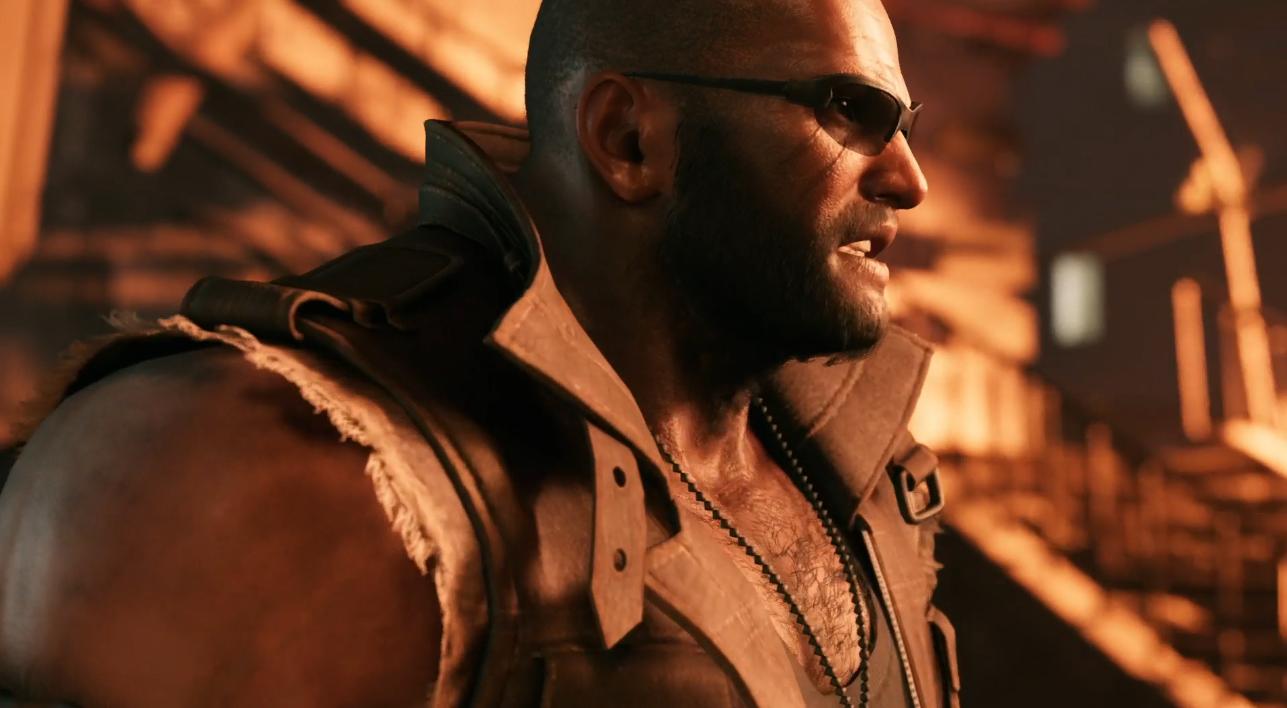 What better way to start the week than with a bit of casual eco-terrorism and destructive vandalism of private corporate assets? Without much fanfare (or any fanfare at all), Square Enix have decided to stealth drop the awaited demo for the Final Fantasy VII Remake on the digital PlayStation Store.

https://twitter.com/i/web/status/1234389422608723969
This demo is free but will set your console hard drive back at least 7.33GB. It will cover the entirety of the opening Sector 1 Mako reactor bombing mission, meaning players will be able to test the new hybrid real-time action and ATB with pause battle system against a real boss encounter. Note that your progress in this demo will not carry over to the final product, on account of the fact that the demo build may not match with the build presented in the final release.

Nor will this demo will be permanently available - it will remain on the store until 10 April when the game officially releases.

Once inside, the creature purportedly forces slumbering victims into drinking vials of a mysterious substance known only tentatively as 'Fantasia'. Once ingested, it takes only 3 hours for the effects to fully take hold. The unsuspecting victim will wake to find themselves a Lalafell...
The irony of going to London to celebrate the FFVII Remake meaning that I've ended up being behind in playing this.

I played this tonight and I can say I am very happy with what I am seeing so far. The detail is stunning. To think that we only see the train station and the Mako reactor, yet they managed to fit a lot of detail to make the world seem alive. Even simple things like the train schedule and line maps help.

The posters and drinks machines were another excellent touch. I have a few comments about them (spoilers in case anyone wants to go in blind).
Did anyone else notice the Crisis Core references in Banora White apple juice? Also it seems that Icicle Inn exports mineral water, which is quite nice. The hair tonic to make hair extra spiky is a funny joke about Cloud, I guess. Finally I noticed a cartoon dog character in an advertisement for something called 'The Adventures of Stump: Book 3' as far as I could make out. Little things like that really help to make Midgar feel lived in. Plenty of new stuff for us to find in Midgar, it seems.

But my favourite thing? Barret and Cloud! The tension between them is excellent and I love all of their interactions. Barret is such a badass with a powerful presence and I think even the way he climbs ladders is awesome.
I'm always amazed how your eagle eyes see all these tiny details, Dionysos! I swear I'm so blind! I thought I saw around in the demo, but it seems I didn't see/try to see enough. xD

I really like the demo. The soundtracks were awesome (I got shivers when I heard the Seph song appear in the opening movie of the demo!!!), the graphics was nice and I loved how fluid movements were.

I kind of find it hard to fully understand the battle system yet, but I guess I will have plenty of time with the full game to learn it...? (That staggering thing confused me haha. Also need to get used to the buttons.)

I loved how many interactions we could see between the characters. Cutscenes were super nice as well. Can't wait to play the actual game. T___T
I've pretty much put on my blinders since the last trailer drop that had the Honey Bee Inn stuff. I don't mind screenshots and a few small clips but the last trailer just made me realize I really just want to go into this game as 'blind' as possible now... so I don't have plans to play the demo. I want to wait till I can officially do that stuff on the game! I think it really helps with the extended wait

Though to be honest I've been so swamped with adulting things that I probably wouldn't have time to play anyway. I think by release date I'll have all my ducks in a row and will be able to devote myself to this game. That's the plan anyway.

JigoKuu said:
I'm always amazed how your eagle eyes see all these tiny details, Dionysos! I swear I'm so blind! I thought I saw around in the demo, but it seems I didn't see/try to see enough. xD
Click to expand...

I played it again and took screenshots of these details.

Here is the Banora White apple juice ad. Immediately confirming that at least some references to Crisis Core shall be found in the game. 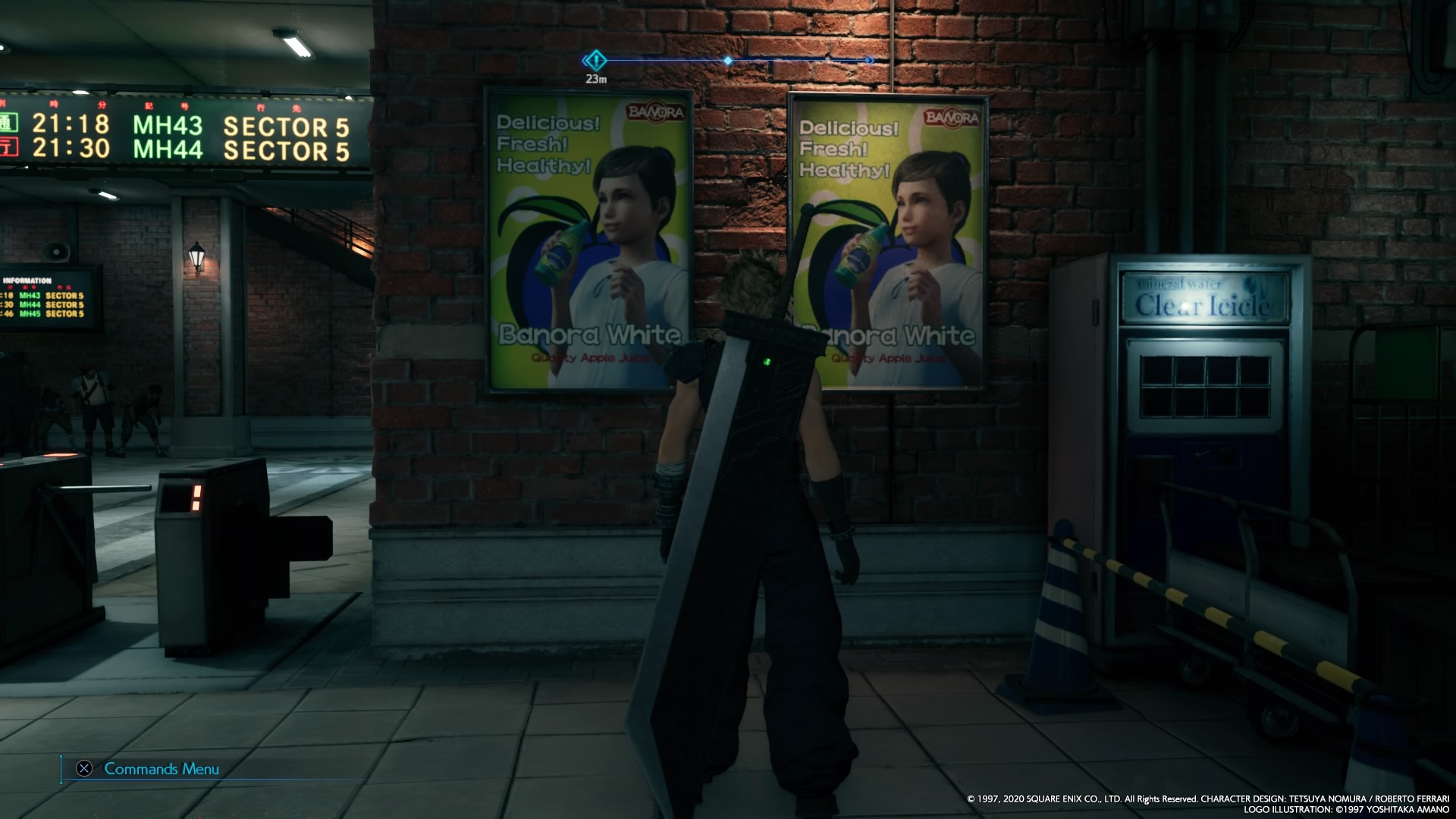 The hair tonic (middle). Notice how it says "For astonishingly radiant & spiky hair!" as a likely joke about Cloud.
The cat poster (right) is also interesting. It reminds me of that old FFXV demo where they controlled a cat exploring a train station. Not sure if this is mocking that or if it is something else entirely.
The handbag ad (left) seems normal enough to me, but I wish I could zoom in to read the small print. 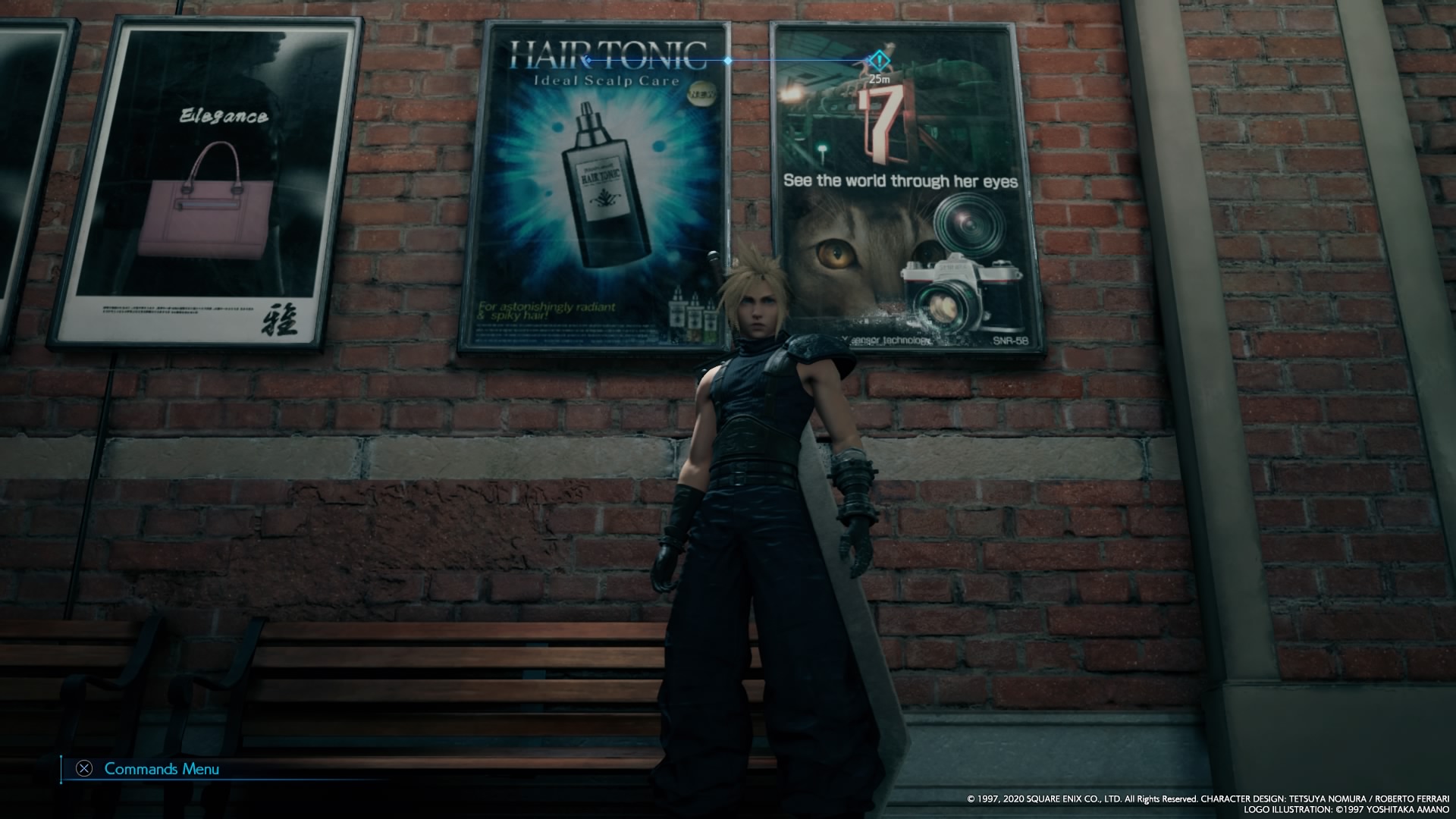 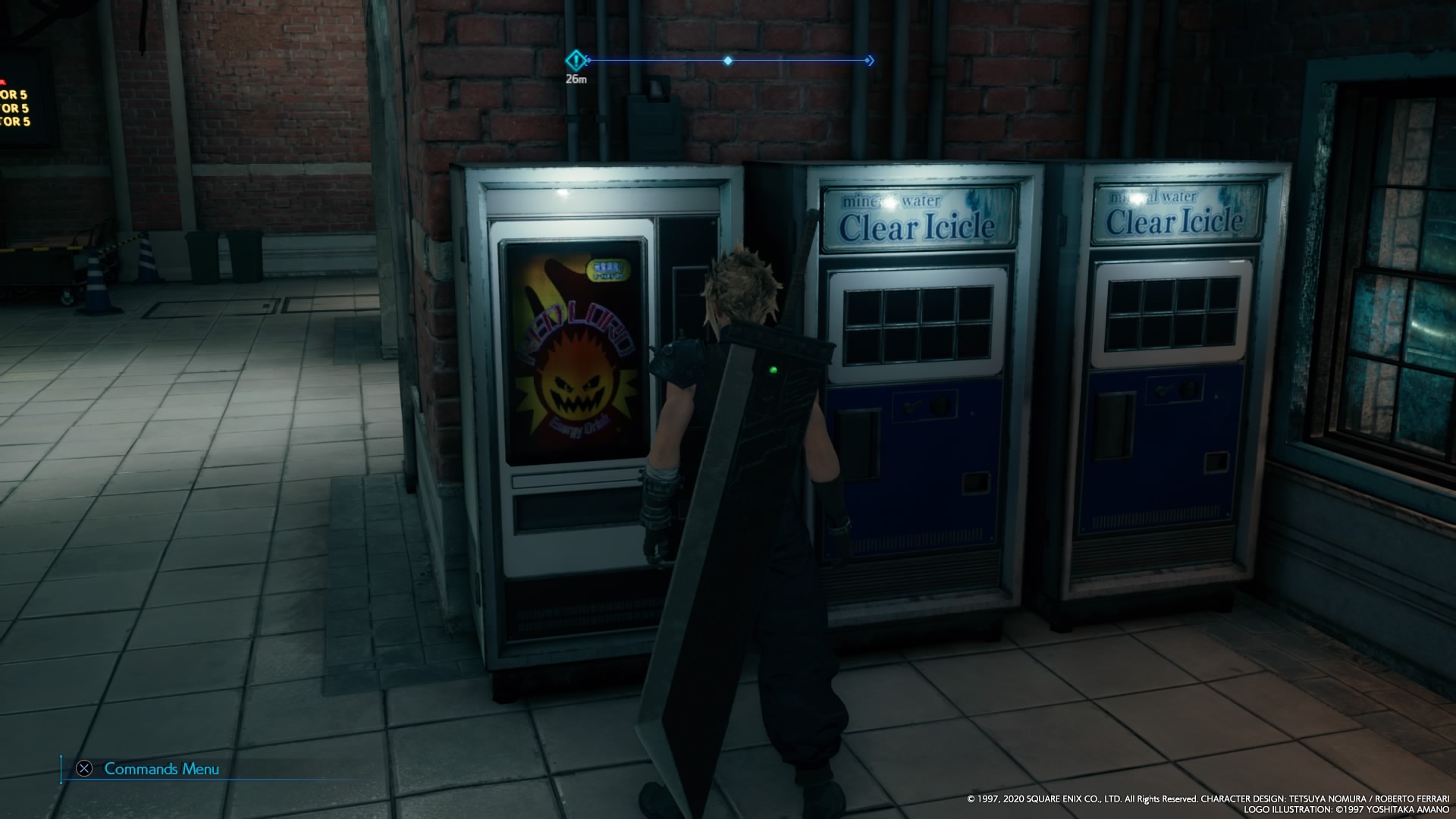 Some company propaganda... And also a poster for the Icicle Inn mineral water. Notice the dog mascot and see below... 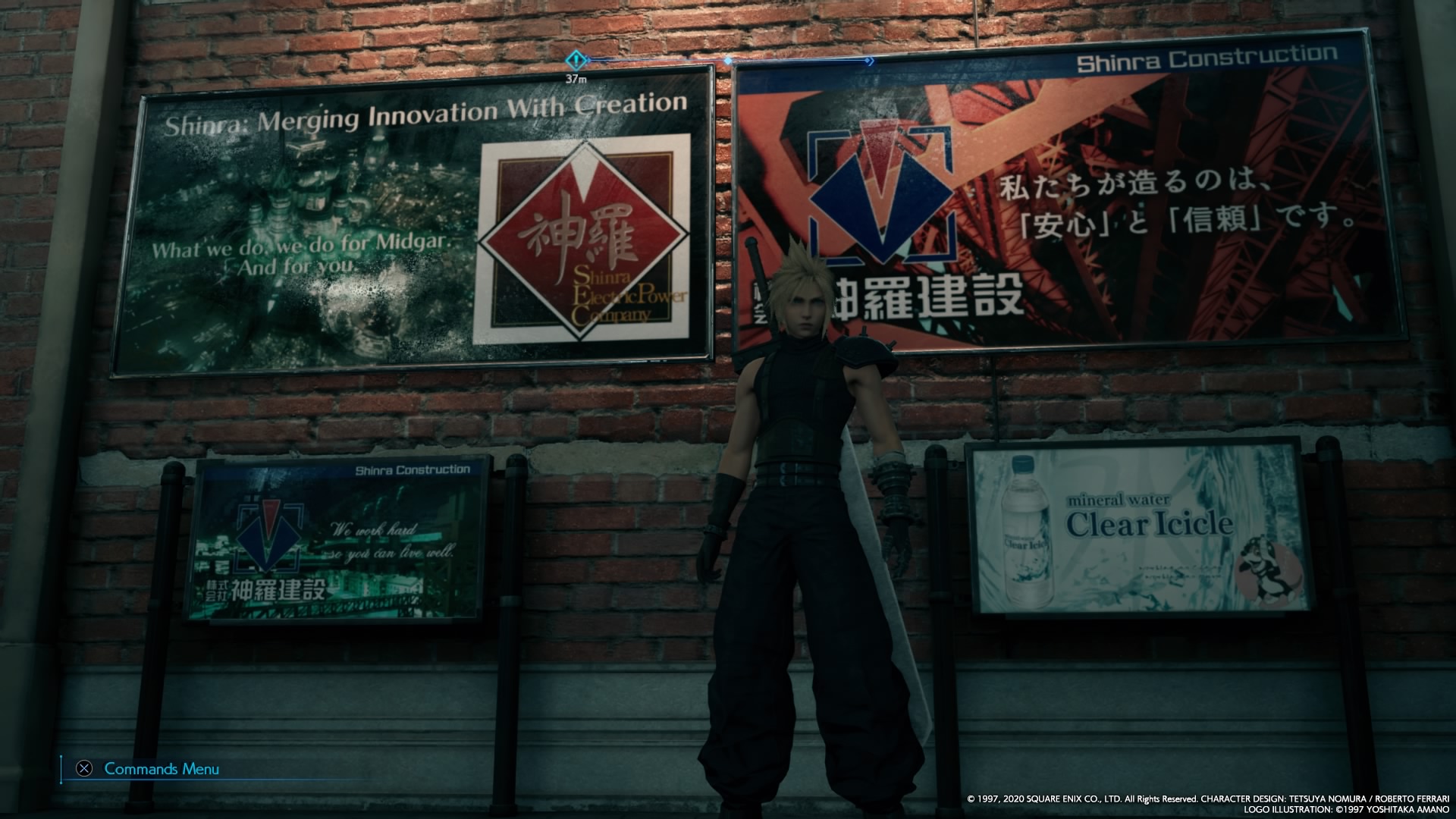 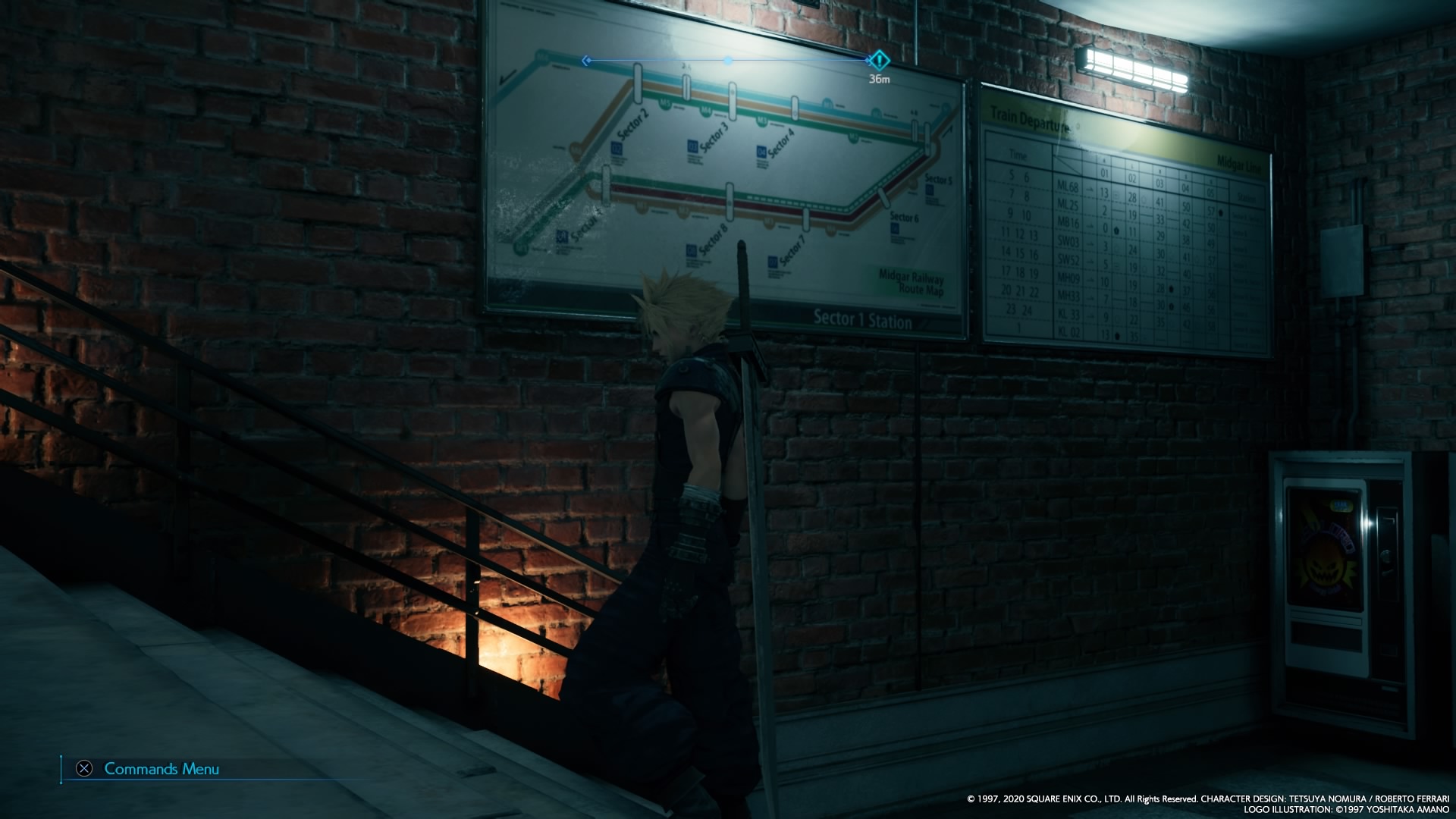 Traditional Asian-style poster, but if you turn your head and look behind the Japanese (I'm presuming these are Kanji characters - not that I myself can read them) then you can actually see the word 'Corneo' in English turned on its side. 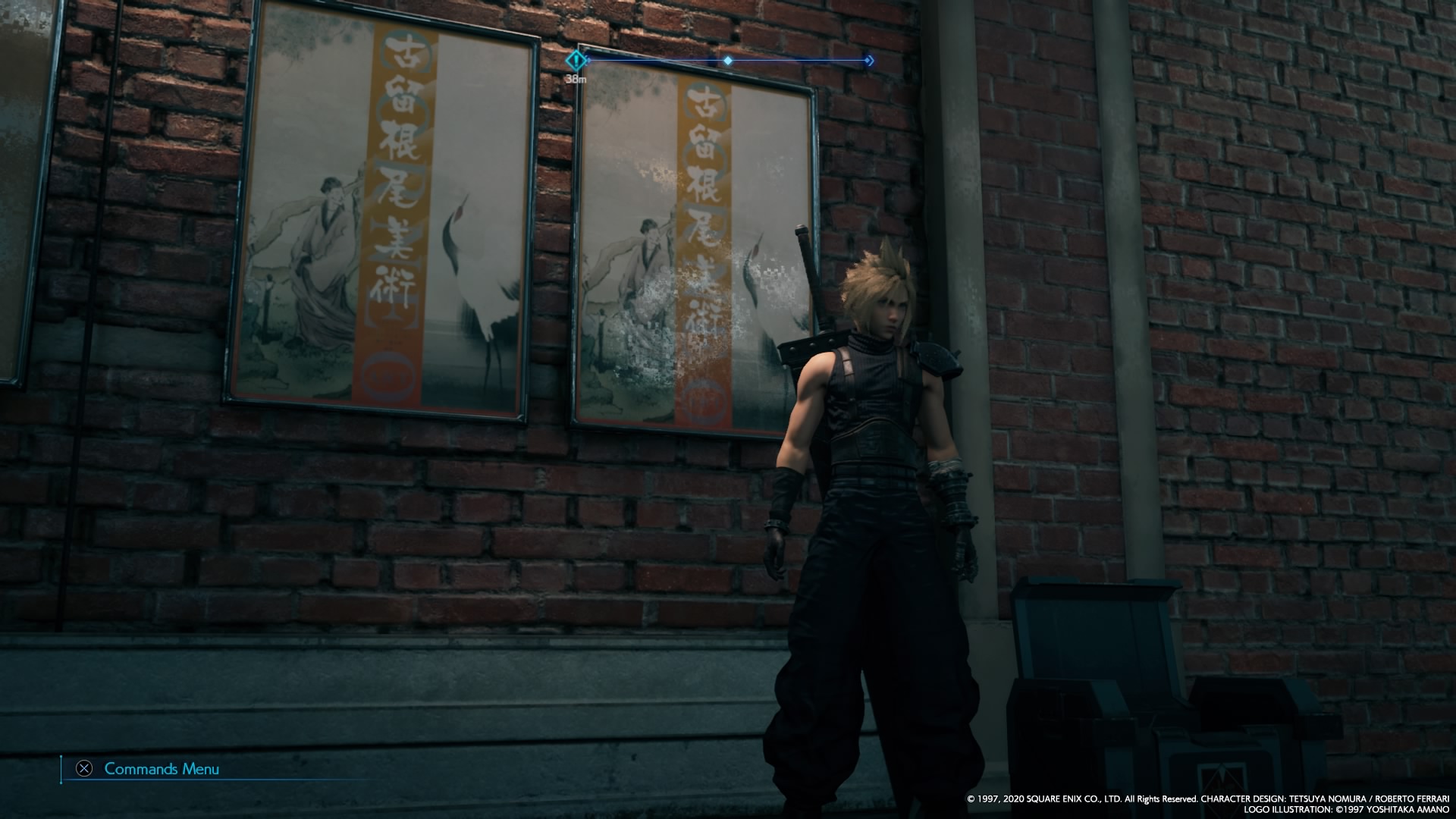 The dog character I mistakenly called 'Stump' in my first post. It seems to be called 'Stamp' instead. It appears to be a popular cartoon character within the FFVIIR universe (and is sponsoring or acting as a mascot for the aforementioned Icicle mineral water). It is a dog with a hat carrying a wounded dog. 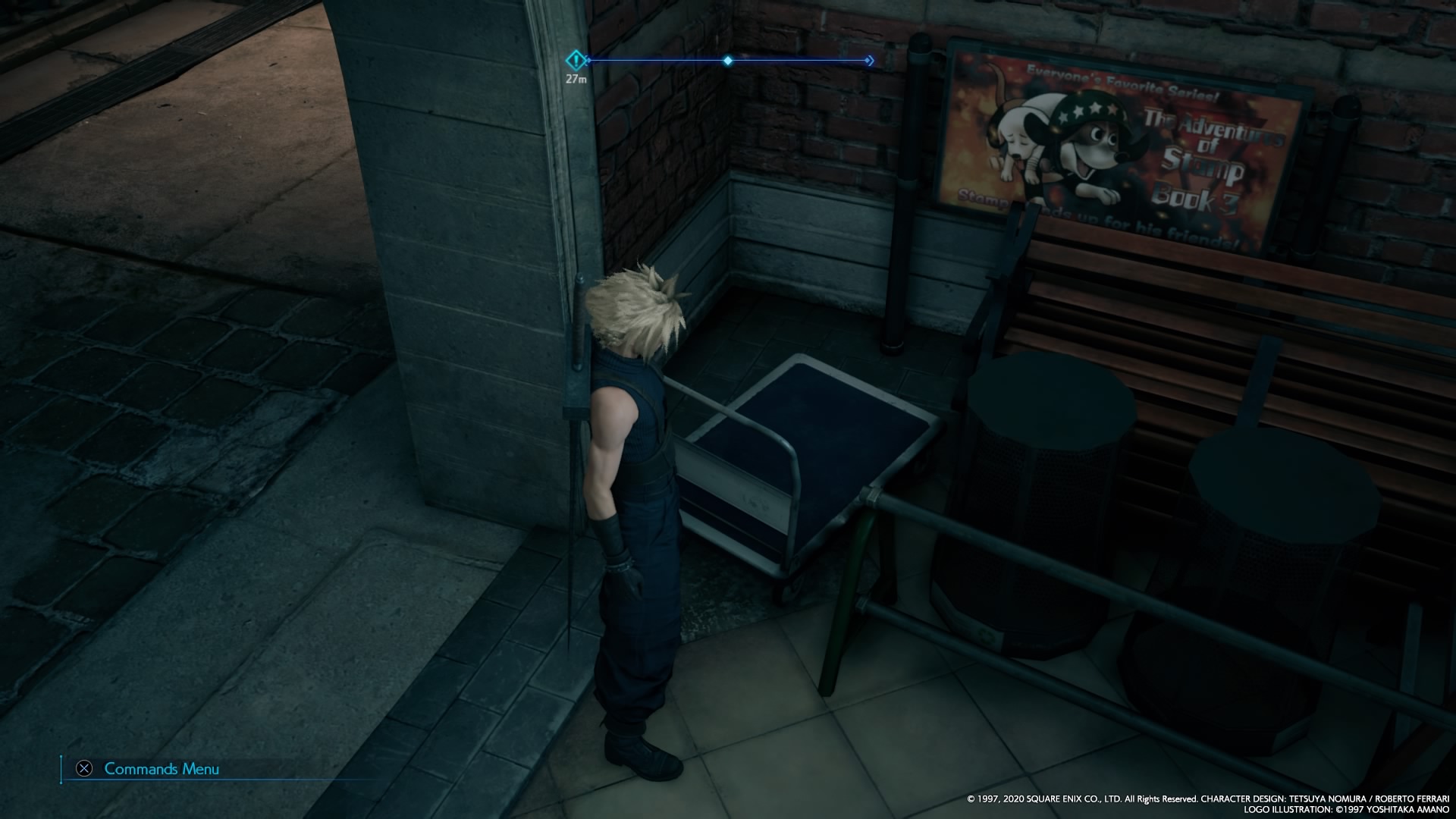 Interestingly I've noticed that Barret appears to call Cloud 'Stamp' several times during the demo. The character appears to be well known enough by the characters for it to be a 'popular culture reference' within the FFVII world. Barret compared Cloud to a dog when he tests whether Cloud might still be loyal to Shinra, and in doing so he calls him Stamp twice.

1st time (on the way into the reactor): 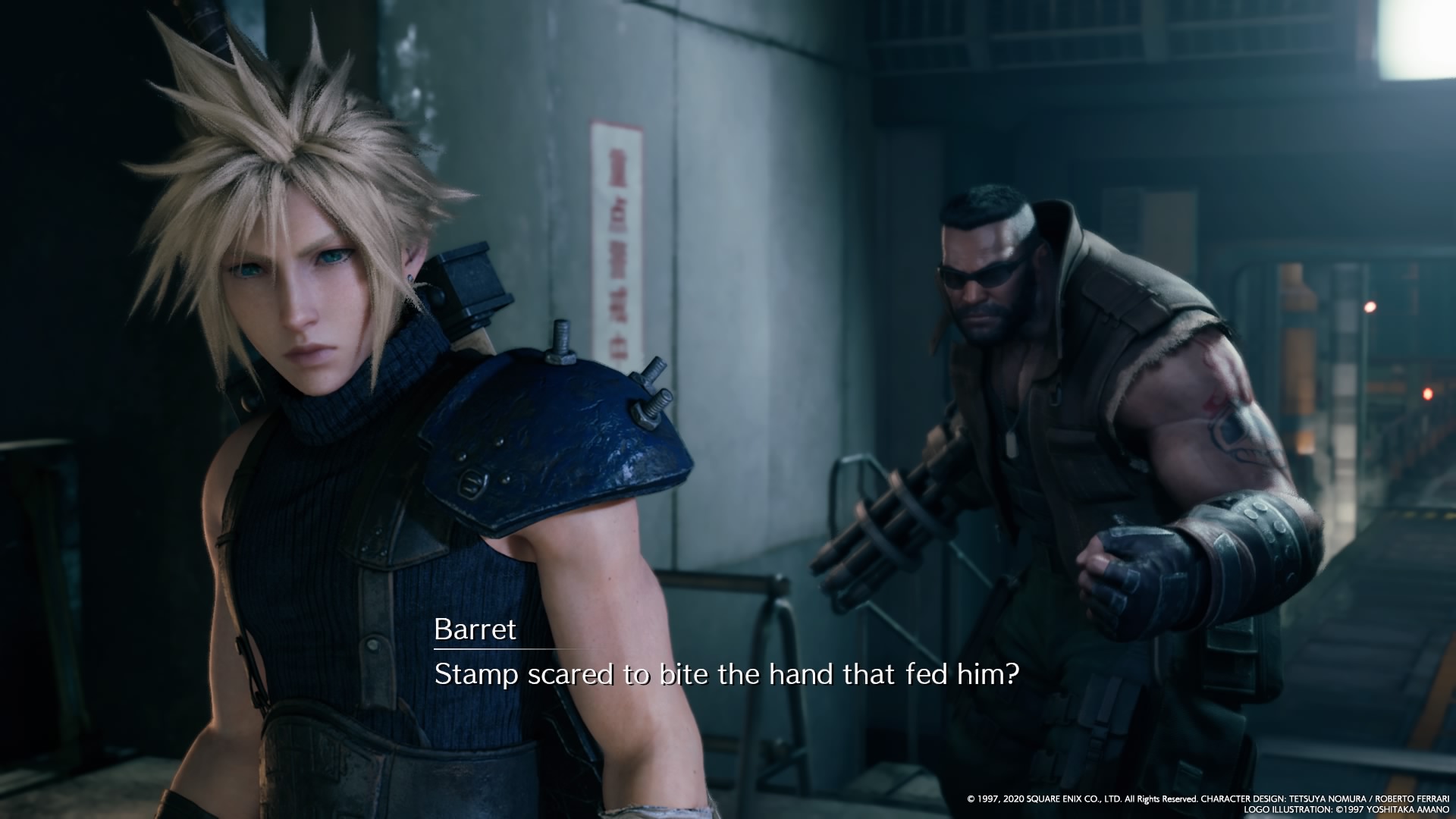 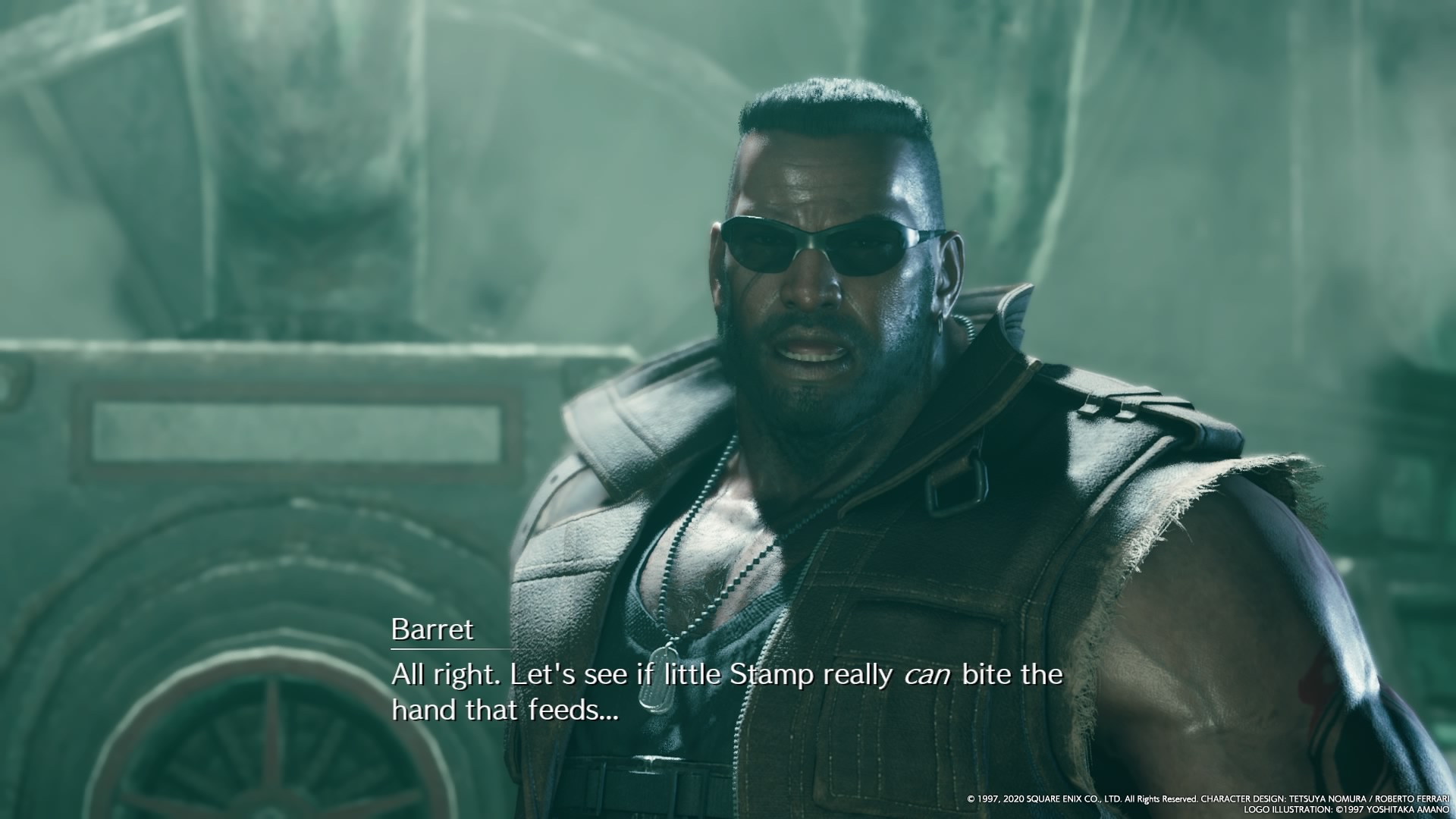 Notice that the dog character is carrying a wounded comrade. This might actually be very clever symbolism for Cloud's identity crisis. Stamp could represent Zack carrying a wounded Cloud, and the fact that Barret calls Cloud Stamp signals that at this point in the story Cloud is assuming elements of the persona of Zack (as we know he did in the original game).


Then of course there is LOVELESS. 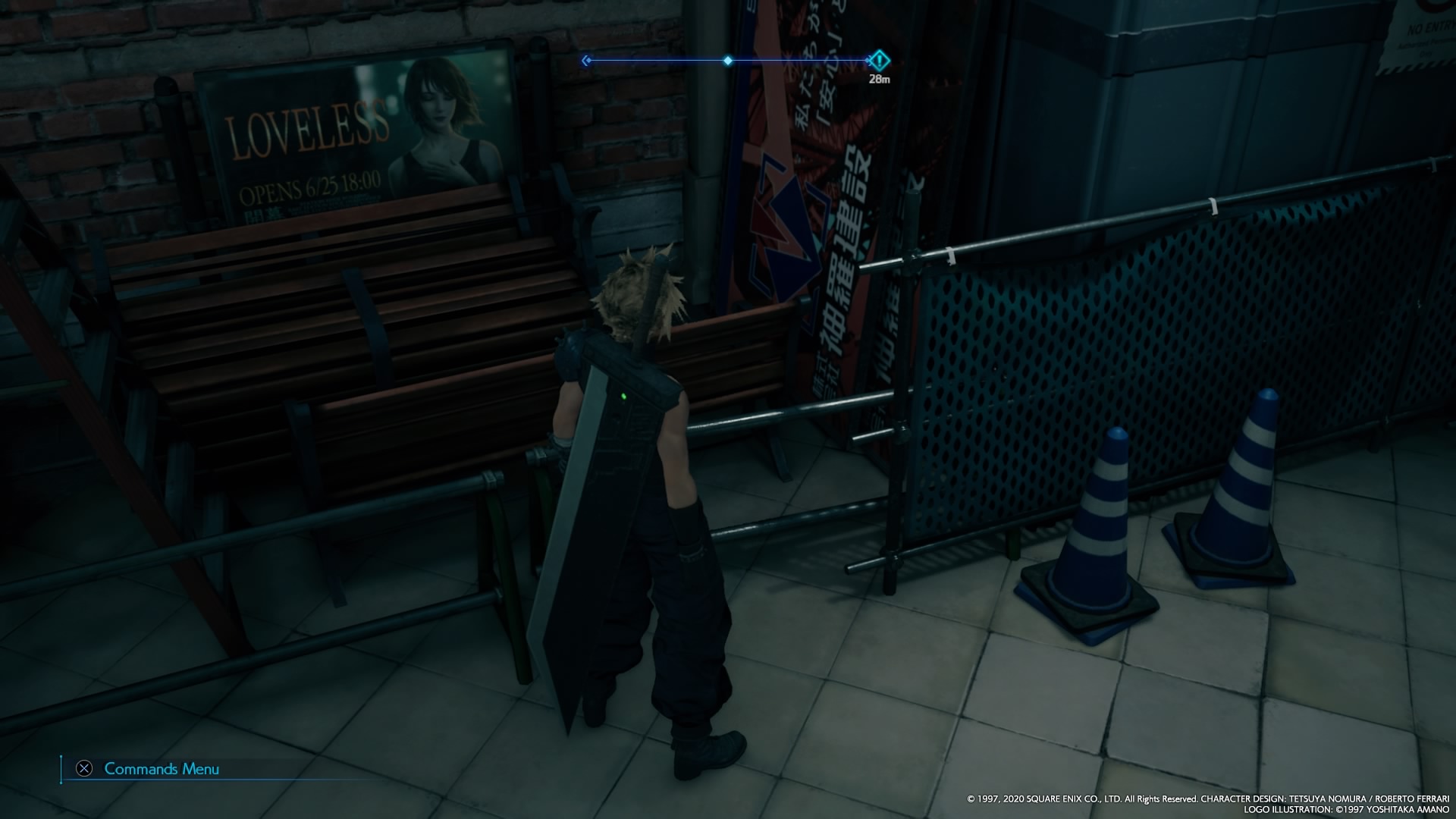 I do think they've been quite clever with these little details. They've fed us quite a bit of information, but cryptically.
My friend the author Mo Gallagher posted a free podcast recently. It's a great breakdown of the demo and I listened to it the other day so I thought I might as well share it in this thread too.